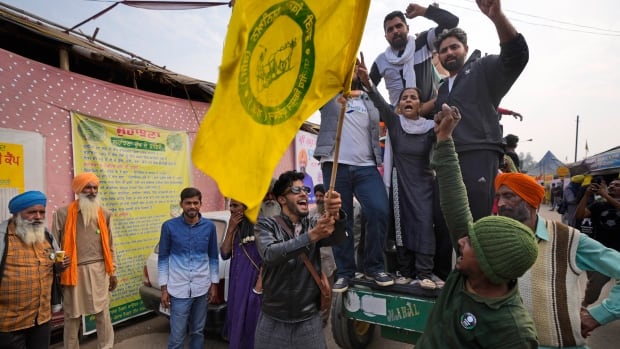 Indian Prime Minister Narendra Modi’s sudden announcement to withdraw the country’s highly controversial farm laws is greeted with cautious optimism by many Indians in the Diaspora in Canada. But some say they won’t feel any relief until the laws are officially repealed.

The surprise move comes more than a year after Modi’s Bharatiya Janata party government instituted the laws, first by ordinance and then passing them without consultation with farmers’ unions or state governments.

The agricultural acts sparked a year of massive, sometimes deadly protests in India, in which tens of thousands of farmers took part in a march towards the capital.

There were also protests in Canada, including rallies outside the Indian Consulate in downtown Toronto, where hundreds of people gathered in solidarity with Indian farmers, who were in many cases their own family and friends.

Opponents of the laws have said they signify an end to guaranteed prices, forcing farmers to sell their crops to companies at lower prices and leaving them no right to bring disputes with those companies to court, the disputes being rather, regulated by bureaucrats.

Modi did an about-face on Friday, who promised the laws will be repealed from December.

“I mean with a sincere and pure heart that maybe something was missing from our efforts that we couldn’t explain the truth to some of our fellow farmers,” he said in a televised speech.

‘A crack’ in the building

At the Shromani Sikh Sangat temple in east Toronto, Gurshan Singh, who comes from a farming family, was suspicious of the announcement.

“I don’t think it’s done because the prime minister announced it would be repealed, but the process has yet to take place,” Singh said in Punjabi, speaking to CBC News via a interpreter.

Singh said his entire village had come out to protest the laws.

“People were martyrs, people lost their children,” he said. And while some 700 people are believed to have died in the process, he said he was grateful his own family was safe.

For Sanjay Ruparelia, professor of politics and public administration at Ryerson University in Toronto, the sudden news is part of a much larger story of the rise of autocracy in India over the past seven years.

“I think a lot of people want to see if this movement has now made a crack in this edifice,” he said.

But farmers have good reason to be skeptical after the government’s efforts to ward off the protesters, going so far as to suggest they had been infiltrated by Sikh separatists, he said.

“There is no truth to these claims. The government just wanted to delegitimize and undermine the protests, and this really made the situation worse and sowed even more mistrust among the farmers’ unions,” Ruparelia said.

“They already felt that they had not been consulted on these laws, they already believed that the laws would harm their interests and now they were portrayed as terrorists and anti-national forces.”

In recent years, the opposition parties have won victories in some state elections, but have not been able to “really weaken the party’s domination and in particular its Hindu nationalist program,” he said. declared.

In that sense, he said, this victory could be a turning point, Ruparelia said.

Between perceived mismanagement of the COVID-19 pandemic, controversial farm laws and slandered civil society groups, trust in India’s federal government is shattered, Ruparelia said. And with elections coming up in two important states, Punjab and Uttar Pradesh, the government may have feared losing its grip on power.

As for the impact in Canada, he said, the reaction here will certainly be mixed.

“There are many, many citizens and residents of Canada who are part of the larger diaspora with very strong ties to regions of the country, who have really led this movement,” he said.

Jaskaran Sandhu, director of administration for the World Organization of Sikhs, agrees.

For the past year or so, Sandhu says he has watched the protests through the eyes of his own friends and family on the ground, while focusing his own efforts in Canada on advocacy. One of his own initiatives, he says, has been to co-found and launch the Baaz News platform, which has made it a priority to highlight the stories of farmers.

Sandhu says he woke up to dozens of messages from family and friends sharing congratulations on the move on Friday morning.

“It’s an outsider’s story. To see them victorious, it’s hard to put into words,” he said. “I think this is a monumental moment for the diaspora.”

But in the midst of this feeling of victory, there is also apprehension.

“No one is getting up and going yet.”

Only unvaccinated blockages come to Europe