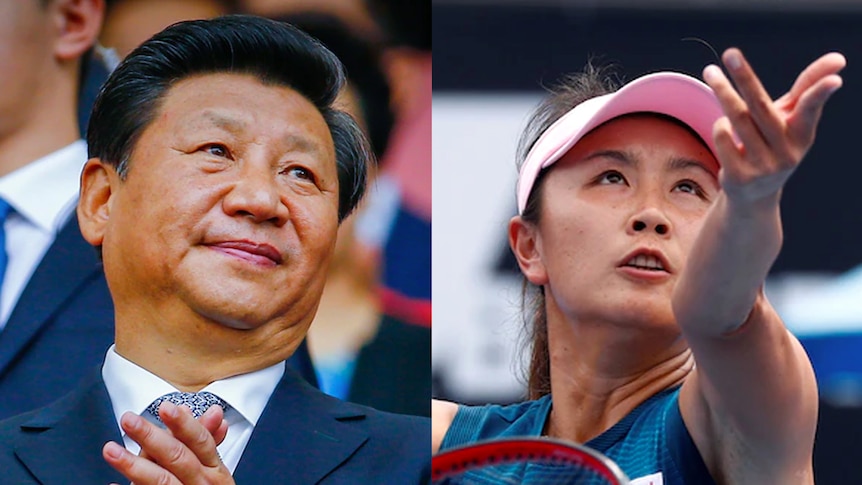 How can a nation so powerful, so demanding in respect, and so quick to intimidate others, seemingly so afraid of a tennis player?

That’s the point: the “truth” is hard to find in China. There is no freedom of expression, no free and open media, no rule of law as we understand it. The Communist Party determines what “truth” is.

What we do know is that Peng published an anguished article about his relationship with Chinese Vice Premier Zhang Gaoli. Detailing their ten-year affair, she accused the 40-year-older senior official of forcing her to have sex.

Then the tennis star fell silent. The message has been deleted. His fellow tennis players and world tennis officials demanded proof of his safety.

Videos have since emerged showing her apparently safe and sound. She also spoke with the president of the International Olympic Committee Thomas Bach, assuring him that she was “free”.

But is it? Is she under pressure? Is she threatened?

We cannot know. But if history and my personal experience are any guide, we can be sure that Peng Shuai is under tremendous pressure.

What we do know is that China is “disappearing” people speaking out or crossing the line. Journalists, lawyers, activists are locked up or under house arrest without any recourse.

Australian journalist Cheng Lei has been detained for over a year, arrested on allegations of disclosure of state secrets. She is separated from her family and her fate remains unknown. Peng Shuai disappeared after making an explosive #MeToo statement about a senior government official on social media. She joins a growing list of missing people.

When I reported from China for CNN, it was common for people I interviewed to be intimidated, threatened, sometimes themselves detained. My colleagues and I have been threatened. We were repeatedly physically assaulted by plainclothes police and detained and interrogated.

If Chinese censors didn’t like our reporting, which was almost all the time, our stories would be obscured on TV.

China cannot be a great nation if it cannot trust its own people.

Over a decade ago, China Watcher Susan Shirk dubbed the country “the fragile superpower.” China, she wrote, was “strong abroad but weak at home.”

Shirk said the regime lacks legitimacy. This vulnerability made it volatile and potentially dangerous. Shirk wrote that she feared China might “behave recklessly in a crisis with Japan or Taiwan and bring it into a military conflict with the United States.”

Since then, the stakes have only increased. Xi Jinping doubled down on authoritarianism. He crushed protests for democracy in Hong Kong, locked Uyghur Muslims in what has been described as genocide, erased dissent within the party and changed the constitution, paving the way for the life presidency.

He threatened Taiwan with war. He froze countries like Australia and used trade as a weapon. He believes history is on his side.

“Respect out of fear is never genuine”

Yet this same seemingly all-powerful leader is also fearful. He is wary of rivals. He is hypersensitive to criticism. He is locked in Beijing, afraid to leave the country even to attend the recent COP26 climate conference.

Xi is modeled on the great revolutionary leader, Mao Zedong. Like Mao, absolute power makes Xi paranoid. Mao couldn’t even trust those he was close to. He turned the country upside down in a cultural revolution because he trusted only chaos.

Xi demands respect. He wants the world to recognize and acquiesce in Chinese power. He wants the people at home to see him as the great leader who completed what Mao started. He wants to fulfill the Chinese dream: to bring him back to the pinnacle of world power and reverse a century or more of national humiliation.

Yet right now, a young tennis player is revealing the insanity of China’s claim to greatness. Until she is allowed to speak openly, to post whatever she wishes, to appear and travel as she likes, then she recalls that China is indeed a fragile superpower.

Would Joe Biden be scared and shut up Serena Williams if she dared to write something critical or reveal embarrassing secrets? Let’s not forget that Bill Clinton was impeached due to an investigation into an affair he had, yet Monica Lewinsky has not disappeared. In Australia, someone as outspoken as Nick Kyrgios is free to say, write, do whatever he wants.

This is freedom, this is the freedom to think or write without fear.

However, China is not a democracy. He doesn’t have our traditions of freedom. But Xi Jinping believes his system of government is superior. He thinks he has a better role model. Why, then, should Peng Shuai’s revelations now frighten him and the powerful Communist Party?

Xi is a great student of Chinese philosophy and history; he would know the Chinese proverb well: Respect out of fear is never genuine.

Noida will soon have its airport, Prime Minister Narendra Modi will lay the foundation stone in Jewar on November 25 | India News