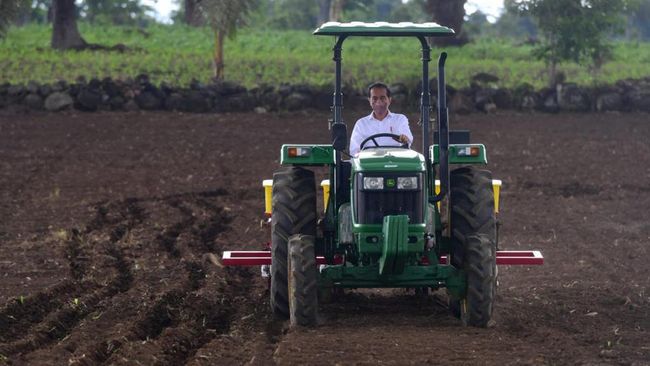 Nico said this was clearly seen when Jokowi preferred to inaugurate an infrastructure project, the Karalloedi Dam, in South Sulawesi on Tuesday 23/11. In this series of activities, Jokowi also tried to drive a tractor to plant corn in Jeneponto regency in South Sulawesi.

On the one hand, WALHI West Kalimantan had “invited” Jokowi to come directly to inspect the site of the flooding in Sintang, West Kalimantan, which had occurred more than a month ago.

“This situation is very unfortunate that the president prefers to go to another area than to an area which has experienced a disaster see-does not have, they don’t care about Borneo. The state no longer cares about Kalimantan, “said Nico CNNIndonesia.com, Tuesday (23/11).

Nico said the presence of the government represented by Minister of Public Works and Public Housing (PUPR) Basuki Hadimuljonodi Sintang was not sufficient. Nico thinks that it is better for Jokowi to go directly to observe the real conditions in the area.

“Although in this context the president invited the Minister of PUPR to review the location [banjir di Sintang], but this is not a comprehensive review of the ecology in Sintang, ”he said.

“This is related to the planning of the speech on the normalization of dredging of the Kapuas River, but not only as a whole,” he added.

Nico said Sintang is just a picture that shows the current situation in Kalimantan. He added that several other provinces in Kalimantan have also been affected by flooding.

“At this moment, the peoples of Indonesia and Kalimantan are threatened. The threat comes not only from war but from natural disasters. We demand the full responsibility of the state to ensure the safety of the Indonesian people,” said he declared.

If you don’t come, prove it in politics

Walhi’s campaign manager for food, water and essential ecosystems, Wahyu Perdana, said it didn’t matter if Jokowi really didn’t want to directly inspect the flood site in Kalimantan. However, he asked Jokowi to be present in the policies that contributed to the ecological disaster.

“In fact, it doesn’t always have to be in the form of visits. Because what we need is a commitment to change policies that are more equitable. If they come but aren’t there. is no policy change, it’s the same, “Wahyu said. To CNNIndonesia.com, Tuesday (23/11).

Wahyu said that with the current disasters, Jokowi should immediately reassess the damaging concession permits. He said Jokowi needs to prove his claims with policies and concrete implementation on the ground.

“Were waiting declarationwhich he called due to changes in land use many years ago. Now he has the authority. I am waiting for the government index to order what is mentioned as the cause of the flooding, the revocation of permits, “he said.

“It’s going back little by little [kecamatan-kecamatan yang berada] on the banks of the Melawi River. Number of refugees 1970 families, 6860 people. There are only 6 sub-districts left, “Benjamin said when contacted. CNNIndonesia.com, Tuesday.