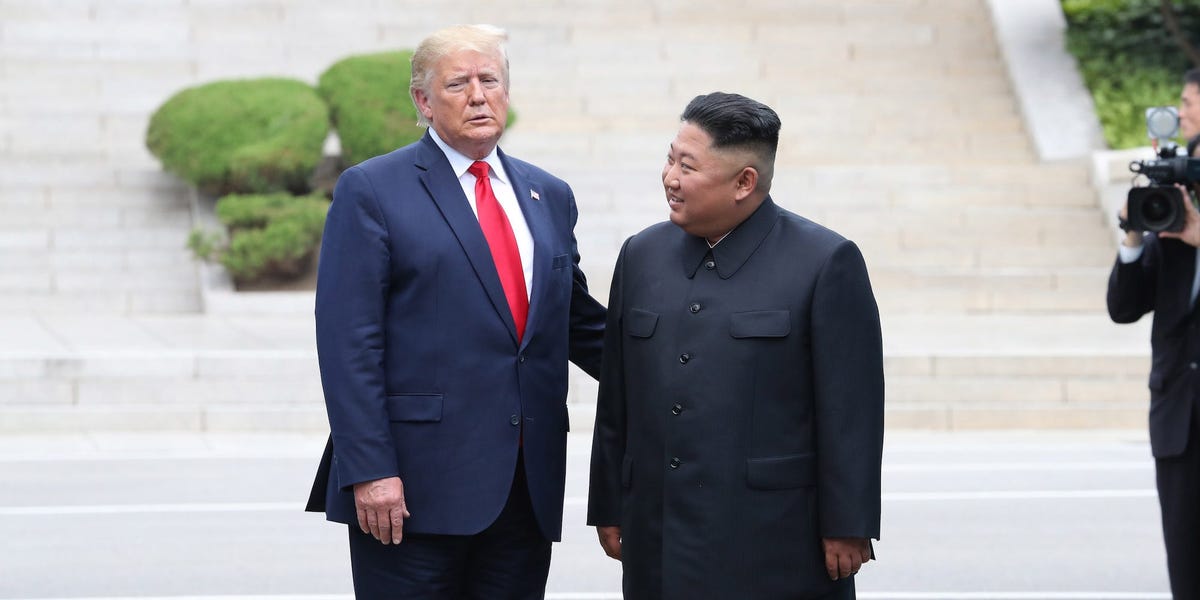 Trump posed for a photo with Kyle Rittenhouse with a photo of him and Kim Jong Un in the background. Trump’s friendly relationship with North Korea’s repressive leader Kim has been widely criticized. Rittenhouse, who was recently acquitted of shootings in Wisconsin last year, has become a far-right hero. Loading Something is loading.

Former President Donald Trump posed for a photo with Kyle Rittenhouse in front of a framed photo of him shaking hands with North Korean leader Kim Jong Un.

During his presidency, Trump met with Kim on several occasions as part of an unsuccessful effort to further the denuclearization of the Korean Peninsula. Early in his tenure, Trump frequently exchanged threats and insults with Kim from around the world, occasionally raising fears of nuclear war. But Trump eventually moved on to characterize the authoritarian leader as a friend, bragging about the “love letters” Kim sent him, often sparking bipartisan criticism in Washington.

Trump, in an interview with Fox News’ Sean Hannity aired Tuesday, revealed that he had hosted Rittenhouse in Mar-a-Lago “a little while ago.”

Trump told Hannity that Rittenhouse was a “fan” of him. “Kyle, I got to know him a bit. He called, he wanted to know if he could come and say hello because he was a fan,” Trump said. Rittenhouse visited the former President’s Florida resort with his mother.

“Really a nice young man. What he went through … was malpractice. He shouldn’t have gone to trial for that. He was going to be dead,” Trump continued. “If he hadn’t pulled the trigger, that guy who put the gun to his head, in a split second he was going to pull the trigger. Kyle would be dead. He’s a very good young man. . “

A Wisconsin jury last week acquitted Rittenhouse of killing two men with an assault rifle and injuring a third, finding him not guilty on five counts.

The deadly shootings took place in August 2020 amid civil unrest in Kenosha, Wisconsin, following the police shooting of a black man, Jacob Blake. Rittenhouse was 17 at the time. Rittenhouse claimed he was acting in self-defense. The fatal incident occurred in the middle of a summer that saw nationwide anti-racism protests, largely sparked by the police murder of George Floyd in Minneapolis, Minnesota.

Rittenhouse has been hailed as a hero by gun advocates and far-right groups, and Republicans like Rep. Lauren Boebert, Matt Gaetz and Madison Cawthorn have offered him internships. Experts and activists have expressed fears that Rittenhouse’s acquittal will embolden white nationalist groups and encourage self-defense.

Is There a Viable Path for Notre Dame to the College Football Playoff? Yes