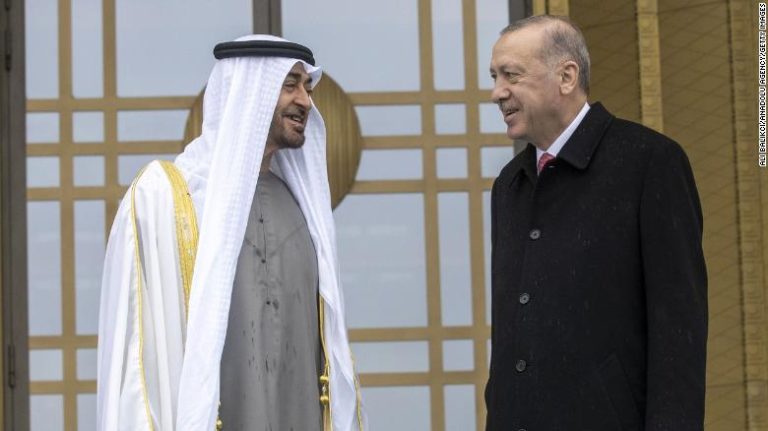 A new vector of immense geopolitical possibilities has exploded in post-coronavirus West Asia with the visit of the Crown Prince of the United Arab Emirates, Sheikh Mohamed Bin Zayed Al Nahyan to Ankara and his meeting with President Recep Tayyip Erdogan on Wednesday.

The Crown Prince, known as MBZ, was on a visit to Turkey after a nearly decade-long hiatus characterized by a period of turmoil in relations between the UAE and Turkey. The nadir was reached when Turkey alleged an Emirati role in the failed 2016 coup attempt against Erdogan, who almost certainly had an American hand.

Visceral hostility followed which came to a head last year when the UAE sheltered a colorful Turkish mobster-turned-whistleblower Sedat Peker, who angered Erdogans and chose to retaliate by leaking information. compromising information on personalities of the Turkish government since its refuge in the Gulf. State Peker is currently based in the UAE and is becoming a hot potato now that MBZ and Erdogan are reconciling and the latter’s return visit to Abu Dhabi is in the cards. Turkish Foreign Minister Mevlut Cavusoglu will travel to Abu Dhabi in December, presumably to set the stage for Erdogan’s visit.

Such a flurry of activity could suggest that this is another desert bloom, a climatic phenomenon accompanied by the proliferation of insects, birds and small species of lizards, which invariably die a death. sudden. But on the contrary, it looks more like the superbloom described by botanists, with a rare chain of events, which makes it an extraordinary event.

Foremost of these events is the devastation caused by the coronavirus which triggered historic changes not only in the global economy but also in international relations. The convulsion is being felt at its most fateful level in the West Asian region where the petrodollar states grope their way out of a deep recession and witness the US retreat in a long and melancholy roar of withdrawal.

Regional states are called upon to adapt to the grim reality. Thus, a common thread linking the various vectors of realignments underway in the region today is that the United States is conspicuous by its absence as a promoter, instigator or catalyst or even as a spoiler in unprecedented situations ranging from normalization constant from Iran to Saudi Arabia, the United Arab Emirates to Syria and Iran or Turkey to Saudi Arabia and Egypt.

The US withdrawal is only just beginning, but it is already having a calming effect on regional policy. A corollary is that states in the region are doing what they can to shield themselves from the turmoil that is sure to spill over into West Asia and Africa at some point if and when US-China rivalries spill over. On US Secretary of State Antony Blinkens’ first tour of Africa, he got a taste of it when he tried to brainwash African leaders with touches of sinophobia, but in return he heard praise to China for its constructive engagement with African economies.

Regardless of whether the United States focuses on the Indo-Pacific, West Asia remains and will continue to be the crossroads of trade routes fueling the global economy. The countries of the region are acutely aware of the lack of regional balance. They began to explore the possibilities of regional consensus wherever possible to promote peace, stability and economic growth.

It becomes an imperative need as Washington’s containment strategy towards Iran unraveled and options become limited, and no regional country wants to revert to a regional phalanx of anti-Iranian states led by the United States. .

Meanwhile, overall confidence in the ability of the United States to lead petrodollar states has collapsed.Saudi Arabia ignoresMessage from President Bidens to pump more oil so Americans can have affordable gasoline for commuting to work or traveling on Thanksgiving and Christmas. Again, despite the ingenious creation of the so-called ministerial grouping known as the Indo-Abrahamic Accords United States, Israel, United Arab Emirates and India by Blinken, theThe United Arab Emirates have also taken a standsimilar to the Saudi refusal to increase oil production to lower the price of oil for the American consumer. Interestingly, Iran’s top nuclear negotiator Ali Bagheri Kani met with senior Emirati officials on Wednesday.

Yet the UAE’s dialogue with Iran comes at a time whenABC News reportsthat the United States and its allies, including Israel, are already debating a list of Plan B options if the next negotiations due to start in Vienna this weekend fail.

The general assumption that the UAE is a counterrevolutionary state determined to undermine social movements and rising powers trying to transform the status quo or any potential for change in the region is probably worth considering. Fundamentally, its foreign policy emphasizes maintaining regional stability, which results in a stable and calm region, which prevents the UAE from being engulfed by regional disorder.

The UAE’s policies from Qatar to Libya can be seen as primarily defensive, that is, moderation is key to maintaining regional order and its own security. moderation or that it is difficult to reconcile the idea of ​​moderation with the brutal civil wars in Libya and Yemen.

That said, the UAE’s rapprochement with Damascus (alongside its detente with Iran) offers interesting possibilities for post-conflict reconstruction in Syria. Likewise, the UAE’s diplomacy at the highest level to engage in constructive dialogue, reduce tensions, find common goals and strengthen economic ties with Turkey also opens up transparent possibilities.

Thus, MBZ’s visit to Ankara highlighted the keen interest of both countries in promoting investments in sectors such as technology, transport, health, energy and food security. After the talks, the UAE announced a $ 10 billion fund for investments in Turkey to support the Turkish economy and boost bilateral cooperation between the two countries, with a focus on strategic investments, especially in sectors such as energy, health and food.Read more

The Turkish economy is in dire straits and for Erdogan it is crucial that the crisis is effectively tackled before he runs for a renewed term in the 2023 election. The UAE’s calculation is also driven by economic considerations . Turkey is a large and lucrative market. With the devaluation of the pound, Turkey is now an excellent place to make investments that will pay off in the short and long term.

What distinguishes a superbloom from the transient desert bloom is that it is a botanical phenomenon in which an unusually high proportion of flowers whose seeds have remained dormant in the desert soil germinate and bloom in about the same time. There are rumors that the UAE will buy a significant amount of Turkish defense products.

Neither Erdogan nor MBZ made any statements after their talks yesterday. But the fact that they have met and plan to meet again soon indicates a shared belief that past animosities can and should be quelled.

Granted, there is a big picture here. The tenuous network of Gulf alliances anchored in strong and unwavering American support has been unraveled; The UAE equations are evolving; the general weakening of popular Arab movements has mitigated the UAE’s perception of the threat to Turkish foreign policy.

On the other hand, for Turkey, its isolation in the eastern Mediterranean and the growing frictions in relations with Russia make it necessary to improve relations with regional states. Even though Turkey’s normalization with Saudi Arabia and Egypt is slow to bear fruit, the UAE has seized the opportunity to reach out to Turkey and normalize relations relatively quickly.