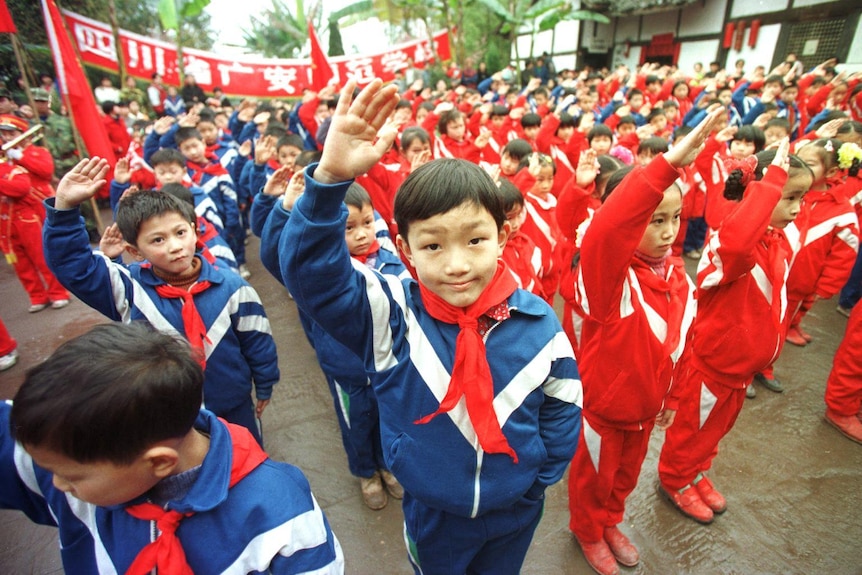 When Chinese students returned to class in September, they received a series of new textbooks describing the political philosophy of Chinese President Xi Jinping or “Grandfather Xi”.

Each textbook on “Xi Jinping’s Thoughts on Socialism with Chinese Characteristics for the New Era,” the official name of Xi’s political philosophy, is suitable for students in elementary, middle, and senior levels.

“Thoughts of Xi Jinping” was enshrined in the Constitution of the Communist Party of China (CCP) in 2017.

Although the main objective is to remain committed to reform and the construction of a “prosperous society”, the reality of this political philosophy is the tightening of party discipline and the restriction of social freedoms.

While the previous textbook focused on the Chinese Communist Party, the new version focuses on key Chinese leaders.

In this way, they are deemed to reflect the burgeoning cult of Xi Jinping’s personality and eerily reminiscent of the days of China’s founding father, Mao Zedong.

According to the National Textbook Committee of China, “This manual reflects the wishes of the Chinese Communist Party and the nation to have a direct impact on the direction and quality of talent development.”

In particular, the Committee stated:

Prosperity, patriotism and friendship are some of the core values ​​of socialism highlighted in the manual.

By targeting children, the nickname “Grandfather Xi” is part of an ongoing strategy to create a cult in China.

Authoritarian regimes such as the Soviet Union also used the grandfather, “Grandfather Lenin”, in their propaganda aimed at children. This increased the cult of Lenin’s personality throughout the Soviet state.

Like Lenin, Mao Zedong’s cult of personality emerged during the Chinese Cultural Revolution (1966-1976).

Leaders Deng Xiaoping, the architect of China’s economic reforms, and Wen Jiabao, who became Prime Minister between 2003 and 2013, are known as “Papy Deng” and “Papy Wen”. However, they do not openly promote this image.

Xi reminded people of Mao in his efforts to build a personality cult around him. Since coming to power, he has developed an image of a “man of the people” in an attempt to make his authoritarianism more evident to the masses.

New primary school textbooks emphasize Xi Jinping’s wisdom, kindness and concern for children. The first signs of this strategy were seen in government propaganda videos, Grandpa Xi is our great friend, which circulated online in 2015.

The video was recorded at Yan’an Yucai Elementary School in Shaanxi. This location is important because the school was founded by Mao Zedong in 1937.

In the video, Xi is not shown as a distant authority figure. On the other hand, Grandpa Xi is a caring “great friend”. The children sing that her “warm smile” is “brighter than the sun”. Exhibits of children waving sunflowers and lyrics describing Xi’s visit as “better than the heat of spring” serve to emphasize his friendly nature.

Most importantly, the children sang about the need to “study hard” to “achieve the Chinese dream”. This dream is Xi’s vision for China to become a prosperous society.

The children wear red scarves and red stars in the video. These symbols represent the national flag. The color red signifies the blood of revolutionary martyrs. They remind children of their relationship with the nation and the Party.

Xi wears a red scarf in the video. In one scene, he places a red scarf over a child’s shoulder. These props and movements are also described in the 2021 elementary school textbook. Wearing a shawl on a child means that children are happy to realize Grandpa Xi’s vision.

The textbook for elementary school students contains pictures of Xi planting trees with the children and visiting them at school.

The books contain statements such as:

Xi shared moving memories of joining the Chinese Young Pioneers of the CCP Youth Organization in 1960. He then invited readers to describe their own feelings about being a part of the Young Pioneers, thereby encouraging the young people. to join.

Textbooks use comic book illustrations to make the ideological content more interesting. In some illustrations, there are students sitting at desks teaching each other about Grandfather Xi’s hopes of being “good moral” and “diligent and frugal” people.

The books also stress the importance of developing knowledge about “science and technology”, as well as being “creative and innovative”.

Children must develop good civic identities to become what the book calls “quality builders and successors of socialism”. The rhetoric of children as the hope of this nation has been used since the late 19th century.

The emphasis on “qualifications” suggests that children must meet the expectations set by Xi. Textbooks suggest this was only possible because Xi’s grandfather continued to take care of them.

It also highlights the violence of children who fight for socialist causes. Barisan Muda Merah sang patriotic songs and read the Little Red Book. This ritual promoted the cult of Mao’s personality.

It remains to be seen whether this new school curriculum is a sign of Xi’s deification in the future.

Shih-Wen Sue Chen is a Lecturer in Writing and Literature at Deakin University. Sin Wen Lau is a lecturer in Chinese studies at the University of Otago. This story was first published in The Conversation.

This article was produced by Mariah Papadopoulos of ABC News.

Trump pulls strings behind the scenes to help loyal 2022 candidates