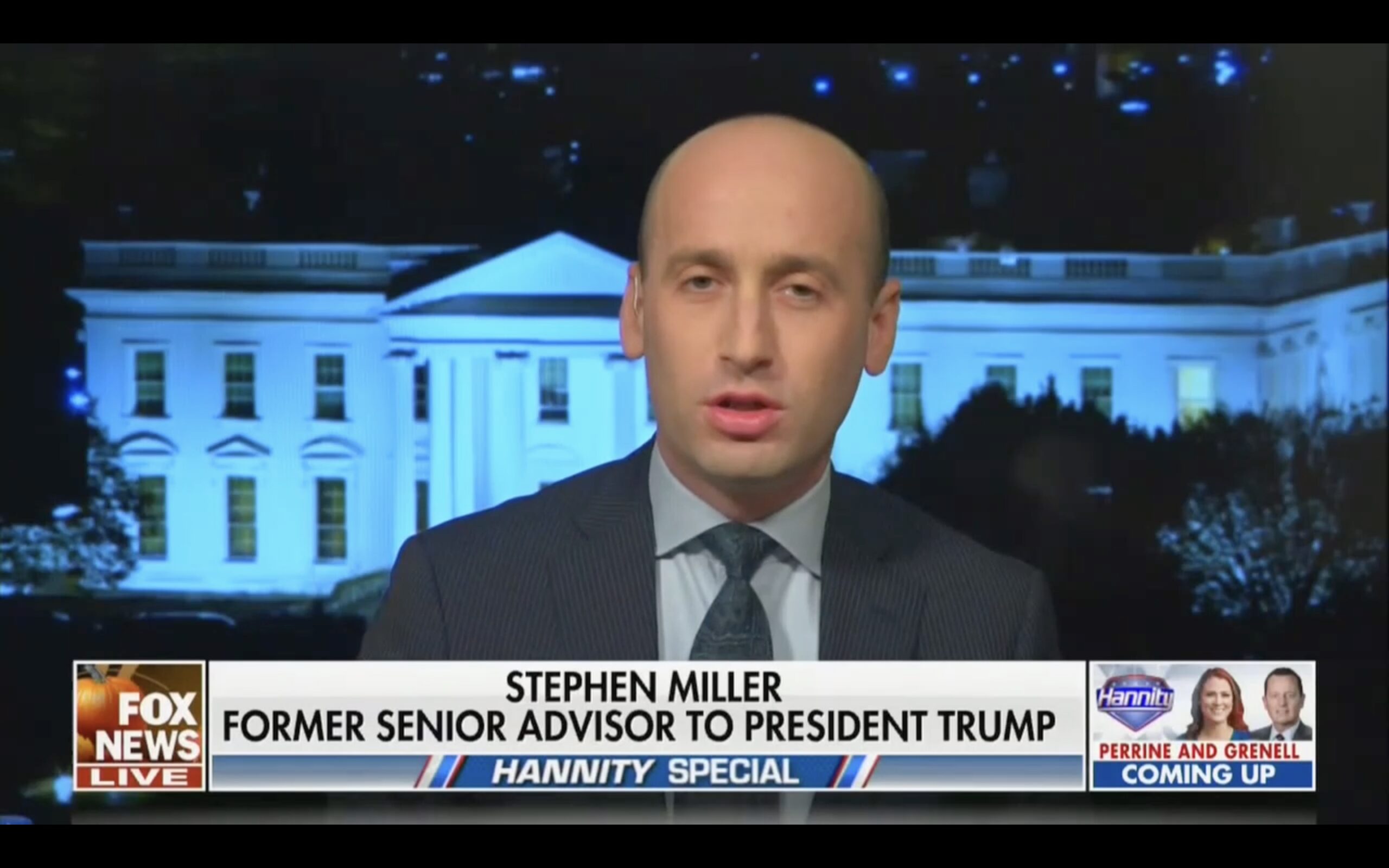 In an appearance on Hannity on Friday, former White House senior adviser Stephen Miller absurdly stated that if former President Donald Trump was still president, “we would have changed the vaccines by now” to cope. to the new Omicron Covid-19 variant.

Yes, to be clear, Miller is talking about the Omicron (B.1.1.529) variant of SARS-CoV-2 that was first reported to the World Health Organization by South Africa on Wednesday, and named as a “variant of concern” (VOC) by the WHO earlier on Friday, just hours before it decided to make the absolutely ridiculous claim on a nationwide TV show. “The first known confirmed infection with B.1.1.529 was from a sample taken on November 9, 2021,” the WHO wrote in its statement.

Guest host Tammy Bruce said the current vaccine boosters were “for the alpha version” and “were not adjusting” like the flu shots were for annual strains of the influenza virus.

“So it looks like we’re rushing when we don’t even know what this new variant is going to do,” Bruce said. “But really, a lot of it, we can’t deny, has been so political. Do you see any politics in there? Is this another dynamic about fear? “

“By the way, if President Trump were still in office,” he said, “we would have already changed the vaccines that deal with the new variant. “

Miller credited Trump with bringing in vaccines “in record time” and “just as importantly, President Trump has placed emphasis on therapies and treatments – that’s completely out of the question now,” before declaring that the President Joe Biden’s administration was “in check.”

Bruce’s and Miller’s insinuations that nothing is being done to combat the new Omicron variant is blatantly wrong, even at the very beginning of the American response.

Pfizer and Moderna, the makers of the Covid-19 mRNA vaccines that have received FDA approval, announced their strategies on Friday to combat the Omicron variant.

Pfizer and its vaccine production partner BioNTech said that should the Omicron variant prove resistant to their current vaccine, they “expect to be able to develop and produce a bespoke vaccine against this variant in approximately 100 days, subject to regulatory approval Moderna cited a similar 60- to 90-day timeframe to bring new vaccine booster shots to clinical testing.

Contrary to Bruce’s claim that the vaccines had not been adapted to the new variants, Moderna has already developed beta and delta specific boosters.

On Saturday afternoon, Biden’s former senior White House adviser on the Covid response, Andy Slavitt, posted a Twitter thread about the Omicron variant, based on his review of the most recent reports and “briefs conversations ”he had with scientists working on the issue. Slavitt had a similar assessment that mRNA vaccines were designed for “rapid development”, but that still meant “weeks to create, months to produce”.

Miller’s suggestion that Trump somehow might have done something, anything that could have led to a targeted vaccine against a newly discovered variant of SARS-CoV-2 within hours of being designated in as a VOC and only 17 days after its discovery is, of course, absolutely bonkers and devoid of any logical basis in reality.

In addition to the announcements from Pfizer and Moderna, a spokesperson for Johnson & Johnson, the makers of the third FDA-approved vaccine, told Fox Businessin an email statement on Friday that they were “closely monitoring new strains. of COVID-19 viruses with variations in the SARS-CoV-2 spike protein and are already testing the effectiveness of our vaccine against the new, rapidly spreading variant first detected in southern Africa.

One final fact-check: Miller’s claim that Trump had “focused on therapies and treatments” but were “completely off the table now” under the Biden administration, is, again, a times, totally wrong.

In the past two months alone, Merck and Pfizer have both announced the development of promising drugs that significantly reduce the risk of hospitalization or death from Covid-19.

Molnupiravir, an orally administered pill developed by Merck, has been given to adult patients considered to be at higher risk of serious disease and with mild to moderate symptoms. The results showed that patients who received the drug within five days of symptom onset had about half the hospitalization and death rate as those who received a placebo. The very promising results led them to apply for an Emergency Use Authorization (EUA) from the FDA.

Another antiviral pill developed by Pfizer has shown even more astonishing results, reducing the risk of hospitalization or death by almost 90% when given to high-risk adult patients.

Watch the video above, via Fox News.