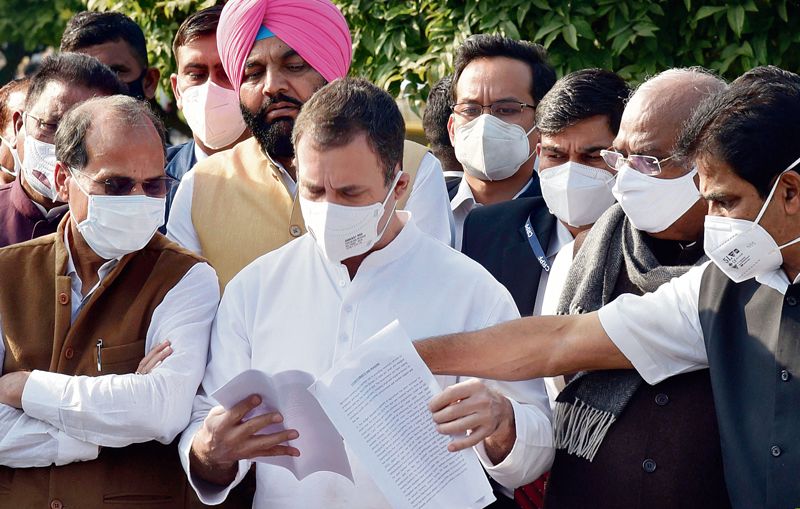 Parliament passed the bill to repeal the three contentious farm laws on Monday, with the government approving it within minutes of its introduction in both Houses and ignoring the opposition’s request for debate.

In his usual speech at the start of the winter session today, Prime Minister Narendra Modi said the disruptions could not be the benchmark of parliamentary performance and urged the opposition to debate in the Chambers in accordance with the aspirations of the freedom fighters.

No need for discussion, also oppn for repeal

The government and the opposition parties are in favor of the repeal of the three agricultural laws. It is therefore not necessary to discuss. – Narendra Tomar, Minister of Agriculture

In Rajya Sabha, Agriculture Minister Narendra Singh Tomar, however, said: “The government and opposition parties are in favor of repealing the laws. It is therefore not necessary to discuss the repeal bill. The Upper House passed the Farm Law Repeal Bill 2021 with a voice vote amid the din after the Lok Sabha also passed the bill at noon. The move came three days after the first anniversary of the farmers’ protests that began in Delhi on November 26, 2020. Parliament enacted the laws last September.

Admitting that the government had failed to convince farmers of the “benefits of the laws,” Tomar said Congress, in its election manifesto, also spoke of agricultural sector reforms.

In both chambers, the opposition insisted on a debate that was not granted on the grounds that repeal bills were conventionally passed without discussion.

However, Congress cited 17 repeal bills that it said have been discussed. In Lok Sabha, MPs TMC, TRS and DMK were in the well when Tomar introduced the bill at noon. President Om Birla said he would allow a debate if parliamentarians returned to their seats, but they did not.

“We wanted to have a discussion about the MSP, the violence in Lakhimpur Kheri and about 700 dead farmers, but it was not allowed. The government is terrified. He does not have the courage to defend his actions, ”said Rahul. He added that the prime minister had apologized to the nation, which meant he accepted that his fault had resulted in the deaths of 700 farmers.

“The government will have to compensate the families of 700 dead farmers,” said Rahul, accusing the Center of insulting the farmers by saying in the repeal bill that “only a small group of farmers are protesting.”

House proceedings are expected to be suspended until a debate is allowed, as opposition parties have said they will continue to insist on a discussion on the legal guarantee of the MSP.

Both houses were adjourned after the passage of the repeal bill without any further legislative programs being discussed today.

The withdrawal bill comes after Prime Minister Narendra Modi’s assurance of repeal on November 19. Once President Ram Nath Kovind gives his assent to the bill, the laws will be overturned.

The explanatory memorandum to the repeal bill, meanwhile, defended the laws as being beneficial to farmers. He noted, “Even though only a small group of farmers protested against these laws, the government has made efforts to educate farmers on the importance of the laws through several meetings. Without removing the existing mechanisms available to farmers, new avenues have been opened for the trade of their products….

“As we celebrate the 75th anniversary of independence – Azadi ka Amrut Mahotsav – the need of the hour is to bring everyone together on the path of inclusive growth and development. In view of the above, it is proposed to repeal the agricultural laws.

From prescriptions to rollback in one year

With little information about Omicron, Biden addressed the travel ban to buy time

the cry of the WHO before the covid