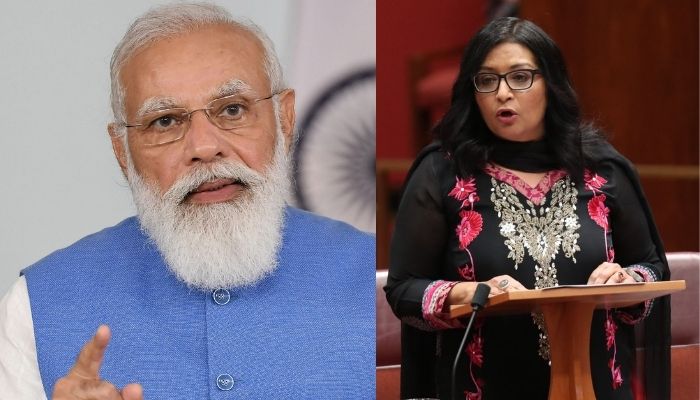 On Wednesday December 1, Pakistani-born Senator Mehreen Faruqi made Hindu-phobic remarks during her speech in the Australian Senate. Faruqi is a member of the Australian Green Party.

During her speech, she said: “When Donald Trump was President of the United States, Prime Minister Scott Morrison was rightly criticized for his close friendship with this white nationalist leader, who has been impeached twice and has tried to win an election. While calling Prime Minister Modi “India’s far-right leader,” the Senator from New South Wales (NSW) said: “Dangerous nationalism and authoritarianism with strong anti-Muslim sentiments and anti-Sikhs have skyrocketed in India under Modi “.

She insinuated: “This escalation of nationalism has also had direct impacts on the Indian diaspora in Australia, as racism and hatred threaten communities that belong to minorities and who have criticized Modi’s agenda. The Pakistani-born senator alleged that community members explained how Prime Minister Modi’s alleged nationalist agenda is being militarized against minority groups on Facebook and WhatsApp. “This includes labeling target groups as terrorist sympathizers, rapists, criminals and vermin. “

In the Senate today, I urged members of the government and the Prime Minister to condemn far-right nationalist policies and denounce the administration of Indian Prime Minister Narendra Modi. pic.twitter.com/keo5NS9GPj

Mehreen Faruqi went on to say that Prime Minister Modi’s nationalist agenda, as peddled on social media, was the main reason for the attack on four Sikh men in Harris Park in Sydney. “The impact of this hateful policy on many members of our community is of great concern. This is a direct result of the importation of nationalist politics from Modi and the Australian government’s refusal to call him. She also called on other members of the Senate to condemn Prime Minister Modi’s supposed authoritarian regime and his nationalist agenda.

Activists slam the Hindu hatred of the Australian Green party

Speaking of the issue, Sydney-based Hindu activist Ravi Shankar Dhankar Recount Australia today that the Senator from the Greens tried to minimize her hatred against Jews and Hindus. Mehreen Faruqi is part of this elaborate Green plan that attacks Hindus and Jews for resisting their historic persecution, he said.

According to academic and yoga practitioner Sarah Gates, the Greens have waged an infamous campaign to silence Hindus who are trying to make their voices heard against the persecution. The Green Party and its leaders like Mehreen Faruqi fuel hatred towards those who attempt to speak out against the persecution of Hindus in Kashmir, Pakistan, Bangladesh and elsewhere in the world. Gates also debunked the lie spread by the Pakistani-born senator about the attack on four Sikh men.

What happened in Sydney has no place in Australian society, but Senator Mehreen Faruqi has deliberately chosen to speak the half-truth. Three young Sikhs and a young Hindu were tried in street fighting, however, Mehreen Faruqi didxed the entire Hindu community for the incident. If it’s not blatant Hindouphobia, what is it? she inquired.