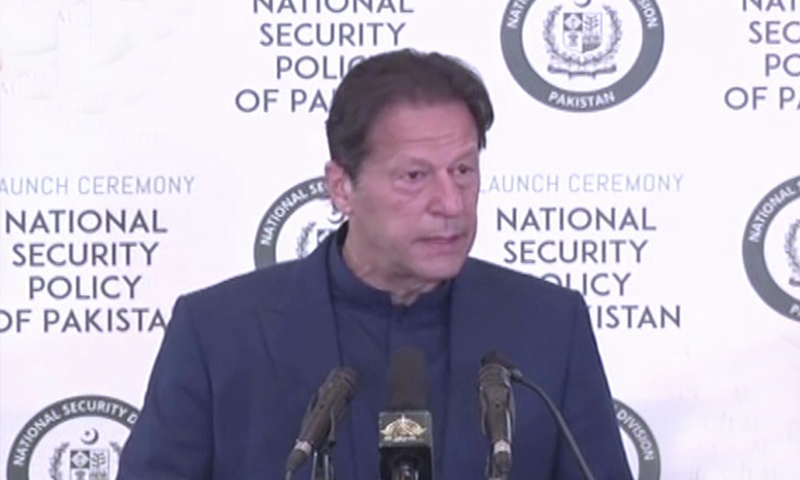 Prime Minister Imran Khan on Friday unveiled a public version of the country’s first-ever National Security Policy (NSP), saying the country desperately needs a multi-pronged strategy for the future to ensure the protection of its citizens and to protect economic interests. .

The NSP was approved by the federal cabinet on December 28, a day after gaining approval from the National Security Committee.

The policy defines the direction the country should take in the coming years. Its creators reportedly took a citizen-centric approach to national security and placed particular emphasis on economic security.

Highlighting the main facets of the policy in his speech in Islamabad today, the Prime Minister noted that the mindset of governments since the establishment of the country was to focus on military security and that they had no never planned beyond.

The country is blessed with well-trained and disciplined security forces that protect territorial borders from warring neighbours, he added.

Prime Minister Imran stressed that Pakistan needs inclusive growth, but “constraints in acquiring loans from institutions like the International Monetary Fund (IMF) are putting the national economy at risk.”

He lamented that the country never had a plan to secure itself economically.

“The concept we have now brought to Pakistan is to ensure the upliftment of the vulnerable segment,” he said, adding that the nation would remain insecure if the rich continued to get richer without no measures are in place to protect the oppressed segment from economic collapse. .

Imran said his government had also introduced health cards, along with the unveiling of a single national program to eliminate resource disparity among the masses.

The Prime Minister also stressed the need to boost exports, saying that no country could prosper economically if its export volume was much lower than its import.

He stressed that the rule of law was equally important for the prosperity of a country. “The reason behind the progress of any country is a strong presence of the rule of law.”

Earlier, National Security Adviser (NSA) Moeed Yusuf said there were very few countries that codified policies like the ones Pakistan has come up with recently. He said part of these policies have been released to let the world know about their main features.

Dr. Yusuf said the NSP is centered on economic security, while geostrategic and geopolitical imperatives also figure prominently in it to enhance Pakistan’s security and position in the world.

He pointed out that the document was finalized after full civil-military consensus.

Later, the NSA thanked “hundreds of officials and citizens involved in the maturation of this document over the years” and the National Security Division (NSD) team for leading this process.

In a series of tweets, he said he was “humbled by the positive response to the launch of the NSP”.

“It’s a proud moment for us, and indeed for all Pakistanis,” Dr Yusuf said.

“The real hard work starts now as we implement the policy and translate the vision that the NSP espouses into a reality. The NSD is fully committed to ensuring this under the leadership of the Prime Minister,” he added .

The NSP document is intended for a period of five years (2022-26) but it will be revised at the end of each year.

The full 110-page NSP document will remain classified. However, a shorter version of almost 50 pages is being published.

The critical analysis of the state of affairs in the various sectors is contained in the main document, and the implementation framework and indicators developed for monitoring and evaluating progress made in the execution of the policy do not are not included in the public version, which, moreover, not specify the various elements of national interest.

In the area of ​​foreign policy, the NSP places equal emphasis on political and economic diplomacy, in addition to making peace in the region the top priority. It further reiterates the commitment not to be part of bloc politics.

At the same time, the defense section highlights the challenges posed by hybrid warfare and cybersecurity threats in addition to questions relating to conventional capabilities and strategic deterrence.

He recommends increasing the size of the resource pie, addressing the external imbalance, and redistributing wealth wisely.

Tricky topics such as accountability, curriculum review, governance challenges including the review of the 18th Amendment to the Constitution and the future status of Gilgit-Baltistan will be part of the classified portion.

Opposition parties have criticized the government for not considering their input when formulating policy.