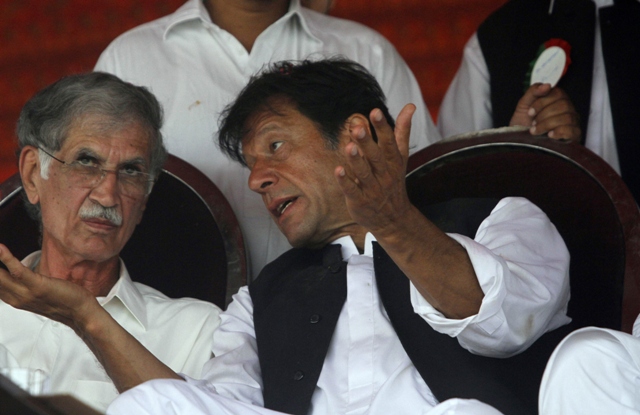 Prime Minister Imran Khan and Defense Minister Pervez Khattak exchanged bitter words on Thursday during a meeting of the PTI parliamentary party and its allied parties.

The meeting was organized to define the strategy for the adoption of the supplementary finance bill, nicknamed “mini-budget”, in parliament.

According to the sources, Khattak rose from his seat three times and criticized Tarin and Hammad.

He accused Hammad of ignoring the gas and electricity problems.

“The province producing gas and electricity [K-P] was deprived of new gas connections,” he complained.

Taking to Twitter on Friday, Hammad Azhar however denied that Khattak criticized him during the meeting. “All statements attributed to Pervez Khattak about me are false and fabricated. He didn’t mention my name or refer to me at the meeting,” he wrote on his verified handle on the microblogging site.

Khattak added that Tarin was unable to satisfy him even in the cabinet.

He told the Prime Minister that unelected people were in cabinet.

He added that the people of Khyber-Pakhtunkhwa elected him prime minister, but they were still the losers the most.

The Minister claimed that there was a ban on new gas connections to KP.

“If this continues, we will not be able to vote for the mini-budget.”

The Prime Minister replied that he would not be blackmailed.

If you don’t want to vote, don’t. If you are not satisfied with me, I will give the government to someone else.

Khattak left the meeting after that and federal ministers Ali Zaidi and Murad Saeed persuaded him to return.

He asked whether or not the security institutions would be affected by the ceding of the autonomy of the State Bank.

“Are we also going to provide the details of the accounts of the security agencies to the IMF? he asked.

The Prime Minister replied that he wanted to make it clear that there would be no compromise on the national interest.

“The protection of our security agencies is the first priority in any case,” he added.

Alam again said people in their constituencies were asking them to provide gas, electricity and water.

“Will we get gas, electricity and water from the mini-budget?

MQM members said basic necessities should not be taxed.

The Prime Minister told them that the government was aware of the people’s problems.

“We will not impose any additional tax which will be burdensome to them.”

Speaking to the media after the meeting, Khattak said he was surprised that such a big storm had come up.

“You people [media] makes so much noise. I tell the media to stop. I only went out to smoke [when he left the meeting],” he added.

“There is a gas problem in our province. I had only raised the issue of shutting down our gas systems.”

The minister argued that we all have internal problems. “There are all kinds of discussions in the party. There were no harsh words. I am not against the Prime Minister and I cannot be.

The Prime Minister summoned Khattak to his room and discussed with him the issue discussed at the parliamentary party meeting. Federal Minister Omar Ayub was also present on the occasion.