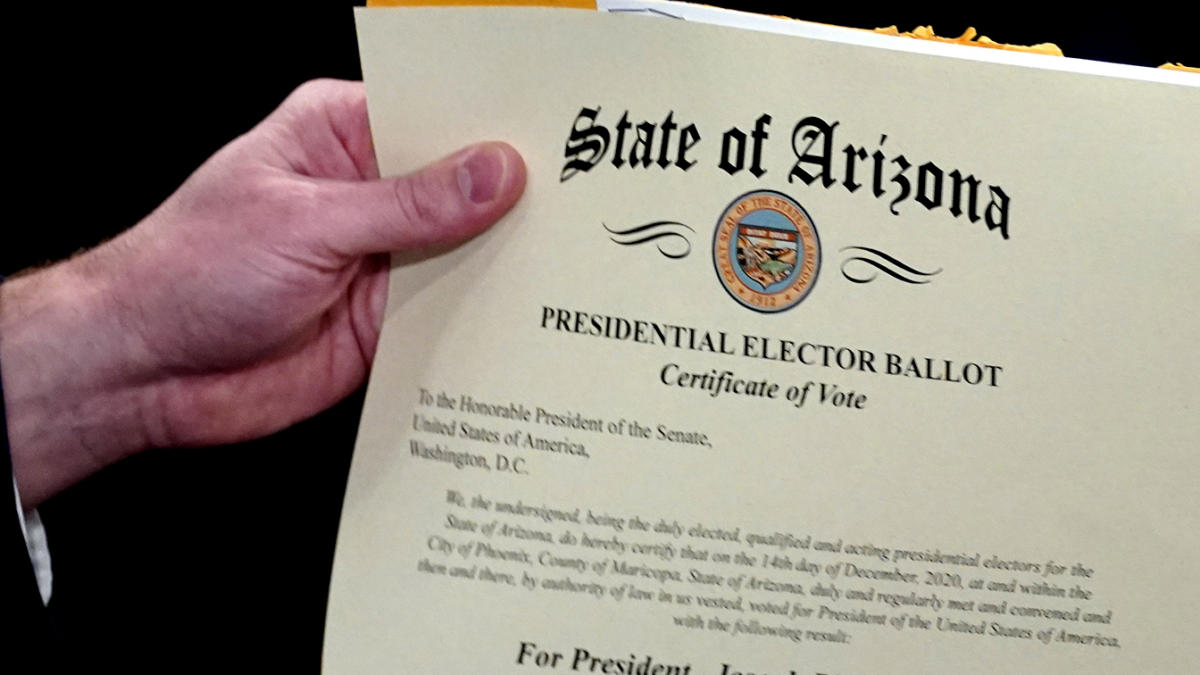 As former President Donald Trump prepares for a visit to Arizona, there has been renewed scrutiny of fake election ballot certificates sent by Trump supporters following the 2020 election.

Trump was originally scheduled to hold a press conference on the one-year anniversary of the Jan. 6 Capitol uprising, but said he would instead speak about the election and the riot at the Jan. 15 rally in Florence. , Arizona. Trump has continued to baselessly claim that the 2020 election was stolen from him, with some prominent Republicans in Arizona pushing the same conspiracy theory.

As Republican Gov. Doug Ducey certified the election with Joe Biden as the winner in December 2020, other party members, including Arizona Republican Party Chairwoman Kelli Ward, pushed a fake voter certificate stating that Trump had won the state. The document was sent to the National Archives, which processes Electoral College certificates before sending them to Congress.

Official Arizona GOP social media accounts promoted his fake document and those of other states with a tweeted video captioned The Signing on Dec. 14 and a YouTube video posted the next day in which Ward said the real voters for the presidency had met the previous day to vote.

Congress is adjourned, Ward tweeted a few weeks later as pro-Trump rioters stormed the US Capitol on January 6 in an attempt to block certification of the election. Return the voter’s choice to the legislatures.

In addition to Arizona, fake voter certificates were sent by Trump supporters in Georgia, Michigan, New Mexico, Nevada, Pennsylvania and Wisconsin. The certificates were released by watchdog group American Oversight last March and began circulating again this week after reporting MSNBC and Politico, as the House Committee investigating the events of January 6 continues its investigation into State-level efforts to overturn the election were coordinated.

One of the 11 Republicans who signed the Arizona document was Jake Hoffman, who had just won a race for state legislature. As Hoffman ran for the seat in 2020, he was banned from Twitter and the marketing company he ran was banned from Facebook for participating in what was called a pro-Trump troll farm where teenagers posted in favor of Trump and promoted conspiracy theories. on elections and the coronavirus. The effort was reportedly affiliated with Turning Point USA, a prominent Arizona-based conservative youth organization.

The Electoral College vote certification for the state of Arizona is unsealed during a joint session of the House and Senate on Capitol Hill on Jan. 6, 2021. (Andrew Harnik/AP)

With the paperwork under renewed scrutiny this week, Arizona NBC affiliate KPNX asked Hoffman to sign from the Arizonas on Wednesday.

So in unprecedented times, unprecedented action is… there’s no case law, there’s no precedent as to whether or not an election that’s currently being challenged in court has the right standing , Hoffman said. That is why we felt it was appropriate to provide Congress and the Vice President with conflicting opinions.

A second group, identifying themselves as the sovereign citizens of the great state of Arizona, also sent a list of fake election votes to the National Archives, prompting a cease and desist letter from the Democratic Secretary of State’s office. Katie Hobbs for her use of the official seal of Arizona.

Arizona has been ground zero for election-related conspiracies, with a partisan audit of the vote in populous Maricopa County dividing Republicans in the state. At an October hearing in the U.S. House on the much-maligned Maricopa polling inquiry, Rep. Andy Biggs, R-Arizona, declined to say Biden had won the election.

The belief that Biden is not a legitimate president is now common among most Republicans, as a Yahoo News/YouGov poll released last week found that a large majority of Trump voters (75%) mistakenly believe that the election was rigged and stolen, with just 9 percent believing Biden won evenly compared to 13 percent last January.

Trump has endorsed candidates for high state office who have said the 2020 election is not legitimate, including former TV reporter Kari Lake for governor, who said she would not have certified the 2020 election results. He also lent his support to state legislator Mark Finchem who attended the Jan. 6 rally at the Capitol for the Arizona Secretary of State. Finchem has consistently pushed the idea that the election was stolen from Trump while supporting Maricopa’s audit.

The 2020 Maricopa County election cannot be allowed to run. It needs to be decertified and shelved, Finchem said at a Trump rally in Iowa in October.

Ward, Lake, Finchem and Biggs are all set to speak at Trump’s rally on Saturday.