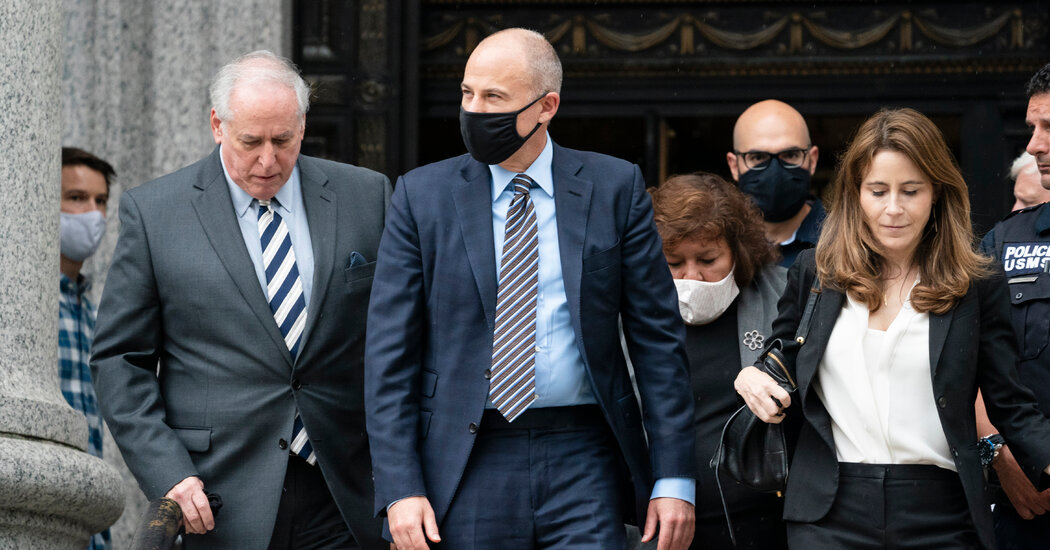 Mr Avenattis’ claims come just weeks before he faces trial in Manhattan in another criminal case, accused of stealing around $300,000 from Stormy Daniels, the actress, who was at the center of a scandal during Mr. Trump’s first presidential campaign. He pleaded not guilty to those charges.

Lawyers for Mr. Avenattis said he was seeking compensation under the federal tort claims law, a law that will allow him to sue the government if the claim is not settled within six months.

They treated him very differently from anyone else in prison, one of his lawyers, Zachary Margulis-Ohnuma, said Thursday. Once they took him into custody, they detained him in a unit for violent criminals and terrorists.

Mr Avenatti, 50, was arrested and jailed in January 2020 after prosecutors said he breached his bail conditions in a fraud case he was facing in California. Mr. Avenatti said in his statement that he was first held in solitary confinement in the Santa Ana Jail in Orange County, then taken to Manhattan and held at the now closed Metropolitan Correctional Center, a large part of this period in its most secure location. wing, 10 South.

Traditionally, 10 South was used to hold inmates charged with terrorism and other notorious crimes. Its most notable recent occupant was Joaqun Guzmn Loera, the Mexican drug lord known as El Chapo.

Take a man who has lived for decades without any criminal convictions, with no history of violence, Mr. Avenatti said in a telephone interview with one of his lawyers online, and within 72 hours put him in these conditions where he is housed in the most restrictive diabolical unit in all of the United States for inmates awaiting trial, is unprecedented.

Mr. Avenattis’ claim, a copy of which was provided to The New York Times by his lawyers, says that while he was in custody he spent approximately 94 days in solitary confinement or in a state of solitary confinement. For the vast majority of that time, I was in 10 South, he said in the interview.

Last July, when he was sentenced to two and a half years in the Nike case, Federal District Court Judge Paul G. Gardephe observed that Mr. Avenatti had been held in horrific conditions at the MCC for more than three months in solitary confinement. for most of the time and locked out for substantially all of it; first because a loaded handgun was smuggled into the facility by someone, and later because of the Covid-19 pandemic.

The conditions were terrible, the judge added. It’s hard to believe they could happen in the United States of America.

Many inquiries. Since former President Donald Trump left office, there have been numerous inquiries and investigations into his businesses and personal affairs. Here is a list of those in progress:

Tax evasion investigation. As part of their investigation, in July 2021, the Manhattan District Attorneys Office accused the Trump Organization and its chief financial officer of orchestrating a 15-year scheme to evade taxes. A trial in this case is scheduled for the summer of 2022.

Mr. Avenatti was released from prison at the end of April 2020 and has since been held under house arrest in California, said another of his lawyers, Daniel McGuinness.

Mr Avenatti said in the newspapers that while he was at MCC he was forbidden to speak with relatives or friends, he had no access to fresh air or recreation, the nighttime temperatures had been freezing and he had been allowed to see the sky only once.

When he asked for reading material, he said in his complaint, he was first refused and later given a book: Trump: The Art of the Deal.

Mr. Avenatti says in the statement that the month after his arrest, a senior prison worker escorted him for a legal visit to his cell and asked him if he understood why he was being housed at 10 South.

According to Mr. Avenattis, the employee explained that the orders came from Attorney General William P. Barr at the time.