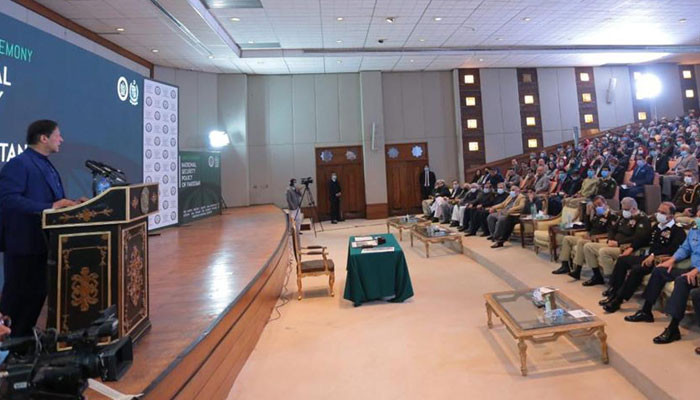 ISLAMABAD: Prime Minister Imran Khan said that whenever the country goes to the International Monetary Fund (IMF), it is obliged to accept its terms and conditions, and when it accepts its conditions to take out a loan, the security of the country is compromised.

He was addressing a function, held here Friday for the launch of the public version of the national security policy. He said that Pakistan had evolved under very precarious conditions, pointing out that the forces of other Muslim countries like Libya, Somalia, Syria, Afghanistan were not able to protect their respective countries from how our security forces have protected the country. in the war on terrorism.

However, he pointed out that there are many aspects of security and military security is one aspect of national security. If we focus on one aspect, we have the example of the Soviet Union where even the strongest forces in the world could not hold the Soviet Union together. We are trying to move our government, the people in one direction. If the economy is bad, you can’t protect yourself for long, he argued.

He argued that if you have to go to the IMF after a while, it means your security will be affected, because we never had the concept of common national security. He added that even in the economy there was never an understanding of how to protect themselves, the growth rate was increasing, the current account deficit was increasing which put pressure on the rupee and we had to go to the IMF.

The prime minister also said that whenever they go to the IMF they are forced because as a last resort there is only the IMF assistant left, who gives the cheapest loan. But to get an IMF loan, you have to agree to their terms, and when you agree to the terms, there’s a security trade-off somewhere; which doesn’t have to be the security forces, but it means you have to put the burden on your people and the greatest security is that the people stand by your side, he argued.

He continued that the concept of comprehensive growth in national security policy, that is, as long as we do not grow as a nation and only one section grows, that nation will always be insecure.

He emphasized that security comes when everyone understands that we are part of this nation; So, the first concept of inclusive growth came in the state of Madinah when it was decided that the state would take responsibility for every weaker section.

The Prime Minister said that the concept of Islamic welfare is present in most Scandinavian countries, in any case a state takes responsibility for its weakest class which then becomes a stakeholder and a real power to save this state .

He pointed out that when the forces came from Afghanistan to India, they met no resistance and that there was a direct battle on Panipat because there was a vadera system, that is, that which who sat at the top had all the power, the money, and the lower class had no role to play in the country, so their lives didn’t matter no matter who came.

In contrast, in the tribal areas, Afghanistan had a democratic system, the jirga system gave people justice and valued their freedom, so they resisted those who attacked them.

Prime Minister Imran said that the concept of inclusive growth is to protect the lives of weaker sections and to this end every family has been protected by providing health insurance which does not even exist in the developed countries of the world.

Earlier, the prime minister launched the public version of the first-ever national security policy document during a ceremony at the prime minister’s office. The launch ceremony brought together federal ministers, a national security adviser, parliamentarians, the chairman of the joint chiefs of staff, all heads of services, senior civilian and military officials, members of the academia, think tanks, media and civil society.

He explained that the National Security Policy 2022-2026 is centered on the government’s vision, which believes that Pakistan’s security is based on the security of its citizens. Any national security approach must prioritize national cohesion and the prosperity of people, while guaranteeing fundamental rights and social justice without discrimination.

To realize the vast potential of our citizens, it is necessary to promote good governance based on delivery, he said. The Prime Minister stressed that our armed forces are our pride and unite the nation. Given the threats we face in the region and the growing threat of hybrid warfare, they will continue to receive even greater support and importance.

The Prime Minister explained that the primary objective of our foreign policy and our military capacity will remain peace and stability in the region and beyond. Our foreign policy will also focus much more on economic diplomacy in the future.

He stressed that it was a document finalized after full civil-military consensus. The policy emphasizes a geo-economic vision to complement the focus on geo-strategy and stresses that the primary goal of Pakistan’s foreign policy and military capability was peace and stability in the region. and beyond, based on mutual respect and sovereign equality, APP reported.

The main themes of the NSP are national cohesion, securing the economic future, defense and territorial integrity, internal security, foreign policy in a changing world, peace with India with emphasis on the Kashmir solution and data cybersecurity.

The document emphasizes the non-negotiable focus on Pakistan’s defense and territorial integrity, enhancing space technology and its application, and countering hybrid warfare by improving information and cybersecurity.

With regard to internal security, the policy aims to ensure state authority throughout the country, zero tolerance towards terrorism, extremism and violent sub-nationalisms, and the fight against the threat of crime. organized.

A just and peaceful resolution of the Jammu and Kashmir conflict in accordance with UNSC resolutions has been declared a vital security interest in the country.