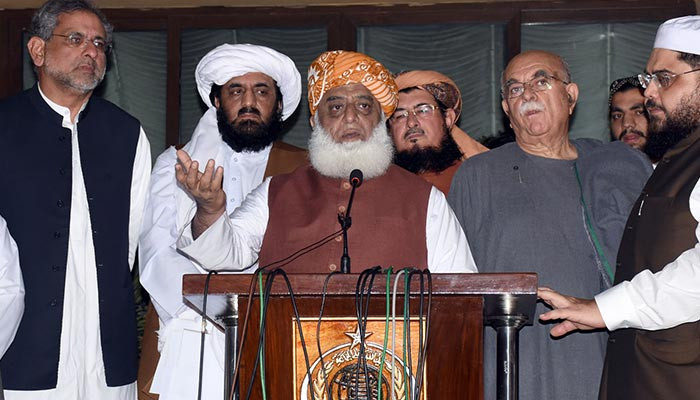 PDM leader Maulana Fazlur Rehman speaks during a press conference with Shahid Khaqan Abbasi, Mahmood Khan Achakzai and others after a meeting in Islamabad on October 17, 2021. Online/FileFazlur Rehman berates the government led by the Prime Minister Imran Khan on national security policy. being formulated, but “parliament does not know”. Prime Minister Imran Khan launched the public version of the NSP yesterday.

The JUI-F leader said his party had a massive following, lashing out at the government for giving the security policy the green light “without any consultation”.

“Politics is the only path to power,” the JUI-F leader said, adding, “Ulema must unite for the good of the people.”

This is not the first time that the opposition has criticized the government over the NSP. In December, there was a row in the upper house of parliament, as senators attacked the government for not bringing the NSP to the Senate.

“What kind of policy has parliament not had a chance to debate? Parliament hasn’t even seen this policy,” Senator Sherry Rehman said, chastising the government.

On December 27, 2021, the National Security Committee (NSC) approved Pakistan’s first-ever NSP 2022-2026, and a day later it also received approval from the federal cabinet.

“Go in the right direction”

Addressing the launch ceremony of the public version of the NSP in Islamabad yesterday, Prime Minister Imran Khan said the nation was now moving “in the right direction”.

The prime minister said national security was defined “in the right way” in the new policy because Pakistan has only ever had a one-dimensional thinking “we only need military security”.

The policy emphasizes a geo-economic vision to complement the focus on geo-strategy and stresses that the primary objective of Pakistan’s foreign policy and military capability is peace and stability in the region and in the beyond that, on the basis of mutual respect and sovereign equality, APP reported.

Our national security thinking seeks to identify ways to increase economic resources so that Pakistan can simultaneously strengthen its traditional and non-traditional security, said National Security Advisor to the Prime Minister, Dr. Moeed Yusuf , according to APP.