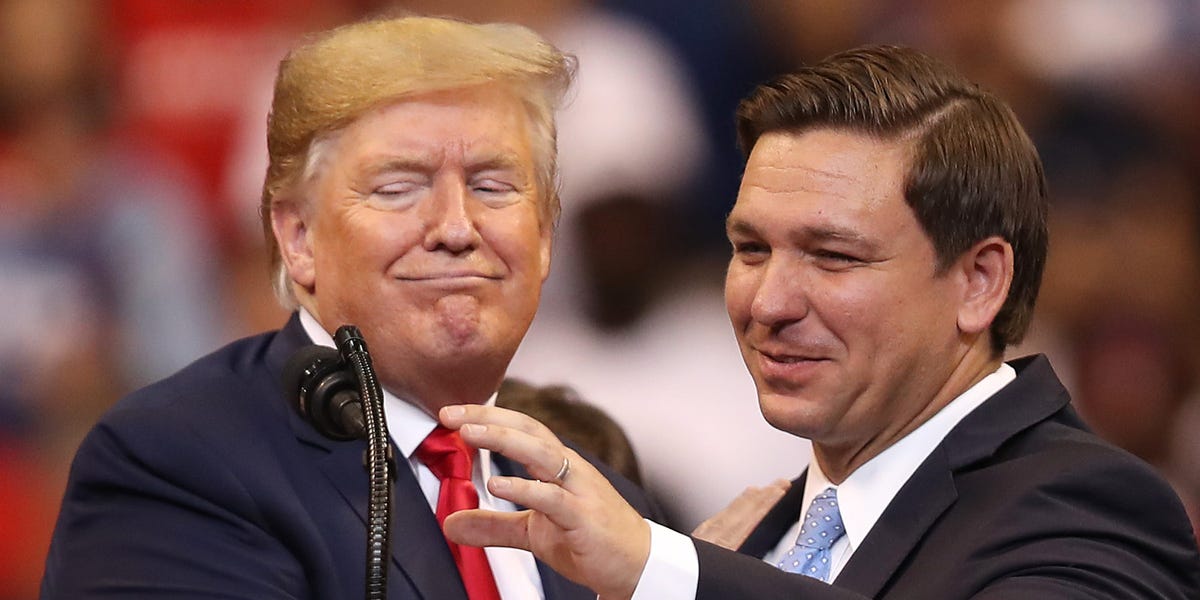 Trump spoke privately with Florida Governor Ron DeSantis, according to a report by Axios. Behind closed doors, Trump said DeSantis had a “dull personality.” According to Axios, Trump is also unhappy that DeSantis is not publicly ruling out running for president in 2024.

Former President Donald Trump spoke trash about Florida Governor Ron DeSantis behind closed doors, criticizing him for his perceived ingratitude and saying the governor had a “dull personality”.

According to sources who spoke to Axios’ Jonathan Swan, Trump has repeatedly criticized DeSantis in private.

“In the context of the 2024 election, he usually gives DeSantis a pop in the nose in the middle of this type of conversation,” said a source, who spoke to Swan on condition of anonymity. “He says DeSantis has no personal charisma and has a lackluster personality.”

The source also told Axios that Trump is going out of his way in those conversations to say he’s not worried about potentially having to take on DeSantis to land the GOP nomination in 2024.

A second unnamed source who spoke to Swan said Trump was angered by DeSantis because the latter had yet to publicly rule out a 2024 presidential election.

Axios reported that the former president also said privately that he didn’t understand what the “big deal” was for DeSantis to say he wouldn’t run in 2024, saying, “Why don’t you say- isn’t it just that he’s not going to run against me?”

The second source also told Swan that the former president was particularly annoyed by DeSantis’ perceived ingratitude, telling people privately that “there’s no way” DeSantis would have been elected governor without his approval.

According to Axios, Trump has been keeping tabs on who has ruled out running in 2024. Several prominent Republicans have not publicly ruled out running in 2024, including former Vice President Mike Pence, Texas Sen. Ted Cruz, who said in December that he would. running for president again “in the blink of an eye,” and former New Jersey Gov. Chris Christie, who in recent months has become a vocal critic of Trump’s fixation on voter fraud.

DeSantis is considered a top favorite to challenge Trump for the Republican presidential ticket. The insider’s Kimberly Leonard reported that DeSantis’ name kept coming up among Trump supporters gathered outside Mar-a-Lago on January 6, 2021, the one-year anniversary of the Capitol attack, with people picking the governor of Florida as the second favorite for the ticket.

DeSantis said in October that he was not considering running for president because he was “busy trying to make sure people weren’t supporting critical race theory.”

DeSantis also dismissed rumors that there was tension between him and Trump. However, on a conservative podcast this week, he admitted he wished he had been “much stronger” in his opposition to Trump when the former president issued COVID-19 stay-at-home orders.

Despite DeSantis’ criticism, Trump has signaled that he would be open to having the Florida governor as his vice-presidential running mate.

Trump has yet to announce a presidential race and said in November he would “probably” wait until after the midterm elections to confirm whether he would run for president in 2024.

Google wants to make it easy to send files.