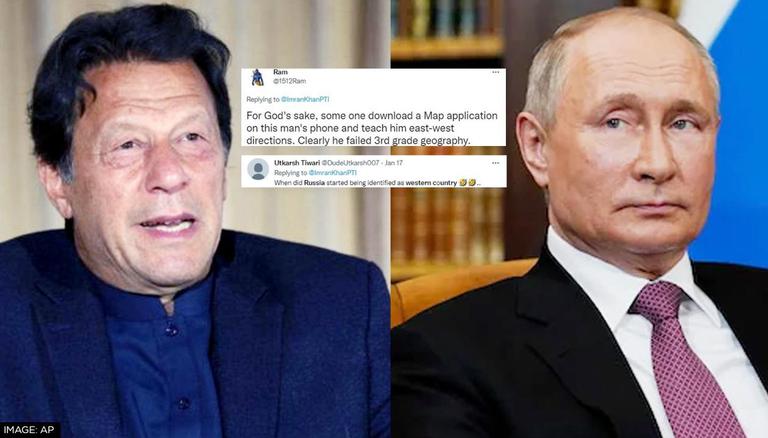 After his infamous remark about Germany sharing a border with Japan, Pakistani Prime Minister Imran Khan has again mixed up his geography after calling Russian President Vladimir Putin a “Western leader”. Taking to Twitter after a two-way phone exchange, Imran Khan appreciated Putin for his adamant statement that freedom of speech could not be a pretext to abuse the Prophet. Thanking him, Khan said Putin was the first “Western leader” to show empathy and sensitivity to Muslim sentiment.

I just spoke to President Putin primarily to express my appreciation for his categorical statement that freedom of speech cannot be a pretext to abuse our prophet PBUH. He is the first Western leader to show empathy and sensitivity to Muslim sentiment for their beloved Prophet PBUH

We also discussed ways to advance trade and other mutually beneficial cooperation between our two countries. We invited each other to visit our countries.

Several Internet users had the Pakistani Prime Minister checked and reminded him that Russia was not a Western country but a country straddling Eastern Europe and Northern Asia. Others mocked the Pakistani prime minister saying it reminded them of his “German-Japanese” statement.

In April 2019, while speaking at an event in Tehran, during his two-day official visit to Iran, Imran Khan claimed that Germany and Japan had killed thousands of civilians until after World War II, when the two decided to have joint industries on their borders. Internet users had then reminded him that it was in fact France and Germany which shared borders and had collaborated to lay the foundations of the European Union.

For God’s sake, someone downloads a Map app on this man’s phone and teaches him east-west directions. Obviously, he failed geography in 3rd grade.

If Germany and Japan can have a common border and Africa can be a country, then the Russian president can also be a “Western leader” for Prime Minister Imran Khan. pic.twitter.com/n66tn8NsdM

When did Russia start to be identified as a western country.. This is a next level joke by Imran sahab..

Imran, Not every light skin tone lives in the west Russia is not considered a western country unless Japan and Germany share a border

Imran Khan by calling President Putin a “Western leader” has once again made a fool of himself! https://t.co/4ahViNugrq

Russia is not in the West. He is not a Western leader simply because he is white. In fact, once Soviet was called the Eastern Bloc.

Notably, Imran Khan’s tweets came after Putin asserted that artistic freedom should not infringe on the freedom of others. Addressing an annual press conference, he stressed that Russia had become a “multi-ethnic and multi-confessional state” and said that insulting the Prophet Muhammad is a “violation of the sacred feelings of people who profess Islam”. Furthermore, he tried to justify the 2015 Charlie Hebdo shootings by saying that insulting the Prophet “could trigger other, even more, acute extremist manifestations” like the time journalists were shot in the offices of the Prophet. satirical newspaper in Paris.

Letter to Jokowi, Bill Gates Cs will meet in Bali in April 2022