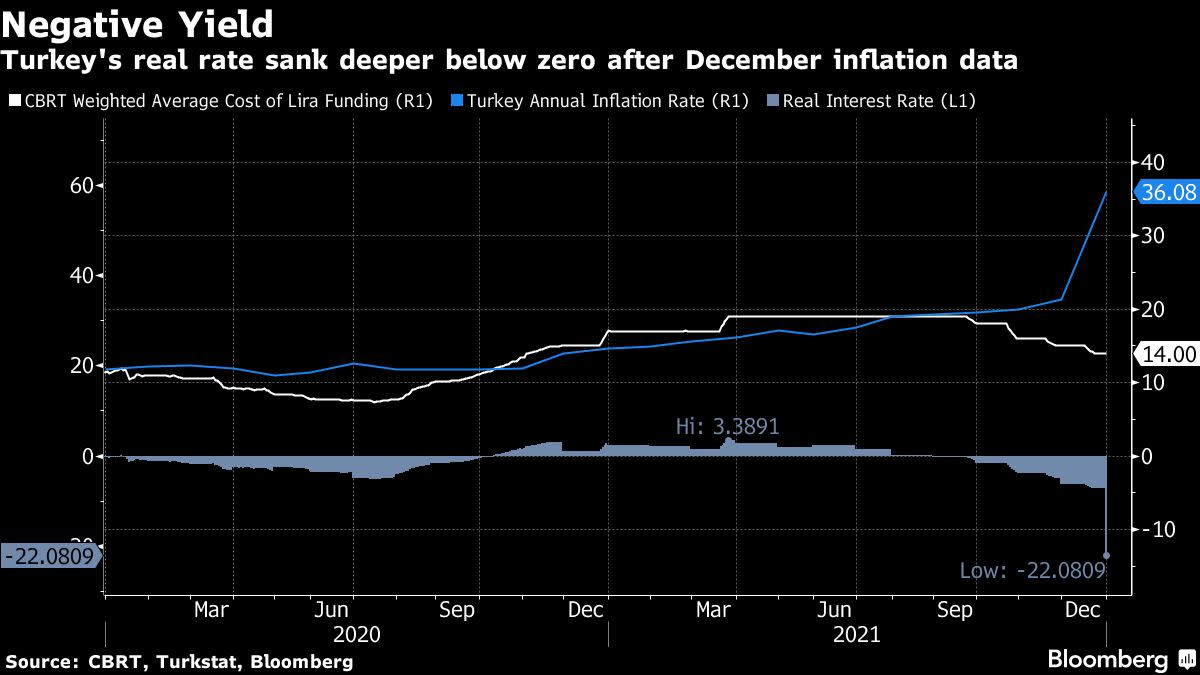 Turkey’s central bank kept its benchmark interest rate unchanged on Thursday, pausing a cycle of rate cuts and launching an indefinite policy review after inflation hit its highest level since the start of the 19-year reign. years of President Recep Tayyip Erdogan.

The monetary policy committee, led by Governor Sahap Kavcioglu, kept its one-week repo rate at 14%, as expected by 20 analysts polled by Bloomberg, in its first meeting since inflation hit a record high. 36.1%. The price spike has caused an uproar among Turks who have seen the value of their income plummet in the space of a few months.

As most emerging markets began to tighten monetary policy to avoid pressures on global prices, Turkey cut rates by 500 basis points in four consecutive meetings before Thursday, an aggressive easing cycle demanded by Erdogan’s high-stakes attempt to spur growth and reorient the economy toward manufacturing. and exports.

In Thursday’s statement, the central bank did not reinforce its December pledge to avoid rate cuts in the first quarter of 2022. It did, however, say it would conduct a comprehensive review of its policy framework to give priority to the Turkish lira, battered by rate cuts that pushed real yields deep into negative territory.

Market reaction to Thursday’s decision was muted, however, with investors welcoming the pause but complaining that Turkish monetary policy had become more tied to Erdogan’s political whims than official central bank directives.

After inflation jumped and the lira fell, a rational decision should have been to hike rates, said Piotr Matys, analyst at InTouch Capital Markets Ltd. Trying to decipher the overall message embedded in the statement seems like a pointless exercise because the market seems to listen more to what President Erdogan has to say on monetary policy than the central bank.

The lira was trading up 0.8% against the dollar at 13.3194 at 2:54 p.m. local time, after rising 1.2% on the heels of the decision. These moves were relatively limited compared to the sharp depreciation and wild swings the currency has seen in recent months.

According to economist Haluk Burumcekci, founder of Burumcekci Research and Consulting in Istanbul, the fact that the central bank has abandoned its earlier commitment to maintain the policy hold for the first quarter suggests that it could keep interest rates unchanged longer. long time. He described the new phase as an open, indefinite and mysterious review process.

Keeping rates unchanged could have posed risks for the governor, as Erdogan has fired three governors since 2019 amid disagreements over the direction of Turkey’s monetary policy. But the president softened his tone in recent comments, saying borrowing costs would gradually decline in 2022 and the lira would slowly strengthen.

Erdogan’s comments echoed those of Treasury and Finance Minister Nureddin Nebati, who told Bloomberg last week that policymakers would wait to see how the economy reacts in the first quarter to the latest wave of easing. . The central bank had signaled last year that the December rate cut would likely be the last in the current cycle.

Turkey’s currency lost up to half its value in three months before stabilizing after the government introduced emergency measures in December, including a program to compensate book holders in the event of a significant drop in the currency.

But the depreciation of the lira, combined with soaring global energy prices, has already translated into soaring prices and deteriorating prospects.

The inflation rate reached 36.1% in December. Inflation expectations for the next 12 months jumped to 25.37% from 21.39%, according to central banks’ January survey of market participants. Some Wall Street banks are predicting that last year’s currency crisis could push inflation past 50%, although Nebati says it will peak early and at a much lower rate.

Kavcioglu will update the banks’ baseline scenario for inflation through 2022 and the next two years on January 27. The central bank currently expects consumer price growth to end at 11.8% in 2022, according to its latest inflation report released in October.

The statistics agency will release January inflation data on February 3.

(Recasts with quotes from analysts in the fifth and seventh paragraphs)