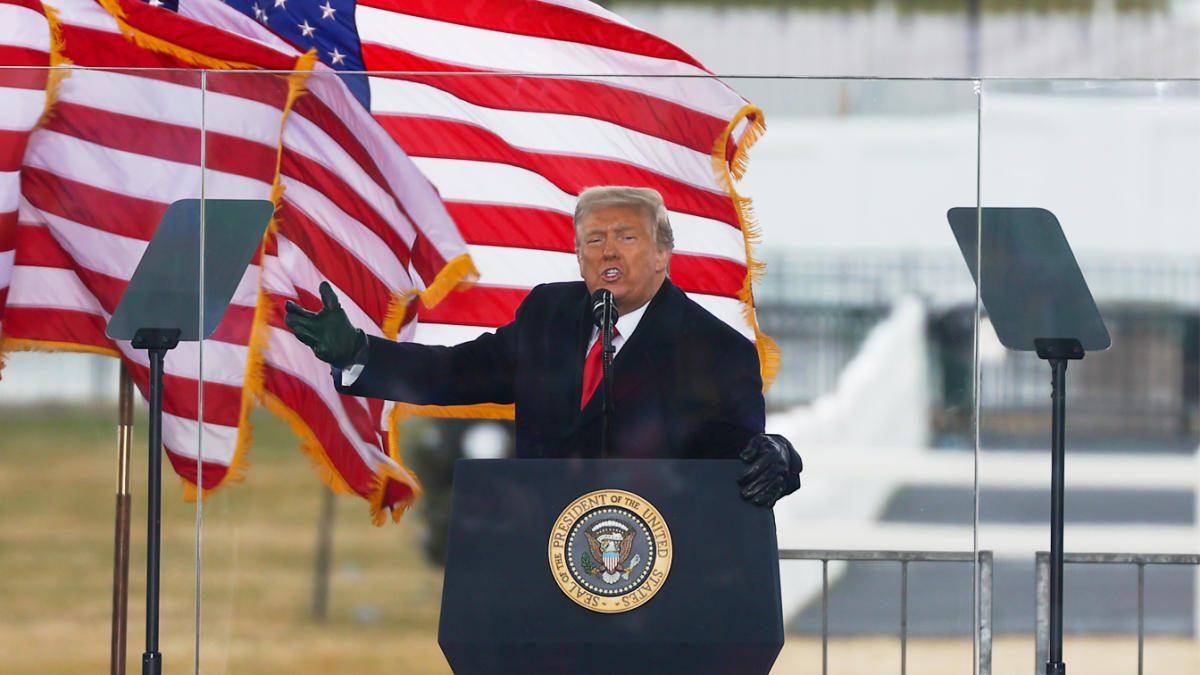 A Thursday letter from the congressional committee investigating the Jan. 6, 2021 Capitol uprising shed new light on the frenzied scene at the White House as supporters of then-President Donald Trump stormed Capitol.

In particular, the committee revealed that its investigation shows an approximately two-hour period in which White House staff, including Ivanka Trump, pleaded with the president to tell his supporters to go home, but did not couldn’t get it done.

Trump speaks at the “Save America March” rally in Washington on Jan. 6, 2021. (Tayfun Coskun/Anadolu Agency via Getty Images)

In fact, the letter that was sent to Ivanka Trump inviting her to speak with the committee indicates that some White House staffers believed that a live, unscripted appearance by the President in the press amid the violence of Capitol Hill could have made the situation worse. .

Ivanka Trump played a central role, according to the testimony of several Trump officials before the committee, in efforts to get her father to stop his supporters from rampaging in the Capitol. The ensuing riot delayed certification of the 2020 election.

Did you think she [Ivanka Trump] could help him get [President Trump] to a place where he would make a statement to try to stop this? committee staff asked Gen. Keith Kellogg, who was the vice president’s national security adviser but was also close to Trump and with him on Jan. 6 at the White House.

The committee asked Kellogg whether Trump had rejected calls from top staffers to try to stop the assault, including Kellogg, White House chief of staff Mark Meadows and press secretary Kayleigh McEnany and whether these staff members had then concluded that he could say yes to his daughter.

Kellogg said Ivanka Trump made several trips to the Oval Office to reason with her father. It came as many others were frantically trying to get the president to stop the chaos, which came after he called on his supporters to march on the Capitol.

Does anyone get to [Trump]? He must tell the protesters to dissipate. Someone is going to get killed, read a text from an anonymous person outside the White House to a White House staffer, according to documents obtained by the committee.

The White House staffer, also anonymous, replied: I’ve been trying for 30 minutes. Literally stormed into the outer oval to get him out first. This is completely crazy.

The first was an apparent reference to Trump’s first tweet in which he asked his supporters to be peaceful, but did not ask them to leave the Capitol. Please support our Capitol Police and our law enforcement agencies. They are really on the side of our country. Rest in peace!” Trump tweeted at 2:38 p.m.

A former Trump White House official previously told CNN that Trump didn’t want to include the words stay peaceful in his 2:38 tweet.

Protesters at the Capitol on Jan. 6, 2021. (Kent Nishimura/Los Angeles Times via Getty Images)

Earlier, Trump cheered up the crowd with a tweet accusing Vice President Mike Pence of refusing to overturn the election results in an effort to throw out a Democratic election and return the presidency to Trump. Mike Pence didn’t have the guts to do what should have been done, Trump tweeted at 2:24 p.m.

It wasn’t until 4:17 p.m. that Trump released a video in which he told his supporters to go home, even as he continued to falsely claim that the election had been stolen from us.

And the letter sent Thursday to Ivanka Trump indicates that the select committee understands that several takes of the video were filmed but not used. Information in the possession of the special committees suggests that the president failed in the initial clips to ask the rioters to leave the Capitol.

The committee said unused videos are archived at the National Archives and it is seeking access to them.

It represents a two-hour period in which Trump watched the riot on television, refusing pleas from his closest staff and his daughter to tell his supporters to go home. The committee asked Ivanka Trump to testify voluntarily and has so far refused to issue a subpoena.

The committee also said it wanted to speak to Ivanka Trump to find out if her father had already taken steps to order the National Guard or law enforcement to the Capitol to stop the riot.

The Committee has identified no evidence that President Trump issued an order or took any other action to deploy the guard that day. Nor does it appear that President Trump called the Justice Department or any other law enforcement agency to request the deployment of his staff to the Capitol, the letter said.

The letter comes a day after the Supreme Court ruled 8-1 on Wednesday that the National Archives could turn over documents requested by the committee, denying a request by Trump’s attorneys to withhold the documents under executive privilege.

And on Thursday, the Fulton County prosecutor in Georgia requested the formation of a special grand jury to help him investigate Trump’s efforts to nullify the state’s election results.

It is not yet clear whether James, a Democrat, will file a civil lawsuit against Trump. It does not carry out a criminal investigation.

Rioters approached within two doors of Vice President Mike Pence’s office. Find out how in this 3D explainer from Yahoo Immersive.

Pakistan tops Economist’s global recovery report, but not all citizens are convinced