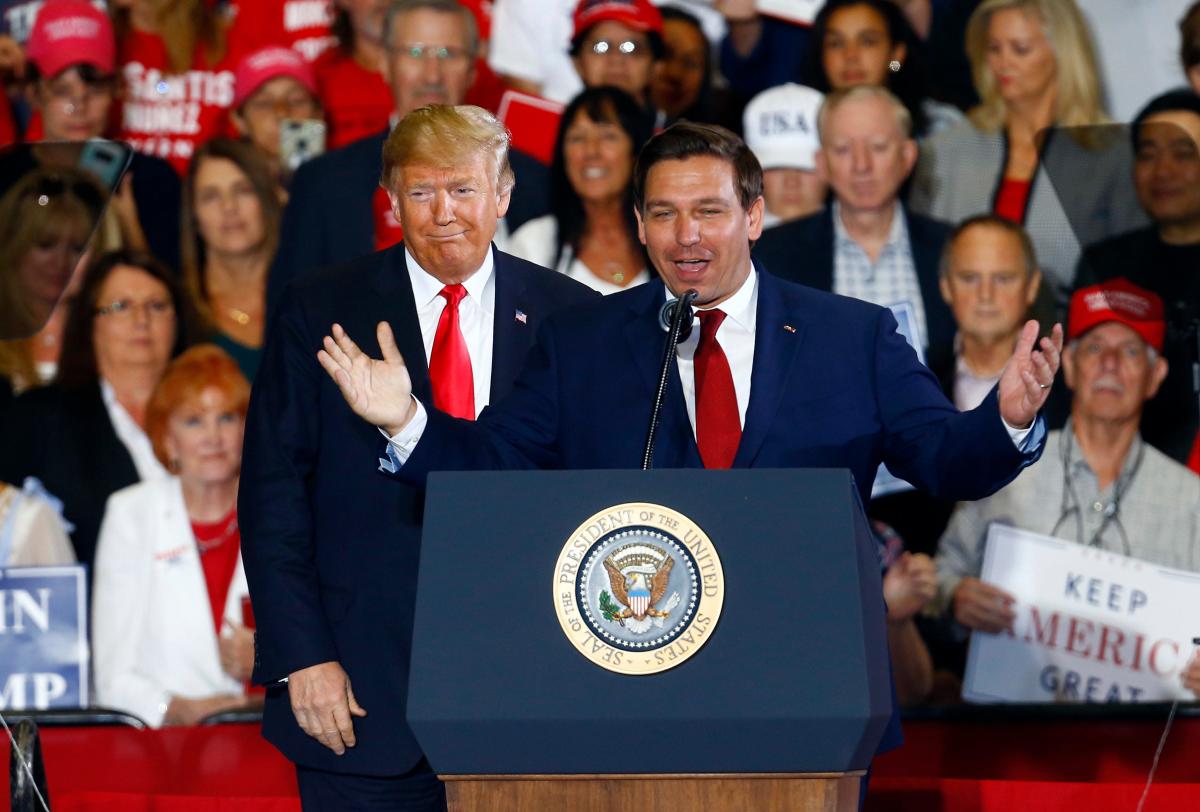 WASHINGTON The Republican Party’s favorite political rivalry is simmering again… and potentially heading to a boil as 2024 approaches: Donald Trump and Ron DeSantis.

The former president and some of his allies have been taking shots at the Florida governor, a one-time Trump protege whom many now view as a potentially formidable rival for the 2024 Republican presidential nomination.

DeSantis and aides play down any friction with his famous Florida-based constituent and say the governor’s focus is on his 2022 re-election bid later this year.

While Republican presidential primaries are still three years away, Trump easily leads very early polls of potential GOP voters; DeSantis is second in several surveys. But the friction between the two men suggests Republicans could find themselves someday deciding if Donald Trump is indeed the leader of the GOP – or if DeSantis is.

While associates of the two men said there’s always going to be some friction between two such ambitious politicians, Trump and DeSantis sought to end their latest kerfuffle by saying it’s all media hype.

“I have a very good relationship with Ron, and intend to have it for a long time,” Trump told Fox News host Sean Hannity on Thursday.

More: Ron DeSantis might already be running for president. Donald Trump could help and hurt his plans

More: Will any Republicans challenge Trump in 2024? DeSantis, Pence and the other top contenders to know

DeSantis who told a recent interviewer that “this is what the media does” feels the same way about Trump, aides said.

“Governor DeSantis has always said that media narratives cannot get in the way of their friendship,” said spokeswoman Christina Pushaw.

President Donald Trump stands behind Ron DeSantis, Candidate for Governor of Florida, as he speaks at a rally, Saturday, Nov. 3, 2018, in Pensacola, Fla.

Associates of the two men, speaking on condition of anonymity to discuss private matters, said there have been tensions, but they’re that not that big a deal.

After all, they said, Trump and DeSantis aren’t running against each other for president at least not yet.

In an interview on the OAN network, Trump who disclosed his own booster shot late last year made an obvious reference to DeSantis: “I watched a couple of politicians be interviewed and one of the questions was, ‘Did you get the booster?’ Because they had the vaccine and they’re answering it, like in other words, the answer is ‘yes’ but they don’t want to say it, because they’re gutless.”

DeSantis has refused to discuss his vaccination status, calling in a “private matter.” He said Friday that “I’m not going to let that be a weapon for people to be able to use.”

For his part, DeSantis recently made what Trump aides regarded as a criticism by saying on a podcast that he wishes he would have been “much louder” in objecting to the Trump administration’s plans to lock down the economy in the early days of the COVID- 19 pandemic. (DeSantis did not name Trump during the podcast and was more critical of government officials like Dr. Anthony Fauci.)

“I never thought in February, early March, that (the virus) would lead to locking down the country, DeSantis said on the conservative podcast Ruthless.” “I just didnt. I didnt think that was on the radar.

This isn’t the first time Trump and DeSantis have gone back and forth.

The prospect of a Trump-DeSantis presidential battle has been brewing for a while now. DeSantis began generating presidential buzz as far back as February of last year, after delivering a rousing speech at a Conservative Political Action Conference in Orlando. DeSantis assailed the “failed Republican establishment” of the pre-Trump past and did well in straw polls sponsored by CPAC.

Tension flared after Trump declined to cancel a political rally in Florida just days after a condominium collapse in Surfside, Fla., on June 24 that killed nearly 100 people.

In recent months, Trump has often expressed frustration with DeSantis’s apparent ambition and believes the governor lacks gratitude, said close Trump advisers who asked not to be identified because of the sensitivity of conversations regarding the former president. Back in 2018, Trump’s endorsement of the then-little-known congressman propelled him to victory in a Republican gubernatorial primary and eventually the governor’s mansion.

At times, advisers said, Trump has wondered why DeSantis hasn’t said publicly he will not seek the presidency if Trump does.

For their part, DeSantis and his allies say it’s too early to talk about 2024; he and the Republican Party have to get through 2022 first.

Expect more of this kind of thing.

The reason? Many Republicans who dislike Trump and many who love him see DeSantis as the strongest potential opponent for the former president in the 2024 race. As such, the Florida governor’s performance and comments about Trump and Republican leadership in general are being closely monitored.

First things first, however: If DeSantis loses re-election as governor in November, any presidential ambitions will end.

Competition among the Republicans nationally at this point is a relative term: Trump currently enjoys huge leads among the party faithful.

According to a Reuters/Ipsos poll conducted last month, 54% of Republicans picked Trump as the nominee; DeSantis was the only other potential candidate in double digits 11%.

Many political professionals are keeping an eye on the Trump-DeSantis relationship, seeing the latter as the biggest potential threat to Trump’s comeback bid.

Trump opponents are playing up the alleged feud as a way to annoy the former president.

More: DeSantis pooh-poohs it, but Lincoln Project stokes talk of rift with Trump

The Lincoln Project, an anti-Trump organization, is re-playing a television ad in Florida taunting Trump over the rising status of a potential rival he made governor.

“Now he’s the next big thing,” the ad narrator said in describing DeSantis, as if speaking to Trump. “He’s making it his Republican Party. Everyone says he’s better than you. Bigger than you. Smarter than you. Thinner than you.”

Aides said Trump in no way fears DeSantis as a political opponent and is confident he can defeat any Republican who challenges him in the GOP primaries.

If I faced him, I’d beat him like I would beat everyone else, Trump told Yahoo Finance Live.

Trump opponents said he is using news reports about DeSantis to re-assert his continuing dominance of the Republican Party.

“It means that Trump is the mainstream of the GOP until he’s not,” said Reed Galen, co-founder of the Lincoln Project. “His influence is greater now than when he was in office.”

As such, some Republicans wonder if DeSantis would challenge Trump for the Republican presidential nomination, should the opportunity arise.

Others say DeSantis assuming he wins re-election as governor of Florida is in a unique position to challenge Trump.

Liz Mair, an anti-Trump Republican strategist, said the Florida governor would have a good chance because “Trump is becoming old news and DeSantis is more in line with where the base is right now.”

She added: “The key is how DeSantis responds to Trumps usual attack-y nonsense.”

This article originally appeared on USA TODAY: Donald Trump and Ron DeSantis eye each other warily before 2024 race