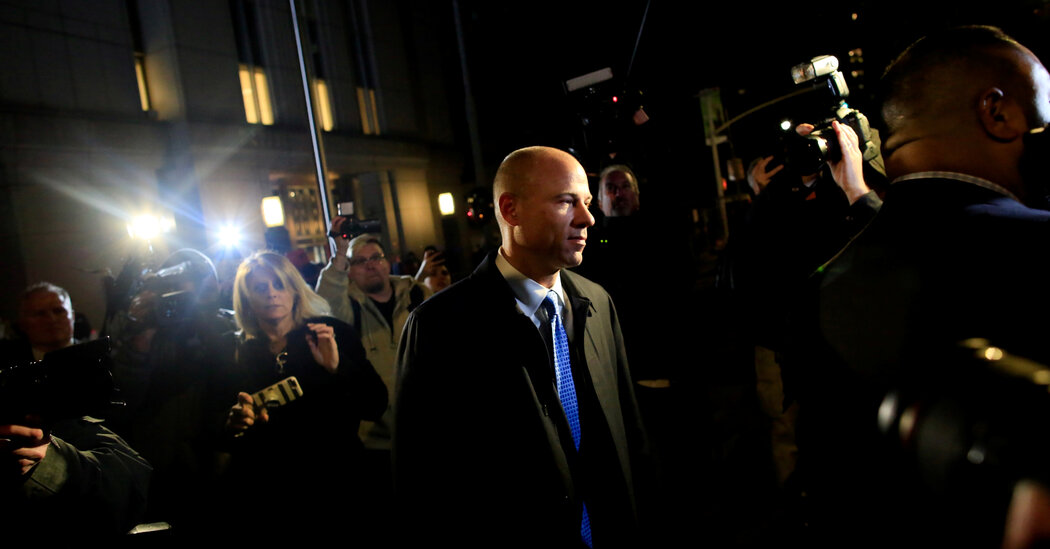 They became stars of what has often been called the resistance and were seen by some as potential agents of Mr. Trump’s downfall. For a time, the hot-headed Mr Avenatti even flirted with a race to replace Mr Trump.

But the partnership between Ms Daniels, whose legal name is Stephanie Clifford, and the lawyer fell apart long before the 2020 election. And even as he defended Ms Daniels in public, Mr Avenatti secretly robbed her, according to Manhattan federal prosecutors.

In 2019, already facing unrelated fraud charges, he was charged with wire fraud and aggravated impersonation. Prosecutors said after helping Ms. Daniels secure a book deal, Mr. Avenatti impersonated his client in a letter and asked his literary agent to send him nearly $300,000 in book payments. publishers intended for him.

On Monday, long after Mr Avenatti went from fame to infamy and nearly two years after he was found guilty of trying to extort millions from Nike, he appeared in court again as a ‘accused this time accused of taking advantage of the client who helped him do it, however briefly, a household name.

In an opening statement on Monday morning, a prosecutor told a jury in Manhattan Federal District Court that there was no agreement for the defendant to get some of the book money from Ms Daniels and said added that the case against Mr. Avenatti was clear.

This is a case about a lawyer who robbed his client, prosecutor Andrew Rohrbach said. A lawyer who lied to cover up his scheme.

Minutes later, a defense lawyer, Andrew Dalack, described Ms Daniels as a disgruntled former client in a fee dispute with Mr Avenatti. He added that Mr Avenatti loaned Ms Daniels hundreds of thousands of dollars of his own money for security arrangements, to buy a car and to obtain possible blackmail material and that he was also party to a deal that he was entitled to a reasonable percentage to be agreed upon from the proceeds of his book.

Ms Daniels is widely expected to appear as a government witness, and in a letter to the court last month, lawyers for Mr Avenattis wrote that there was a good chance he would testify for his own defence.

This would subject him to cross-examination by a prosecutor, a risk few defendants are willing to take. But Mr. Avenatti has a history of betting professionally, most of it underpinned by an uncommon confidence in his own abilities.

Early in his career, Mr. Avenatti quit a job at a Los Angeles-based white shoe defense firm and joined a small company that used to win big settlements but also took on the type of business that could pay off soon after. years of expensive work.

Eventually, Mr. Avenatti founded his own company. He was best known in California, with a reputation as a fierce advocate for his clients and a history of sometimes fighting with his colleagues.

In early 2018, Mr Avenatti filed a lawsuit in Los Angeles on behalf of Ms Daniels, who said she had sex with Mr Trump more than a decade earlier and received payment of $130,000 shortly before the 2016 presidential election. to keep quiet about it.

The lawsuit claimed that a nondisclosure agreement that accompanied the payment was invalid because Mr. Trump had not signed it.

Mr Avenatti accused the president and his lawyer of trying to intimidate, threaten and silence Ms Daniels and defended his honor, telling 60 Minutes he believed there was no doubt that when the American people would take all the facts and evidence into consideration, that they will conclude that this woman is telling the truth.

And Ms Daniels has praised Mr Avenatti and his style of litigation, with his frequent television appearances and colorful, combative statements.

Every time I watch him work, I think that’s what it must have been like to see the Sistine Chapel being painted, Ms Daniels said in an interview with The New York Times Magazine. But instead of painting, Michael uses the tears of his enemies.

Just weeks after the remarks were published, Mr. Avenatti was taking steps to bamboozle Ms. Daniels and her literary agent, according to prosecutors.

In the spring of 2018, according to prosecutors, Ms Daniels entered into a contract with a publisher to write a book, with an advance of $800,000 to be paid in four installments.

Many inquiries. Since former President Donald Trump left office, there have been numerous inquiries and investigations into his businesses and personal affairs. Here is a list of those in progress:

Tax evasion investigation. As part of their investigation, in July 2021, the Manhattan District Attorneys Office accused the Trump Organization and its chief financial officer of orchestrating a 15-year scheme to evade taxes. A trial in this case is scheduled for the summer of 2022.

Months later, according to an indictment, Mr Avenatti sent a literary agent working with Ms Daniels a letter claiming to be from her and directed future payments to a new bank account. Ms. Daniels was unaware of the account, which Mr. Avenatti controlled, according to the indictment.

Soon, the agent sent $297,500 from Ms. Daniels of her second and third publisher payments minus her agencies share to Mr. Avenattis’ account, according to the indictment, adding that Mr. Avenatti used this money to pay the employees of his law firm; cover airfare, restaurant, hotel and dry cleaning bills; and making a monthly lease payment of around $3,900 for a Ferrari.

When Ms Daniels did not receive the expected payments, she turned to Mr Avenatti, asking for his help in obtaining money from the publisher, according to the indictment.

Although Mr. Avenatti ended up transferring an amount equal to the second installment to her, the third installment came into her account, prosecutors said. Ms Daniels received none of that money, according to the indictment.

And, the indictment adds, Mr Avenatti responded with lies when Ms Daniels continued to ask for his help. Finally, in early 2019, Ms. Daniels contacted a representative of the publisher and received from her agent a copy of the forged letter that Mr. Avenatti is accused of sending. Three months later, he is indicted.

At that time, Mr. Avenatti was also arrested for trying to extort more than $20 million from Nike in exchange for evidence he had of company employee misconduct in recruiting basketball players. academics. He was found guilty in this case and sentenced last summer to two and a half years in prison.

A month later, he won a mistrial in another federal case in which he was accused of stealing millions of dollars from five clients and lying about his business and earnings. A judge ruled that prosecutors hid from the defense what Mr. Avenatti considered exculpatory financial data that investigators had collected.

Mr. Avenatti’s defense in the fraud and impersonation case could rely heavily on claims that he was entitled to the proceeds of Ms. Daniels’ book deal, as stated by the one of his recent court documents.

The filing also suggested Mr. Avenatti may question the veracity of his former client, whom he once publicly hailed as a teller of the truth.

The defense intends to present arguments at trial regarding Ms Clifford’s written contract with Mr Avenatti, defense attorneys wrote. This speaks directly to the credibility of Ms. Cliffords’ accusations.