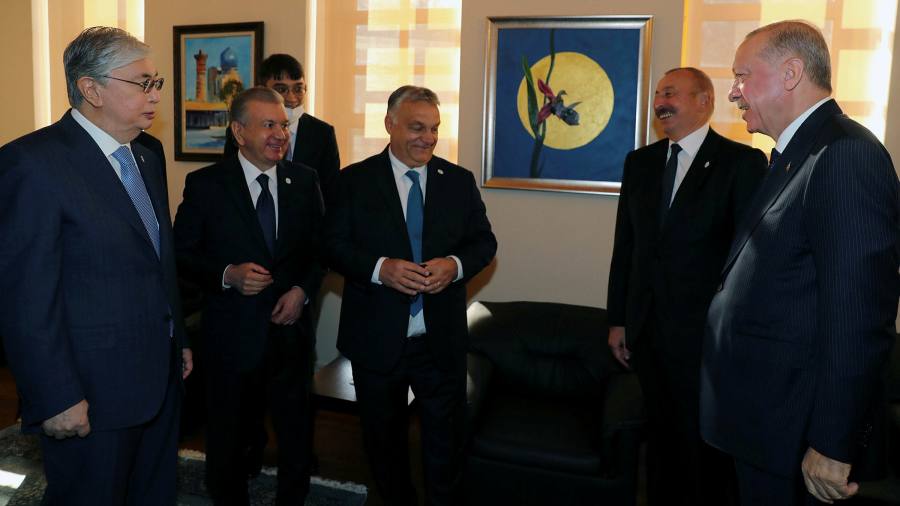 In November, Turkey’s president Recep Tayyip Erdogan received a gift to mark his taking over the helm of the Organization of Turkic States. The large, gold-framed map of “the Turkic world”, depicting communities of ethnic Turks across Europe and Asia, spoke to a deeply rooted nationalist vision of pan-Turkic unity.

But the decision by Kazakhstan’s president Kassym-Jomart Tokayev to ask Vladimir Putin for help in suppressing protests that rocked his country has dealt a blow to Erdogan’s dreams of forming a bloc made up of Turkey and “brotherly” nations in the former Soviet Union.

“The fact that Tokayev called Russia and Putin and not Turkey and Erdogan is proof that the big boss [in the region] is still Russia,” said Bayram Balci, director of the French Institute for Anatolian Studies in Istanbul.

Putin, he said, had proved that he “can come in and save the regime”, adding: “This is something that Turkey cannot do for its allies in Central Asia.”

The idea of ​​brotherhood among Turks from the Balkans to China has cultural resonance in parts of Turkish society, speaking to the legend that Turkey’s modern-day population is descended from nomads from Central Asia.

Resurrection: Ertugrul, a hit TV series launched by the state broadcaster in 2014, captured millions of viewers with its epic depictions of the Turkic warrior hero who lived a romantic nomadic existence and went on to found the Ottoman Empire. The rightwing opposition IYI party takes its name and logo from Ertugrul’s Kayi tribe.

Erdogan himself is better known as an admirer of the Ottomans. But he has taken to drawing on Turkic imagery and symbolism in recent years as he has wooed nationalist voters and allied with the rightwing Nationalist Movement party.

Efforts to build co-operation between Turkic states predate the current president, starting in 1991 after the collapse of the Soviet Union. Turkey was the first country to recognize many of the newly independent states. The Turkish international development agency, TIKA, was founded in 1992 in order to send aid to the fledgling nations.

The push to build ties gathered pace in 2009 with the founding of the Turkic Council, which was driven by Turkey and Kazakhstan’s now sidelined former president Nursultan Nazarbayev.

Halil Akinci, the group’s founding secretary-general, said that rather than “drinking raki or vodka and sitting around singing circindir karadeniz” — a Turkish nationalist song — “we started to think of more useful and beneficial co-operation.”

Akinci said that Ankara never had any intention of “ruling over or uniting” Turkic states, but rather wanted to promote economic, educational and cultural co-operation.

In addition to building influence across the Balkans, the Arab world and Africa over the past decade, Turkey has significantly increased trade with Central Asia.

Yet compared with the influence of China and Russia in the region, Ankara’s role remains “largely insignificant”, said Alp Coker, head of the Turkey desk at the London-based consultancy GPW. “Turkey never really established any military, political or economic influence to a meaningful extent,” he said.

The exception, Coker said, was Azerbaijan, where Turkey is not only a key partner on energy and trade but also helped Baku to win a surprise victory in a war with Armenia in the disputed region of Nagorno-Karabakh in 2020.

That success, along with the upheaval in Kazakhstan, has spurred suggestions from some senior former Turkish military officers that the Turkic Council should have a military dimension.

That would raise eyebrows in Moscow, where Ankara’s jostle for influence in parts of the former Soviet Union is part of a complex relationship of co-operation and competition with Russia that extends to Libya, Syria and Ukraine.

Asked to respond to the Turkic world map that Erdogan was given last year, the response of Putin’s spokesman, Dmitry Peskov, was pointed.

“Our Turkish partners are cherishing the idea of ​​Turkic unity, and it is normal,” said Peskov, a fluent Turkish speaker. “But the only thing I regret is that this map doesn’t have a big red star in the center of the Turkic world.” Such a star, he added, should be marked on the Altai Republic, the legendary home of the Turkic race. It is a part of modern-day Siberia.

Tennis Australia reverse ban on Where is Peng Shuai? shirts