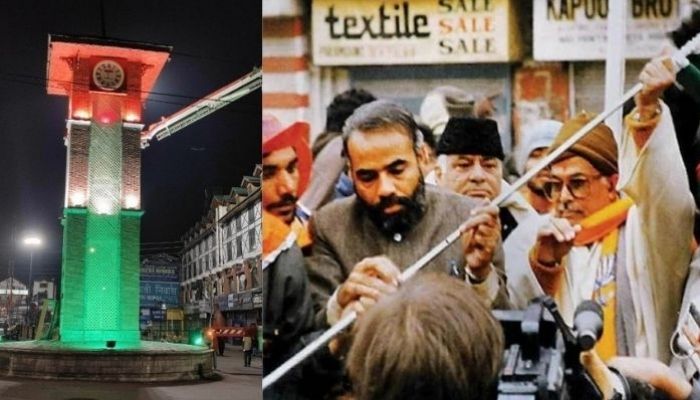 As India celebrates its 73rd Republic Day on 26th January 2022, an old speech PM Narendra Modi has gone viral on social media. This speech was given on 24th January 1992 somewhere in Kashmir when Narendra Modi was on his way to Srinagar’s Lal Chowk to unfurl the Indian flag Tricolor as a part of the BJP’s Ekta Yatra under the leadership of Dr Mulrli Manohar Joshi.

In the video, Modi could be heard saying, “Terrorists have challenged that one who is a real son of his mother should try and dare to unfurl the Indian flag Tricolor at the Lal Chowk of Srinagar. We will see if he manages to go back alive. I want to tell them, it is just a matter of a few hours for 26th January. Who is the real son of his mother, will be decided in the Lal Chowk of Srinagar on 26th January.”

After this, he is seen with Dr Murli Manohar Joshi and other BJP workers waving the Tricolor at Lal Chowk. It is notable that after Modi became the Prime Minister, articles 370 and 35A were revoked in his second tenure and Lal Chowk was decorated with the lightings of three colors of the Indian flag. Modi has proved himself to be a man of his words.

After the phenomenal success of Ram Rath Yatra led by LK Adwani, BJP had come up with Ekta Yatra in 1992. Kashmir had then become home to Islamic terrorists and Kashmiri Pandits were compelled to leave their homes on 19th January 1990. Those who resisted were killed . Terrorists were openly threatening the Indian republic that they will draw out Kashmir from India on the basis of religion. Insulting the national symbols of India was one of the acts terrorists would repeatedly use to mock the largest democratic nation day in and day out. It was at this time that the BJP organized the Ekta Yatra from Kanyakumari to Kashmir. Waving the Indian flag at the Lal Chowk in Srinagar was to be the conclusive point of this yatra. Modi was one of the key organizers of this yatra led by Dr Murli Manohar Joshi.

Years after when Narendra Modi was serving as the chief minister of Gujrat, he had recalled this incident in one of his speeches. In this speech he had said “I remember, I had gone to Lal Chowk in Srinagar in 1992 to wave the national flag. In those days, terrorism there was at its peak. Terrorists used to insult our national flag Tricolour. They would trample the flag under their feet. They would burn the flag. Some of them would even clean their cars and shoes with the flag and they were doing this all on camera. This scene would put my heart on fire. We had then been on a yatra. We had taken the Tricolor in our hands and we started our march from Kanyakumari. And we had decided that we will go to the Lal Chowk of Srinagar and wave our national flag there. Friends, to go into the very hearts of the area which had become the strong fortress of the terrorists who insult our national flag, and to wave our flag there, how do you think of it?”

Explaining how did it all bring a change within him, Modi had further said, “Friends, we left from Kanyakumari. When we started our yatra at that time in Srinagar, terrorists had written on the walls that ‘we will see who is the real son of his mother, who is daring enough to wave the Indian flag at Lal Chowk of Srinagar and go back alive. Starting from Kanyakumari when I reached Hyderabad, at that time I received a few new paper cuttings in which all those posters etc were shown. From Hyderabad onwards, I changed my speech. There was a natural change in the way I used to talk in that yatra so far. A voice came from within. I challenged them back from the public meeting in Hyderabad. It was exactly one month before Republic Day when we were supposed to reach Lal Chowk of Srinagar. At that time I had said in the public meeting and you may watch it if any video clipping of that Ekta Yatra is available.”

‘I waved the flag at Lal Chowk of Srinagar, in defiance of threat issued by terrorists’: Modi

Reiterating his old talk in Hyderabad, Modi is seen in this video saying further “I had said in the public meeting in Hyderabad that those terrorists have challenged me by saying that who is daring enough to wave the Indian flag at Lal Chowk of Srinagar and go back alive. I had further said in the public meeting that I will reach Lal Chowk of Srinagar on 26th January at 11 AM sharp. I will not wear any bulletproof jacket. I will not board any bulletproof vehicle. I will have nothing in my hands except the Tricolour. And on 26th January at 11 AM, it will be decided at Lal Chowk of Srinagar who is daring enough and who is the real son of his mother. Friends, I went there on time. I waved the flag and today I am here right in front of you.”

After describing this incident, The then CM of Gujrat, Narendra Modi is seen in this video saying “It is not just now that I am fighting with these terrorists. This has been a long battle.” The Ekta Yatra was attacked by terrorists when it reached Kashmir. Just before the completion of the BJP’s Ekta Yatra, the terrorists blew a grenade at the police headquarters, in which the then Director General of Police JN Saxena was injured. Sensing the situation, the then administration had airlifted some senior BJP leaders including Murli Manohar Joshi, Narendra Modi to Srinagar. Murli Manohar Joshi, Narendra Modi and others involved as a member of his team hoisted the tricolour. They waved the flag for not less than fifteen minutes. During this, the terrorists also fired rockets that did not hit the target. After this, all the leaders and workers had returned safely.

Lal Chowk of Srinagar has been like never before in the recent past especially after revoking thew articles 370 and 35a. Last year, lightings were set up at Lal Chowk on the occasion of Independence Day. It was followed by the Krishna Janmashtami celebration at Lal Chowk.