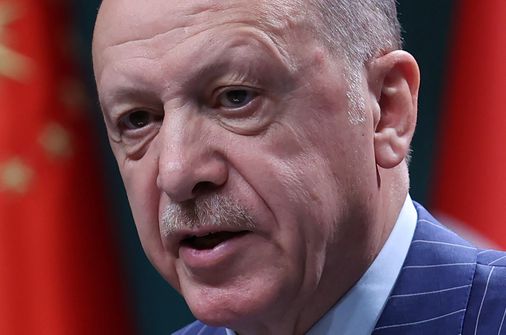 We are following developments with Sweden and Finland, but we don’t have favorable views, Erdogan told reporters on Friday.

While he refrained from announcing a veto on any potential membership bid, the Turkish leader accused the Nordic countries of harboring terrorist organizations, referring to groups such as the Kurdistan Workers’ Party , or PKK. The group is banned in Turkey and classified as a terrorist organization by that country, the United States and the European Union. But Sweden tolerated it for a long time.

The dispute has shown that there are limits to NATO’s solidarity in the face of the conflict in Ukraine, after nearly three months of fighting. Many NATO countries have funneled arms and other aid to Ukraine, and there is broad consensus that the alliance needs to strengthen its defenses against the Kremlin. But as talks continue over how to boost NATO’s presence in Eastern Europe, there are divisions over exactly how to respond.

Erdogan’s skepticism was a change from previous discussions in NATO about the potential candidacy of Helsinki and Stockholm, in which there was unanimous agreement, even informally, that the 30 existing members would welcome two more. Erdogan faces presidential and parliamentary elections no later than June 2023, and his acerbic stance was likely to be aimed at least in part at his domestic audience, which has often rewarded a caustic attitude toward the Kurdish minority.

But it would also strain relations with Washington at a time when they have warmed due to Turkish support for Ukraine during the conflict. It could also increase tensions with other NATO countries.

The United States is seeking to clarify Turkey’s position, Karen Donfried, assistant secretary of state for European and Eurasian affairs, told reporters. It is not clear to me that Turkey is saying that it will oppose Sweden’s candidacy.

The remarks come as Secretary of State Antony Blinken prepares to travel to Germany on Saturday for a meeting of NATO foreign ministers that will include top diplomats from Finland, Sweden and Turkey.

It will certainly be a conversation that will continue over the weekend, said Donfried.

The Biden administration has said it supports the potential candidacy of Finland and Sweden and will work to secure support within the alliance assuming the two countries formally apply.

If Turkey can be conquered, NATO leaders are expected to formally endorse the bid at their June summit. Then the national legislatures must ratify it. The entire process could take six months to a year, officials said. Hungary, which is led by a Kremlin-friendly prime minister, Viktor Orban, may also be a question mark, despite accepting previous rounds of NATO expansion.

Sweden’s NATO membership would raise the threshold for military conflict and thus have a conflict-preventing effect in northern Europe, Linde told reporters about a report on membership that was sent to the parliament. Military non-alignment has served us well, but now we are in a new situation.

Sweden also released a parliamentary report on Friday saying NATO membership would raise the threshold for military conflict and thus have a deterrent effect in northern Europe.

The document, titled Deteriorating security environment – ​​implications for Sweden, refrained from passing judgment on whether Sweden should join NATO, but noted that the country’s security would be negatively affected. if Finland joined and left Sweden as the only non-member country in the Nordics. and the Baltic regions.

The invasion of Ukraine, which is a NATO partner but not a member, showed the dangers of remaining outside the alliance’s collective defense structure, he noted.

The report also highlighted the dangers of joining NATO, acknowledging that Russia would react negatively to such a move. The most likely response would include various types of influence activities against the general public or Swedish decision-makers, he said, stressing the importance of obtaining security guarantees from alliance countries during any period. transition before Sweden becomes a full member.

Sweden and Finland have remained outside the US-led Cold War alliance since its inception in 1949, but Russia’s invasion of Ukraine is forcing the two nations to choose sides.

Finland’s president and prime minister said on Thursday that their country should apply for NATO membership without delay. The decision, which is expected in the coming days, must be approved by parliament.