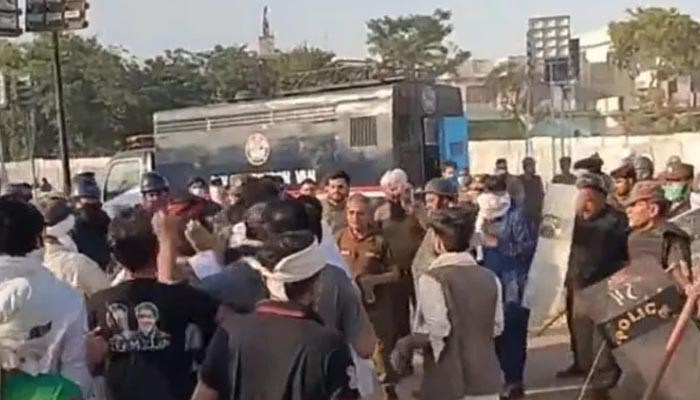 PTI workers and police clash at the CTI grounds in Sialkot on May 14, 2022. TwitterImran Khan confirms his visit to Sialkot today, rebukes the government.Police charge PTI workers and evacuate the place of the gathering. The place changed for the jalsa because the Christian community had objections.

The PTI on Saturday changed the location of its public rally from CTI Ground, a property of the Christian community, to VIP Ground in Sialkot after the community lodged a protest because the party had not obtained their prior permission for the rally.

The police launched a crackdown on PTI activists early in the morning and evacuated the rally site after attempting to hold a public meeting on the CTI grounds, owned by the Christian community, without their consent.

The Sialkot district administration had also a day ago rejected the PTI’s request to hold a rally at the CTI grounds after the Christian community raised objections about the meeting at their property.

In a series of tweets, PTI chairman Imran Khan confirmed he would address the Sialkot jalsa and said the administration’s actions against party leaders were ‘outrageous, but not unexpected’ .

“This gang of criminals out on bail and their convicted mafia boss in London have always used fascist tactics against their opponents,” the ousted prime minister said.

The PTI chairman has held a series of jalsas in different cities including Karachi, Mianwali, Lahore and Peshawar as he rallies workers and his party leaders against the government ahead of the Islamabad march.

Khan accused the government of using and abusing democracy when in opposition and claimed that he totally destroyed all democratic norms when in power.

“But people have now risen up against them.”

The PTI President reminded PML-N that during his party’s government, they never stopped any of their jalsas, sit-ins or rallies because they were committed to democracy.

“I will be in Sialkot today and I call on all our people to come out and demonstrate in their areas after Isha’s prayers against this imported fascist government,” he added.

What happened during the day?

Earlier in the day, PTI leader Usman Dar, accompanied by around 20 PTI workers, arrived on the ground and began preparations for a rally, during which police launched a crackdown and arrested Usman Dar and many other party workers.

We have prevented the PTI from holding a public meeting at the PTI grounds at the request of the Christian community, Deputy Commissioner Sialkot Imran Qureshi said.

He said permission is required to hold a public meeting in a private place. Intervening at the request of the minority community, the police had the CTI site evacuated. The Christian community told police they were performing their religious rites on the grounds.

The Christian community was protesting PTI’s call to hold a rally at their property, the district administration said.

Following the police action, many PTI workers showed resistance, but the police loaded batons and used tear gas to disperse the PTI workers.

The Christian community approached the Lahore High Court, the DPO said, adding that the police had taken action by order of the court to prevent the PTI from staging the rally.

The DPD, however, said: ‘We are prepared to give PTI an alternative venue for public gatherings.

Dismissing the arrest reports, DPO said no one was arrested, adding that they were only removing chairs and other items kept here.

“Our peaceful people have been beaten; holding a jalsa is our democratic right. The administration tortured our workers on the directives of Khawaja Asif,” Mehmood said, promising the rally would continue no matter what.

Confirming the change of venue to the Vip Cricket Ground, the former education minister urged the local administration to release PTI leaders including Usman Dar.

Chaudhry warned Asif of the consequences in response to today’s events, but assured the government that if he remained peaceful, so would the party.

The PTI wants to sow anarchy’

Speaking to reporters in Lahore, PML-N leader Attaullah Tarar said the PTI is holding rallies all over Punjab but the government has not caused any obstacles and provided them with security. .

Responding to a question about the police action against PTI jalsa in Sialkot, Tarar said, I propose that there is a stadium in Sialkot, why don’t you hold your rally there? But in reality, the PTI wanted to hold its jalsa on church grounds and wanted to sow anarchy; we won’t allow it.”

Tarrar questioned whether the PTI would allow the PML-N to hold a jalsa on the grounds of Bani Gala and warned that if the party stuck to holding a rally on the grounds of the church, PTI members would be sent to prison.

Reiterating that the government would allow them to hold their rally anywhere else, he said that if necessary, the authorities would arrest the Sialkot leaders of the PTI.