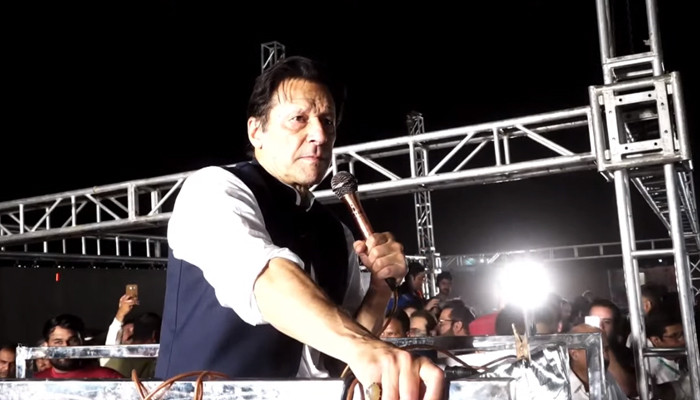 Former Prime Minister and PTI Chairman Imran Khan addressing a party rally in Sialkot, May 14, 2022. YouTube/PTIKhan says the video mentions figures behind the ‘plot’ against the PTI. The president of the PTI affirms that a “conspiracy” is hatching to kill him. Khan asks the courts to ensure the safety of officials investigating corruption.

SIALKOT: PTI chairman Imran Khan said on Saturday he had recorded a video of the people behind the “plot” against his government, and if anything happened to him it would be released.

The deposed prime minister, in his speech to the jalsa of Sialkot, said a ‘plot’ was being hatched to take his life and although he had known about it earlier, he now has enough evidence to confirm it.

PTI president, in light of alleged plot to kill him, says he recorded a video and stored it in a ‘safe place’ in which he mentioned every figure who was behind the ‘plot’ aimed at overthrowing his government.

“They (without specifying) decided to kill Imran Khan. And that’s why I recorded this video because I don’t consider what I’m doing as politics, but it’s jihad for me,” said the president of the PTI.

Khan said he named everyone involved in the “plot” abroad and at home. “I said in the video that the names of all the people who conspired against my government are engraved in my heart.”

The President of PTI said that the reason behind his video is that in Pakistan powerful people are not held accountable, thus through this video he will expose all those who have gone “against the interests of the country “.

‘Where are my courts?’

Read more: Neutrals were not neutrals in a foreign plot »

Khan claimed another FIA official, Nadeem Akhtar, also suffered a heart attack yesterday. “I want to ask a question: Officers who investigate mafia cases are under great pressure, how is that possible? Where are my courts? It’s your job to make sure they’re safe.”

“We never stopped their gatherings”

The Sialkot jalsa is underway after increased political activity in the early hours of Saturday as the Christian community protested against the PTI’s initial rally location.

At the complaint of the Christian community, the police evacuated the premises and, as some PTI workers and leaders intervened, they were arrested in the process.

The PTI then changed the location of its public gathering from CTI Ground, a property of the Christian community, to VIP Ground in Sialkot, as it had not obtained their prior permission for the gathering.

Read more: Khawaja Asif announces major decisions to revamp the economy in the next 48 hours

Following this, PTI leaders and workers, including Usman Dar, were released.

Reacting to the action of the Sialkot police and local administration against the PTI workers, the party chairman said the party of PML-N leader Nawaz Sharif was an equal “coward”.

Khan, criticizing the government, said that when the PTI was in power, it did not stop the then opposition from organizing long marches, rallies or sit-ins.

“Every three months they [PML-N would come to Islambad] overthrow our government. The biggest disease, Asif Ali Zardari, and the person who sells the diesel permits, Maulana Fazlur Rehman, were also with you at the time,” Khan said.

Khan said his party had always remained peaceful, but warned Interior Minister Rana Sanaullah and the government that if they resorted to violence they “would have no place to hide”.

Moving on, ex-Prime Minister Khan said that after the first independence struggle, which led to the creation of Pakistan, the nation was struggling for “true independence” for the second time.

Turning his guns on Foreign Minister Bilawal Bhutto-Zardari, Khan told the PPP chairman to remember that foreign agencies knew where “his bank accounts” were.

“You won’t be able to look them in the eye and talk,” Khan told Bilawal.

“Khan left the economy on a ventilator”

In response, Defense Minister Khawaja Asif, in an interview with Geo News, said the economy left behind by the Imran Khan-led government was on a ventilator.

Speaking about the deteriorating economy of the country, the Defense Minister said that the corruption of the previous government had hurt the economy, adding that “if Imran Khan knew about politics, Pakistan would not be in this state today. ‘today’.

“Talking about things like that makes Khan’s mental state questionable. Every time politicians lose power, they say their lives are in danger,” he said, adding that “the plot to assassinate him ” of Khan is only an act.

Criticizing the PTI-led government, Asif said Khan had no place in the country’s dignified political system.

He said the PTI leaders never complained “as long as they got help”, but they did not prefer to be treated according to the law.