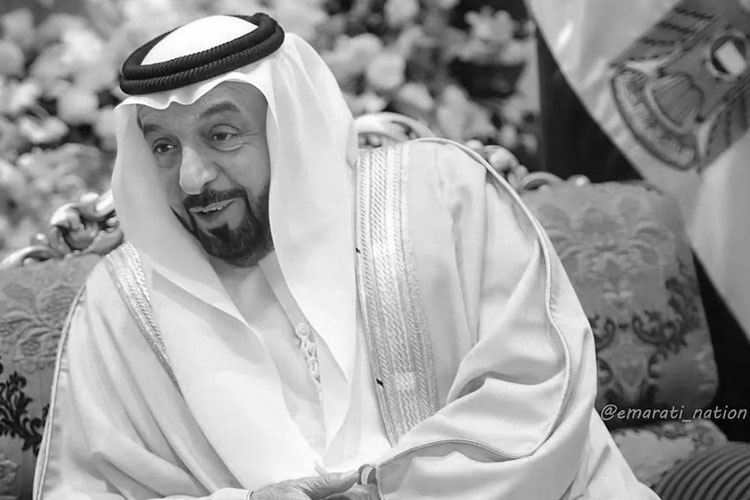 Tributes poured in from around the world on Saturday after the United Arab Emirates announced the death of President His Highness Sheikh Khalifa Bin Zayed Al Nahyan. He was 73 years old.

She added, “Our thoughts and prayers are with Your Highness and the people of the United Arab Emirates during this time of mourning.”

Prime Minister Lee wrote: “His Highness Sheikh Khalifa has dedicated his life to serving the people of Abu Dhabi as well as the United Arab Emirates. His Highness played a key role in strengthening the unity of the federation and improving the lives of his people. Under Your Highness’ reign, relations between Singapore and the United Arab Emirates were strengthened with the establishment of the Singapore Embassy in Abu Dhabi in 2007.”

He added, “His Highness’s leadership has laid a solid foundation for the bilateral relationship, which has since been strengthened with the Singapore-UAE Comprehensive Partnership (SUCP) signed in 2019.”

“It is with deep sadness that I learned of the passing of President Sheikh Khalifa,” Widodo tweeted early Saturday.

“He will forever be remembered as a great leader who consolidated the prosperity of the UAE,” added the Indonesian President.

Ibrahim Mohamed Solih, President of the Republic of Maldives, expressed his condolences on the passing of Sheikh Khalifa Bin Zayed Al Nahyan.

“Saddened to learn of the passing of the President of the United Arab Emirates, Sheikh Khalifa. A visionary leader, His Highness was a close friend to the Maldives,” he tweeted on Friday evening.

Ilir Meta, President of the Republic of Albania, expressed his condolences on the death of His Highness Sheikh Khalifa.

“I learned with sadness of the passing of the President of the United Arab Emirates, Sheikh Khalifa,” President Meta tweeted on Friday evening. He praised Sheikh Khalifa’s contributions to strengthening Albania-UAE relations, development and progress of the UAE.

The Greek Foreign Ministry mourned the death of Sheikh Khalifa.

“We extend our heartfelt condolences and deepest sympathy to his family, to the people and to the government of our close friend and strategic partner in the United Arab Emirates,” the ministry added.

The French Ministry for Europe and Foreign Affairs mourned the death of His Highness Sheikh Khalifa Bin Zayed Al Nahyan, who passed away on Friday.

In a statement, the ministry said: “France has learned with great sadness of the death of His Highness Sheikh Khalifa Bin Zayed Al Nahyan, may Allah Almighty have mercy on him, and sends its deepest condolences to the leaders and the people of the United Arab Emirates.”

“With the death of Sheikh Khalifa Bin Zayed Al Nahyan, the people of the Emirates have lost a leader respected by all, and we salute his deep commitment to stability and peace in the region and in the world”, added the communicated.

Tokyo Governor Yuriko Koike has canceled her trip to the Middle East, which was due to start today, following the death of Sheikh Khalifa.

Koike, an Arabic speaker who previously served as the president of the Japan-UAE Parliamentary Friendship League in Japan, offered her condolences on behalf of the citizens of Tokyo, expressing her sadness and sympathy for the people of the UAE.

“We will always remember Sheikh Khalifa’s distinguished achievements in promoting friendship and goodwill between Japan and the UAE,” Koike said in a statement.

Google Pixel 6a may fix the biggest problem with Pixel 6