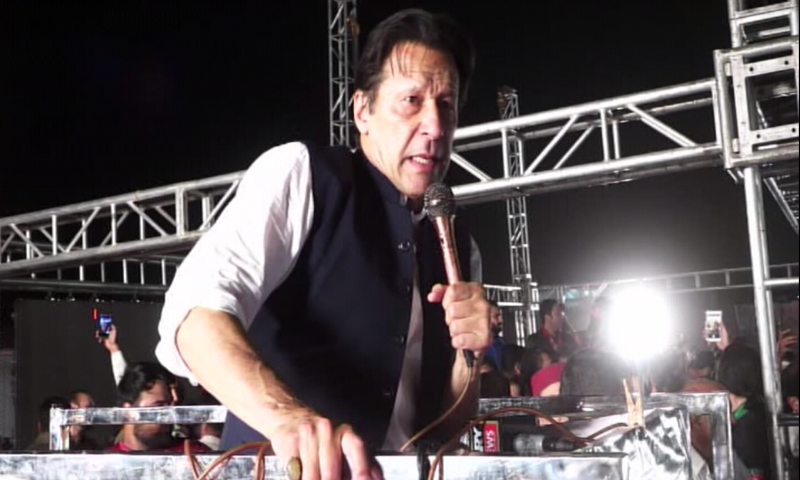 PTI chairman and former prime minister Imran Khan said on Saturday his life was in danger and he recorded a video in which he took the names of everyone who “conspired against me” since last summer.

Imran, who claims he was ousted from high office by foreign powers through local actors due to his pursuit of an independent foreign policy, made the remarks on his party’s political power show in Sialkot. “There is a plot hatched against me in locked rooms inside and outside the country, and they want Imran Khan’s life [is lost],” he said.

“I was aware of this plot…so I recorded a video and kept it in a safe place. If anything happens to me, this video will be [made public] before the nation. In it, anyone who’s conspired against me, anyone who’s been an accomplice since last summer, I’ve named everyone.

“They think Imran Khan may be an obstacle in our path and must be removed.” And that’s why I recorded this video because I think it’s jihad and not politics. If something happens to me, I want all my Pakistanis to know who was an accomplice in this plot.

“I named all those who planned and [revealed] how, by a foreign conspiracy, this corrupt fate, with them and others who were with them, brought an end to my government. I recorded the video because it is [part of the] story of how the powerful are never subject to the law and always stay safe. Those who have betrayed this country, I want their faces to be revealed,” the PTI President said.

The alleged threat to Imran’s life was first raised by Faisal Vawda during the last weeks of his government in late March.

Imran, in his speech tonight, said his stance on rooting out corruption was not shared by those in “powerful positions”.

“During my 3 and a half years, I did my best to ensure that those who plundered this country for the past 30 years were condemned and taken action against them, but those who were in powerful positions, who were supposed to do justice, did not see corruption as evil. They accepted that the powerful will steal and no one will catch them.”

Imran urged his followers to participate in his planned march to Islamabad, warning that if they don’t, “this country will be destroyed.” He told his audience to brave the climatic difficulties that the scorching summer is likely to impose on them on their way to the capital.

The PTI president also called on young people to “start preparing immediately” for the march, adding that the government would try to hinder the march by putting restrictions on transport, petrol, internet and other services.

He predicted that a “sea of ​​people” would be at his side as he headed towards Islamabad.

Imran also questioned the judiciary on his handling of corruption cases against the Sharif family since the new government came to power, alleging that Federal Investigation Agency officials were either transferred or threatened.

Imran alleged that Hamza “threatened” Rizwan due to which he was under “tremendous pressure” and died as a result.

“Where are the courts? It’s up to you to protect them,” Imran said, denouncing the pressures suffered by those investigating the “mafia”.

He also lambasted the new government on the economic front, saying the PTI regime had left it at a promising stage but since the ‘regime change’ the rupiah had depreciated alarmingly and the stock market sank. was collapsed.