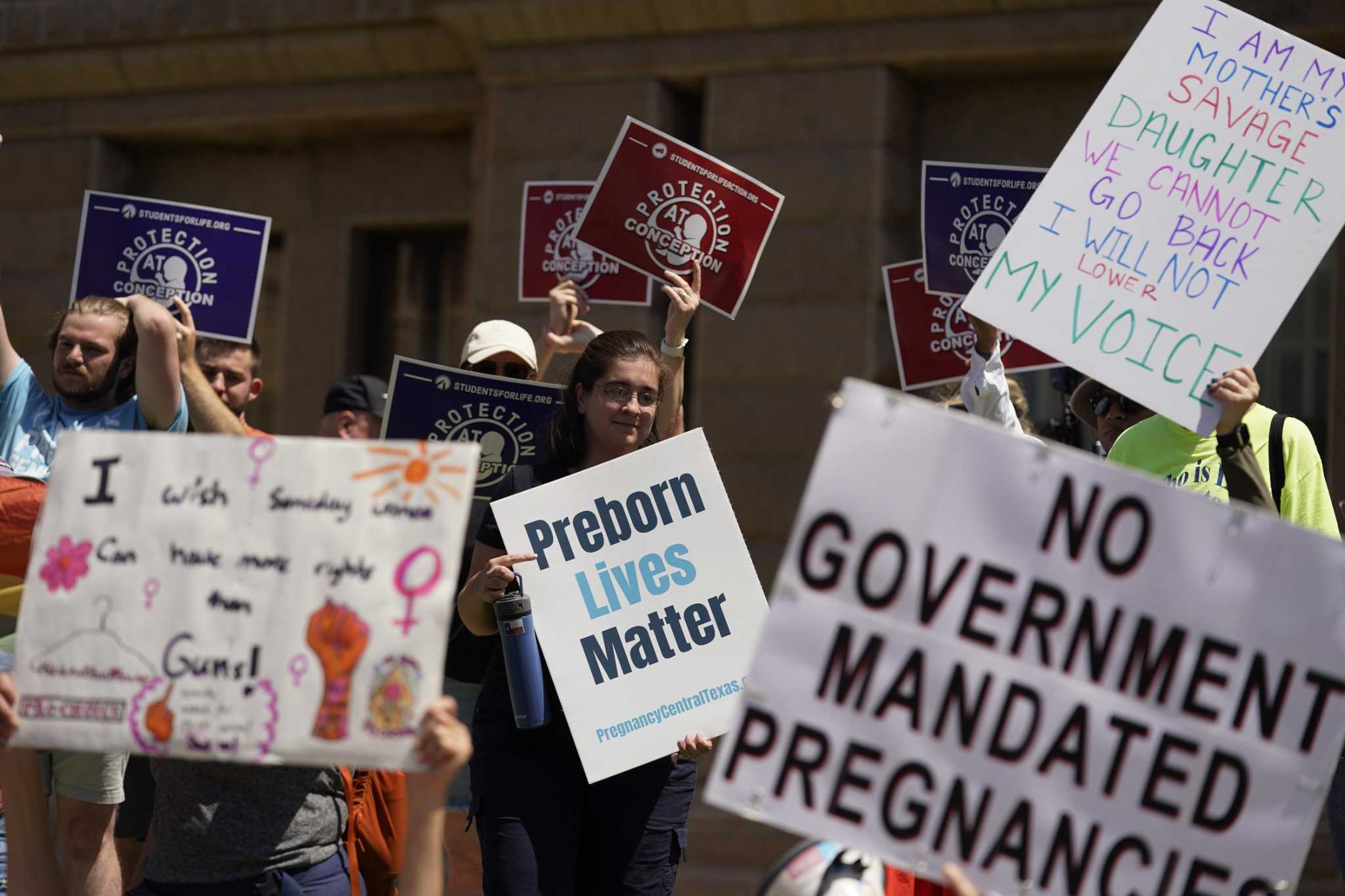 A duel of political rallies downtown on Saturday, an abortion rights protest at the Texas Capitol hosted by Democrats and an event hosted by former President Donald Trump at the Austin Convention Center perfectly illustrated the current state of the Texas politics.

More than a thousand people gathered in the 95 degree heat to protest the likely demise of Roe v. Wade, the ruling that codified a constitutional right to abortion in 1973. A stage was set up on the steps of the South Capitol, where speakers took turns protesting Republicans, leading chants and calling for additional protections against abortion.

The prevailing mood was one of anger at Governor Greg Abbott, anger that Republicans seek to legislate women’s medical decisions, and anger that Democrats in Texas are essentially powerless to stop them, as demonstrated by the Last year the passage of Senate Bill 8 states a 6-week abortion ban.

Meanwhile, at the convention center, Trump supporters paid $100 to $5,000 per seat. The event is not a campaign rally or fundraiser. Trump held such a rally in Conroe in January, but is a for-profit venture featuring an array of conservative speakers and rocker Ted Nugent.

Abortion rights protesters attend a rally at the Texas Capitol, Saturday, May 14, 2022, in Austin, Texas. Protesters are rallying coast to coast in the face of an early Supreme Court ruling that could overturn women’s right to abortion. More (AP Photo/Eric Gay)

The former president and other speakers; which include Donald Trump Jr., former Fox News personality Kimberly Guilfoyle and former Secretary of State Mike Pompeo; were lined up to trumpet the accomplishments of the 45th president and the Republican Party before a crowd of thousands in the air-conditioned convention center.

By mid-afternoon, the Trump event looked more like a business conference than a fiery political rally.

The tone had changed a few hours later, when Nugent urged the crowd to vote, cajole or even use force to convince his relatives of the evil of the Democrats in Washington: I love you all but I will love you more if you advance and go furious on the skulls of democrats, marxists and communists.

Speakers attacked President Joe Bidens’ mental capacity, the state of the economy, the war in Ukraine and government spending. They said Democrats wanted to steal elections, show pornography to young children in schools, and introduce institutionalized racism in the form of critical race theory.

The midterm elections are approaching, the speakers said, and this is a critical opportunity to regain power in Washington to turn things around.

“The Biden administration is a disaster of historic proportions, but don’t give up hope,” Trump, the final speaker, told the audience.

He hinted at a campaign announcement soon, to warm applause.

“We’re waiting to see how bad it gets, and very soon I think everyone in this room is going to be very happy.”

AUSTIN, TX – MAY 14: Anti-abortion protesters attend a reproductive rights rally at the Texas Capitol on May 14, 2022 in Austin, Texas. On May 2, 2022, Politico released a leaked draft Supreme Court majority opinion in Dobbs v. Jackson Womens Health Organization that explicitly overturns Roe v. Wade, which would overturn constitutional protections for abortion across the country. (Photo by Montinique Monroe/Getty Images)

In Texas, Democrats haven’t elected a statewide official in a generation. Democrats are minorities in the State House and Legislature, and recent Republicans have moved away from a tradition of civility and bipartisanship on Capitol Hill, instead embracing conservative priorities with little or no Democratic buy-in. With the reins of power in hand, Republicans have drawn political maps that benefit them, making it even more difficult for Democrats to fight back.

Democrats stand in the sun screaming. And Republicans are enjoying the air conditioning, discussing their many victories and planning more to come.

Abortion rally protesters said a combination of pragmatism and a desire for emotional release brought them there. They hoped that a show of solidarity would be enough to change the laws lawmakers are pursuing on Capitol Hill, or that it might translate to votes in future elections. But for many, it was also a chance to let go of anger, stress and despair for the future with a like-minded crowd.

Abortion rights protesters attempt to block anti-abortion protesters at the Texas Capitol, Saturday, May 14, 2022, in Austin, Texas. Protesters are rallying coast to coast in the face of an early Supreme Court ruling that could overturn women’s right to abortion. More (AP Photo/Eric Gay)

Anti-abortion protesters are separated from state police abortion rights protesters during a rally at the Texas Capitol, Saturday, May 14, 2022, in Austin, Texas. Protesters are rallying coast to coast in the face of an early Supreme Court ruling that could overturn women’s right to abortion. More (AP Photo/Eric Gay)

Anti-abortion protesters are separated from state police abortion rights protesters during a rally at the Texas Capitol, Saturday, May 14, 2022, in Austin, Texas.

I am very worried. I try not to let this ruin my life, but a lot of women my age are, said Karen Mangan, in her 60s, of Blanco County. She said she has gotten used to having certain rights, including her right to abortion, and now feels stripped. She has never been more concerned about the future of the United States.

Mangan said the rally might, might sway the Legislative Assembly, but she has no hope. She noted that the Women’s March in 2017 drew huge crowds across the country.

That didn’t stop Trump from being in power for four years, she said. We have to let go of a little rage, to be able to go on, to live our lives.

U.S. Representative Lloyd Doggett, a Democrat from Austin, made similar notes in his speech at the rally. It’s not just about expressing our justified anger, he said.

What we have to overcome is elsewhere in Texas, their lies outsell our truth, Doggett said. Nobody here needs to be convinced that we won’t win this fight at the courthouse, so we have to win it at the ballot box.