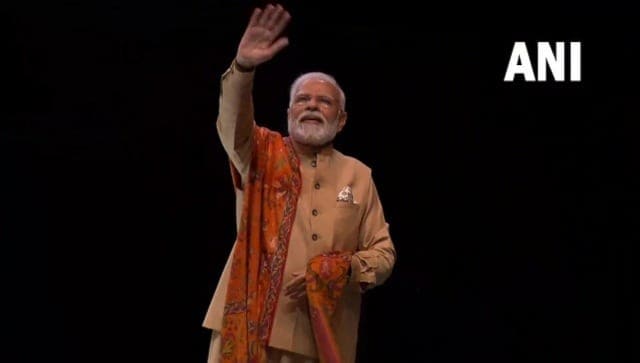 The Economists’ tone reflects the colonial attitude of his home country, Britain, towards a subject of yesteryear. Prime Minister Narendra Modi greets members of the Indian community as he concludes his speech at the Potsdamer Platz theater in Berlin, Germany. ANI

Just before India’s 2014 general election, The Economist chose sides. He urged Indians to vote for Sonia and Rahul Gandhis Congress.

India knew better. He threw out the corrupt Congress with a massive mandate and put the Narendra Modi-led BJP in charge. Five years later, he has defied Western media advice by an even greater margin.

Three years later, the editor of The Economist reluctantly concedes good things about India. So reluctantly, it almost cuts out on the keyboard trying not to credit Modi for the changes that have swept India.

A new convergence of forces is set to transform India’s economy over the next decade. As the cost of technology has plummeted, the country has rolled out a tech stack: a set of state-sponsored nationwide digital services that link ordinary Indians to electronic identity, payments and tax systems and bank accounts. , The Economist writes. The rapid adoption of these platforms has turbocharged the worlds third startup scene after Americas and Chinas. Alongside this, India is building bigger business clusters, including in technology and renewable energy, and is hoping to get supply chains to shift from China. It also used a direct, real-time, digital protection system to pay $200 billion over three years to around 950 million people who would have defaulted.

Note the emphasis on the factors of a new convergence of forces and not the efforts of the government. However, The Economist does not give credit entirely on the Event accident. It does honor to humans. But who ?

Behind this lies the Bharatiya Janata Party (BJP), which benefited from global trends and the work of his predecessors, but he also got things supporting cell technology and well-being directly, and persevering with painful task of shrinking the informal economy. It is headed by Narendra Modi, whose domination is both a source of stability and a threat, he wrote.

So most of the benefits come from global trends and the work of his predecessors, while Modi seemingly remains a threat. Why?

One risk is the BJP’s abhorrent hostility towards Muslims, which it uses to rally its political base. Modi also indulges his cronies and is thorny and vindictive towards his critics, co-opting bureaucracy to bully the press and the courts, he writes.

Ultimately, for the liberal media, it all comes down to how political Islam views an individual or a society. There is no empirical or data-based evidence that more Muslims are being targeted with Modi’s advent. Left-wing and liberal media have painstakingly concealed, downplayed or remained silent on Muslim attacks on upper-caste Hindus, Dalits and tribals with alarming regularity.

Only a week ago, a Dalit man was brutally murdered by relatives of his Muslim lover for daring to have a relationship with her. Just a day ago, in Kashmir, another young Hindu pundit man, Rahul Bhat, was killed by Islamist terrorists who have nearly cleansed the state of infidels since the genocide of the 1990s. Two weeks ago, Hindu processions were attacked in a dozen towns across India by armed Muslim mobs.

There has not even been a single report unequivocally condemning or denouncing these acts of Islamist violence in Modis India in The Washington Post, The New York Times, The Guardian or The Economist.

Western media has made no attempt to understand and highlight the historic injustices and waves of genocide perpetrated by Muslim invaders against Hindus, Sikhs, Buddhists and Jains.

And then there is the hypocrisy. When France proposed rules against Islamist violence and intimidation, The Economist never said President Emmanuel Macron was going after Muslims.

He struggles to credit Modi with anything. He never mentions that Congress had thought of Aadhaar but his ministers were only too eager to scuttle it. Modi used it, built on it.

PM reprimanded several times for crazy Hindu vigilante attacks on Muslims. He actually been less vocal about tirades and attacks against Hindus by Muslim crowds or leaders like Akbaruddin Owaisi.

And despite being a woman, The Economists editor Zanny Minton Beddoes fails to acknowledge what Modi has done for Indian Muslim women. His government banned the instant triple talaq, promoted girls’ education and scholarships among Muslims, raised the age of marriage and ensured that benefits from central regimes on direct benefit transfers, housing , LPG and health insurance reach Muslim homes without discrimination or neglect.

The Economists’ tone reflects the colonial attitude of his home country, Britain, towards a subject of yesteryear. The weekly, like most other Western media, sees itself as India’s self-proclaimed new viceroy. Their hollow and moralizing sermons must be listened to. India must see itself on its own terms. They are the vanguards of liberal and globalized Western democracy. They know India better than even the Indians.

That India no longer exists except in the Western media colonial nostalgia. It’s time The Economist and others smell the coffee from Araku Valley or Coorg.

Donald Trump rallies Republican voters in Texas ahead of 2022 midterms