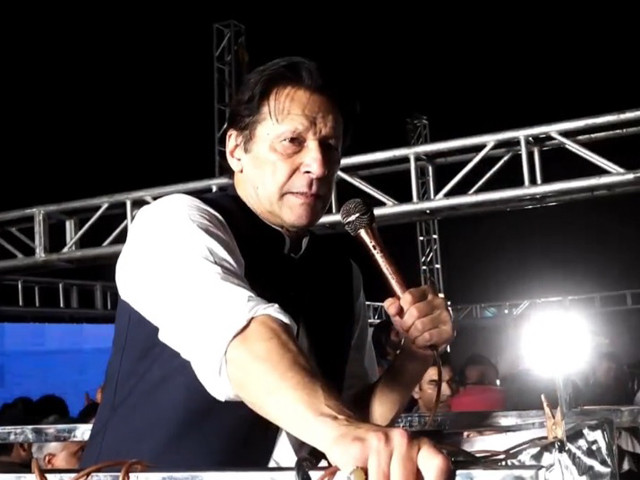 Pakistan’s Tehreek-e-Insaf chairman Imran Khan dropped a bombshell on Saturday, saying an “assassination attempt” was being made against him – video evidence of which has been kept in a “safe place”.

The former prime minister, who is set to take the plunge to the federal capital, made startling claims during a packed public rally in Sialkot on Saturday.

In what was a prelude to his “Azadi march” as the country braces for another acrimonious chapter in the political landscape, Imran told his supporters that a plot was being orchestrated against his life, saying: “I have named all those elements involved in the conspiracy. in the video. I knew it and I became fully aware of it a few days ago.

Explaining why he recorded the video, Imran said, “If anything happens to me, I want to let Pakistanis know who was involved inside and outside the country.”

He said he tried to expose in the video the conspirators who colluded with the ‘looters’ in the country, adding that his video would essentially expose all the ‘traitors’ and anyone who played a role in the alleged conspiracy.

“They think Imran Khan may be an obstacle in our path and must be removed.” And that’s why I recorded this video because I think it’s jihad and not politics. find out who was an accomplice in this plot.

He added that he was asking the nation for a sacrifice to liberate the country from looters and looters. the thoroughfares leading up to the Federal Capital – the final battleground where Imran Khan seeks to nail his colors to the mast.

Imran also criticized the authorities for their alleged attempts to prevent his party from holding the rally.

Addressing his supporters, he claimed that when he was in power, his party never stopped his political opponents from staging protests.

Earlier today, the PTI changed the location of its Sialkot rally to a VIP cricket ground after police prevented its workers from preparing the CTI ground for the public rally on the grounds that it had not permission to hold a gathering there.

Members of the minority community had protested and filed a lawsuit against the use of church land for political purposes.

“Former Prime Minister Imran Khan will be granted security according to his rank,” the DPO said, adding that the gathering was stopped at the CTI grounds so as not to hurt the feelings of the Christian community.

PTI workers were prevented by the police and the Sialkot district administration from organizing a rally on the grounds of the CTI, as security forces used tear gas and batons to disperse supporters of the CTI. party who had resisted this decision.

During the dispute, police arrested PTI leader Usman Dar and several other party activists after permission to hold a rally at the previous site was denied by DC Imran Qureshi.

Footage showed police on the grounds of the CTI, with PTI activists standing atop a stationary crane in what appeared to be an attempt to stop the LEAs from dismantling preparations for the rally. Clouds of tear gas could also be seen in the footage.

During his speech, the PTI chairman blamed the fiasco on Pakistan Muslim League (PML-N) supremo Nawaz Sharif, calling him and his party “cowards”.

“We are the followers of the Prophet (PBUH) and we will never bend to any superpower…we never fear that anyone will accept Allah.”

Mocking his rivals, Imran said: “Three sidekicks [Shehbaz, Zardari and Fazlur Rehman] should listen that they cannot hinder the path of this Azadi movement. This is not politics, but a revolution that is coming.

Addressing young people specifically, he said: “Be prepared, I’m sure your passion will conquer all.” He also told them to “turn off gas pumps, transportation and the internet” when he calls to do so.

Referring to the pressure exerted on those who investigate the mafias, he asked: “Where are our courts and how will our institutions deal with such criminal elements? Imran then asked the judiciary why she was not taking any action when she had witnessed the “destruction of the country and national institutions”.

“If you don’t want to catch them and punish them, then free all the petty criminals who are currently behind bars.”

Read also: Those who consider institutions weak are naïve: Rashid

The PTI leader claimed the country had achieved the highest industrial progress during his rule, with the crowd cheering in approval of his views.

“Pakistan has seen its industries, crops and exports reach new heights while unemployment has fallen under my government,” he said.

Explaining further, Imran said that now that the “looters” are in charge, inflation has soared and stock markets are collapsing.

Reiterating his oft-quoted position, he said the country could not move forward until the powerful were brought to justice.

Concluding his speech, Imran invited the people of Sialkot to march towards Islamabad at his call. “I am convinced that you are now sufficiently trained for this.”

On April 10, Imran Khan, Pakistan’s 22nd prime minister, became the first chief executive to be removed from office after losing a majority in the National Assembly.

Imran’s party, which ruled the country for more than three and a half years, struggled to stay in power as its allies betrayed to join opposition parties that had joined forces against the government.

While Pakistan’s history has been marked by political instability, no prime minister has ever been removed from office by a vote of no confidence.

Since his ouster, Imran has maintained the position that the no-confidence decision was the result of a conspiracy hatched abroad by those who did not want Pakistan to pursue an “independent foreign policy”.

China’s military could be targeted by Japan’s counterattack capability