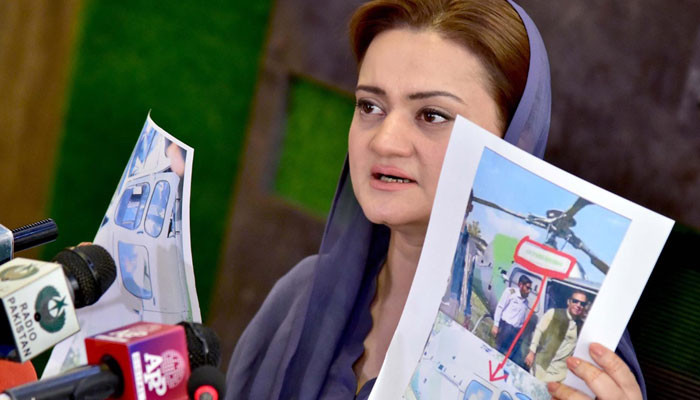 Marriyum Aurangzeb during a press conference in Islamabad on May 14, 2022. Photo: PID

ISLAMABAD: Federal Information and Broadcasting Minister Marriyum Aurangzeb said on Saturday that former Prime Minister Imran Khan had become a threat to the state as he repeatedly tried to stir up unrest and anarchy in the country.

“At PTI meetings, state institutions, including the judiciary, are abused to sow unrest and lawlessness, simply because Imran Khan is no longer in government,” he said. she noted while speaking to the media here.

Asked to comment on a series of statements made by the President of Pakistan Tehreek-e-Insaf (PTI), Imran Khan, regarding the “neutrals” and how they did not choose to thwart the “foreign conspiracy against him”, she argued that the right to free speech did not cover anti-institutional remarks or hate speech, and anyone who did so would be prosecuted according to law.

The minister said: “When you attack the institutions of the state, there will be legal proceedings against you, and it is the responsibility of the government that it knows how to assume”.

Marriyum said brazen disregard for the law of the land and blatant violation of the Pakistani Constitution could not become a norm. Such actions should be dealt with in accordance with the law in a way that would have a deterrent effect. The PTI was already repeating the same actions in Punjab, which necessitated the decision to act, she pointed out. She warned that corruption and incompetence could not be hidden under Imran Khan’s conspiracy narrative.

The minister said the worst damage inflicted by Imran Khan in Pakistan was social degeneration through the introduction of swearing, abuse, indecency and hooliganism as an essential part of the country’s politics. She said the economic turmoil caused by Imran Khan’s government would be resolved in the near future, but the social degeneration would take much longer and much more effort to rectify.

She said that after it was confirmed that the no confidence motion would succeed against him, Imran Khan illegally subsidized gasoline for his vested political interests and to deceive the public. He took neither the federal cabinet nor the Economic Coordinating Committee (ECC) into confidence over the grant, leaving the national economy in a complete mess.

Responding to a question about the meeting of Prime Minister Shehbaz Sharif and other members of his delegation with PMLN supremo Nawaz Sharif in London, she said that it was a private visit by the PMLN leaders and that his expenses were also not covered by the government. “There were consultations on how to deal with inflation, which was left behind by the PTI government,” she explained.

She said the events surrounding the vote of no confidence were also discussed at party meetings in London and a decision was made to deal with anything that was against the law or the Constitution.

The minister said that they must take some crucial decisions with collective wisdom and that a strategic plan will be presented very soon by Prime Minister Shehbaz Sharif in his address to the nation, and he will make announcements. She noted that the Prime Minister was due to visit the UAE at short notice to offer his condolences on the passing of former Emirati President Sheikh Khalifa Bin Zayed Al Nahyan.

However, she said the prime minister would consult with his allied political parties on strategy and all decisions before delivering his address to the nation. Asked about the possibility of early elections, she said the current configuration was a coalition government; therefore, the decision was for all allied political parties to make collectively. At present, she noted, a strategy was underway to reduce the burden of inflation and restore people’s confidence in the economy. She hoped that the government would complete its constitutional mandate.

She claimed Imran Khan should give answers to questions regarding constitutional transgressions he committed from April 3 to April 11, and he held NAB hostage and announcements were always made two days before making arrests by NAB. The minister blamed the Imran government for inflation and claimed that when the PMLN ended its term in 2018 inflation was 3.9%, and when the PTI government was sacked it was 13 %. Moreover, in 2018, food inflation was only 2.3%, then it reached 15%.

She continued that the electricity tariff per unit in 2018 was 11 rupees and in the following four years it was increased to 24 rupees per unit and similarly DAP fertilizer in 2018 was sold for 2 400 rupees per bag, and in the PTI scheme it reached 10 rupees. ,000. The dollar had hit Rs 189 when the PTI government was ousted, and six million young people have been left jobless in the past four years.

Referring to Imran’s speeches and statements, she said the more he spoke, the more he would expose himself to the masses and be questioned about his incompetence, incapacity and corruption. “Neither we are fascists like you, nor are we afraid of your speeches,” Marriyum told Imran, adding that the more he slandered and lied, the more it would benefit the PMLN government.

She asked Imran Khan in what capacity he used the Khyber-Pakhtunkhwa government helicopter for PTI public meetings. She regretted that the one who spent 1 billion rupees to use a helicopter as prime minister was questioning others, but it was time for him to give answers on his four years of bad governance.

She regretted that former Prime Minister Imran Khan had weakened Pakistan’s position in the community of nations, damaged relations with friendly countries, destroyed foreign policy, continually lied to Pakistani youth and brought the Pakistani people to the brink of financial disaster during his four-year rule.

About the Silakot incident, she said: “We are not afraid of Imran Khan’s speeches because they only expose his own mindset to the public. The PTI was informed on May 9 that the Christian community did not want to donate the church grounds of Sialkot for a public gathering, as there had been no such political activity there before, being a place reserved for religious activities”.

She said that following the expression of the Christian community’s reservation, an alternative venue for the public gathering was offered to the PTI, but the latter continued with their fascist tactics and this led to the Christian community protesting. Friday evening and Saturday morning. “It is our duty to protect the rights of Christians. The PTI should also have respected the rights and feelings of Christians, but they did not,” she said.

Marriyum said this issue was not between the government and Imran Khan, but between the Christian community in Pakistan and the Imran-led PTI. DC Sialkot had repeatedly told PTI that the Christian community had refused to allow any political activity on the ground. The DC office told the PTI to change their location, which was refused due to Imran’s fascist mindset. She said Imran Khan was desperate to create a situation where he could claim his public meetings were obstructed by the government, for which he and his party went to insane lengths to lie. Neither the Federal Government nor the Punjab Government or Rana Sanaullah have anything to do with it. It was only the protest of the Christian community.

However, she made it clear that Rana Sanaullah would act when Imran Khan and his cronies call for a blood-hated march. “I repeat, no matter what Imran says, no matter what he does, no matter how many lies, abuse, hooliganism, intimidation he does, the elections will be held on time and this government will complete the term,” she said.

She said this whole façade of rebellion was simply because Imran wanted to return to power where he was having the best time of his life, earning billions from his high profile figures while throwing his political opponents behind bars, by twisting the arms of the media to force censorship, and to shoot and kidnap journalists who refused to comply with his orders.

She said that decision and others will be taken by consensus with parties allied with the government. She also told the media that Prime Minister Shehbaz Sharif will address the nation on this decision to take action against the violation of the Constitution. She said Prime Minister Shehbaz, in his address, would also talk about NAB and issues related to its past and present. She also warned that the PMLN believed in freedom of expression more than anyone, but if anyone disparaged national institutions, they would be dealt with according to law.

Trump is wrong about everything except Mitch McConnell