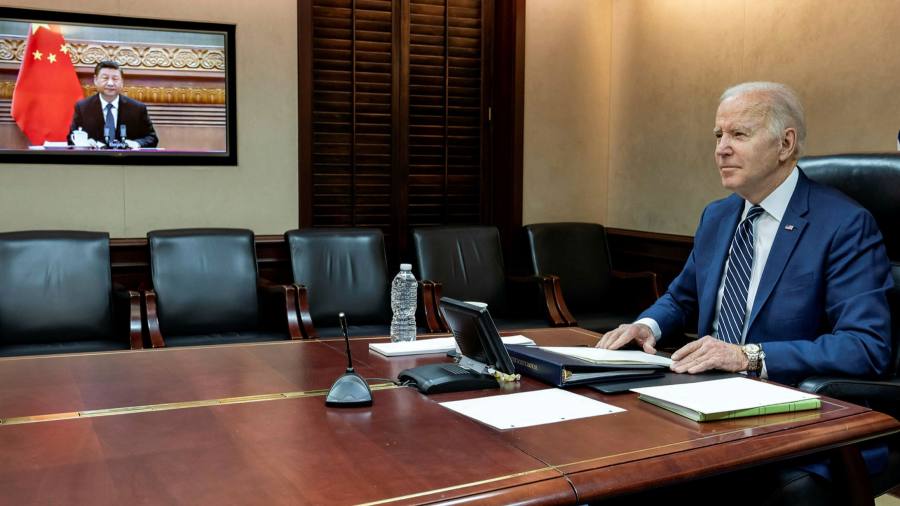 Whatever Russia does in Ukraine, the Chinese threat remains Joe Biden’s priority – he has made that clear. What he is reluctant to air, however, is that America approaches the duel with China with one arm tied behind its back. The United States is happy to increase its military budget, send more ships to the South China Sea and launch nuclear submarine agreements with Australia. However, lose the idea of ​​taking serious economic initiatives with the most dynamic region in the world.

The glaring imbalance in Biden’s China policy will be on full display this week when he visits South Korea and Japan. It follows Biden’s summit last week with leaders of ASEAN, the Southeast Asia group, where the United States announced a modest $150 million fund for maritime security, the clean energy and anti-corruption initiatives. This insignificant wish list is equivalent to a few days of Chinese investment in its Belt and Road Initiative, or about two hours of Pentagon spending.

The asymmetry of Biden’s China policy increases the danger of what everyone fears – conflict with China. A superpower that is happy to discuss military aid and armaments, but reluctant to talk about trade and investment, tells its partners and enemies that it speaks only one language. This makes it more likely that the focus on military alliances will drive out other types of diplomacy with some chance of reducing US-China tensions. The most obvious of these would be a summit between Biden and Xi Jinping, which is not on the horizon.

The war in Ukraine has deepened the rhetorical imbalance of US Indo-Pacific strategy. Before Vladimir Putin’s invasion, Japan was reportedly always keen to explore a way to revive US membership in the CPTPP – the renamed Trans-Pacific Partnership, which the US left under Donald Trump. Instead, given Putin’s slashings, Japan seriously wonders whether it should become a nuclear power. North Korea is threatening to conduct a nuclear test while Biden is in the region, which means the same conversation is also taking place in South Korea. Biden will have to reassure the two allies that the American nuclear umbrella is still sufficient. Chinese wolf warrior diplomacy makes his job more difficult.

Biden’s containment strategy in China carries two risks. The first is that it is unlikely to work. Over the past three months, the United States has shown that it can decouple a major economy – Russia – from the global system with lightning speed. It is a tremendous show of power that has even friends like India thinking of ways to insure against the extraterritorial wrath of the United States. America’s willingness to use the dollar to punish wrongdoers is matched only by its reluctance to give its Asian partners what they crave most: access to the US market. The Indo-Pacific economic framework recently launched by Biden is certainly better than nothing, but it excludes market access. The US Treasury now speaks of “friend shorification” – confining global supply chains to friendly networks. But it’s unclear how the United States defines “friends.” This bothers most of America’s Asian partners, few of whom are democracies.

The world also doesn’t know what America means by “decoupling” from China. Decoupling has joined Washington’s lexicon, but the Biden administration is not about to define its extent. In the maximum version, this would mean dividing the world economy, which would force America’s partners to choose between the United States and China. Even Taiwan, whose prosperity depends on integration with China, does not want to have to make that choice. An effective U.S. Indo-Pacific strategy would allow partners to manage both, but balance China by increasing U.S. trade and investment. IPEF’s promise of common digital standards and clean energy assistance is no substitute.

The second risk is that China’s strategy dominated by Biden’s army becomes self-fulfilling. All of this can be explained in the context of American politics. America made a reckless gamble that China’s joining the World Trade Organization in 2001 would lead to China’s compliance with global economic rules and even its eventual democratization. This decision was an act of faith rather than a calculation. Biden is now riding the backlash, which says trade with China will bolster Xi’s autocracy: the opposite of the vision he replaced. Both theories are simplistic. But the latest is geopolitically dangerous.

The world is neither a zero-sum game, as is fashionable today, nor a positive-sum game, as the Washington Consensus once believed. The world is what its principal actors choose to be by their actions. It would be odd if Biden of all people put most American tokens on the Pentagon.

With echoes of Trump, GOP busts over $40 billion for Ukraine

No video will be found of Imran Khan’s stolen phones: Shahbaz Gill