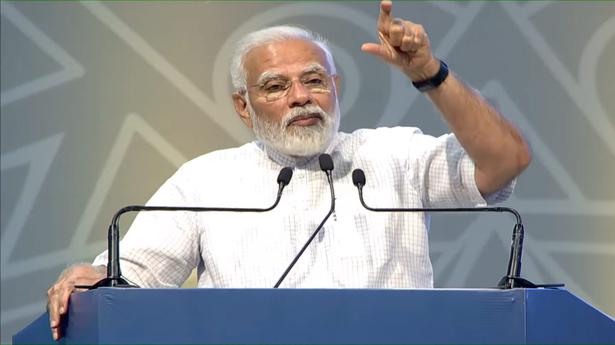 At the launch of a two-day drone festival, Prime Minister Narendra Modi on Friday hailed the use of technology over the past eight years as a bridge to achieve government benefits for the poor and spoke mocked those who create fear about it. He said that while the technology was previously seen as anti-poor, under him its use had proliferated among the masses, instead of being the preserve of the few.

It is a festival not just of technology, but of new India, new governance and unprecedented positivity. Eight years ago, when we put in place a minimum of government and a maximum of governance and made the ease of living and doing business our priority, we walked the path of sabka saath, sabka vikas to connect every individual to the government, the prime minister told Pragati Maidan in New Delhi.

He said his government had ensured technology was used to bridge the gap in service delivery and change the belief that it was only for the wealthy. It was his dream to see a cellphone in every hand, a drone in every farm and prosperity in every home, he said. He also attacked those who criticized governments’ reliance on technology.

Some people create fear around technology. Long ago, when people relied on clock towers, who would have thought there would be a watch on every wrist. Maybe some people want to erect clock towers again. We will have to change ourselves, only then will progress be possible, the Prime Minister told the assembly.

The government had received criticism for stepping up surveillance by making Aadhaar compulsory to receive government benefits, and most recently introducing the DNA Technology Regulation (Use and Application) Bill, 2019 to identify offenders, suspects, ongoing trials, among others.

We don’t deny that technology doesn’t create disruption. But it also opens new doors, he said.

Mr Modi said that before 2014, technology was seen as part of a problem, which was a loss for the poor, middle class and those with aspirations. Technology has ensured last-mile delivery and saturation of government programs, he said. The trinity of Jan Dhan, Aadhaar and mobile had helped the government to set up programs with full transparency and this is how the government ensured delivery of free rations to 80 million citizens during COVID-19 and conducted the largest vaccination campaign in the world. Drones took that promise of ease of life and would be another tool in the hands of the common man, the Prime Minister said. Be it urban or rural areas, agricultural fields or playgrounds, defense works or disaster management, the use of drones in the country is only going to increase.

He explained the various uses of drones by the government like in the Swamitva scheme for property mapping through which 65 lakh digital property maps had been given, precision farming as well as for law enforcement and order.

Will the stock market recover? 10 reasons the rally could be real.