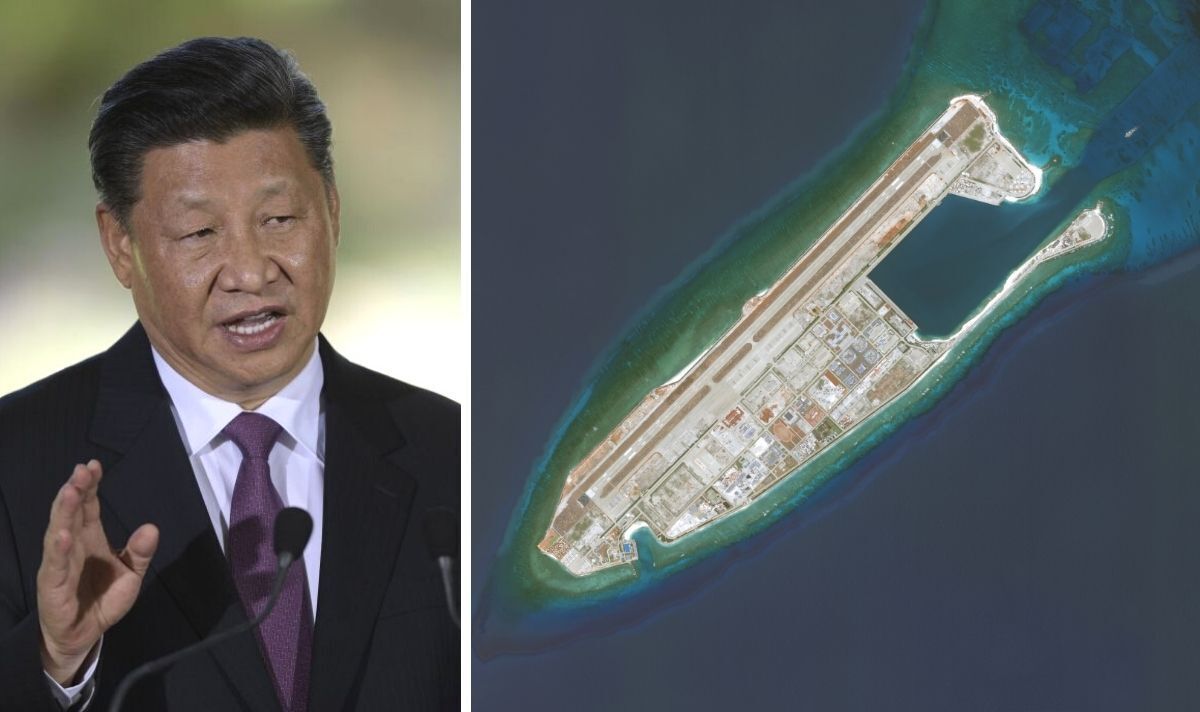 Zeno Leoni, professor of defense studies at King’s College London, told the Daily Express that Chinese President Xi Jinping has backtracked on “promises” made to former US President Barack Obama that China would not militarize islands in the South China Sea. There have been growing tensions in the region as China ignored an international court ruling against it on some of the islands, as Jinping argues the islands are China’s sovereign right.

Professor Leoni said: “Since 2013 and 2015, when Xi Jinping met Obama, there were promises that [China] would not occupy and militarize the islands [in the South China sea].

“It happened anyway. Very slowly, in a kind of gray zone warfare, acting below the threshold of outright warfare.

“I think it will continue, I guess, again in a nuanced way, trying not to upset the Western powers.

“And if China were to complete a militarization of these islands, that could be a game-changer, not so much in the region but locally, around the South China Sea, because that means China could, if it wanted to, blackmail other countries and block the flow of world trade for example.

It was revealed towards the end of March this year that China had fully militarized at least three small man-made islands in the South China Sea, according to a US military commander,

The islands, located near the Spratly archipelago in the middle of the South China Sea, are believed to have been built by the Chinese military, before being armed with anti-ship and anti-aircraft missile systems, laser equipment and jamming and fighter jets.

US Indo-Pacific commander Admiral John C Aquilino said the islands “threaten all nations operating” in the region, by which around $5 trillion (£4 trillion) of goods are shipped each year to destinations around the world.

He said: “The function of these islands is to extend the offensive capability of the People’s Republic of China beyond their mainland coasts.

“They can fly fighters, bombers, and all those offensive capabilities of missile systems.

“So that’s the threat that’s there, that’s why it’s so concerning about the militarization of these islands.

“They threaten all nations operating nearby and all international sea and air space.”

Admiral Acquilino reported at the time that during his visit, while aboard a US Navy reconnaissance aircraft which was flying near Chinese-held outposts in the Spratly Archipelago , China had issued warnings to “stay away” despite no legal obligation to do so.

Chinese official communications said over the plane’s intercom: “China has sovereignty over the Spratly Islands, as well as the surrounding sea areas. Walk away immediately to avoid misjudgments.

The Philippines, located just 100 miles from the Spratly archipelago, successfully claimed rights to the islands via an international tribunal in 2016, which then legally forced China to cease operations in the area.

But China claimed 90% of the South China Sea, based on a U-shaped nine-dash line drawn in the 1940s by a Chinese geographer, and has consistently refused to cede any territory in the area.

President Xi Jinping rejected the court’s result, saying it had no effect on China’s “territorial sovereignty and maritime rights”.

And although the US government has rejected almost all of China’s claims, there remains a patrol force that is unwilling to engage militarily and has no personal territory in the South China Sea.

Boris Johnson’s allies warn Tory rebels they risk Brexit, the Red Wall and the next election if they oust him

US does not want a strong government in Pakistan: Imran Khan – Pakistan