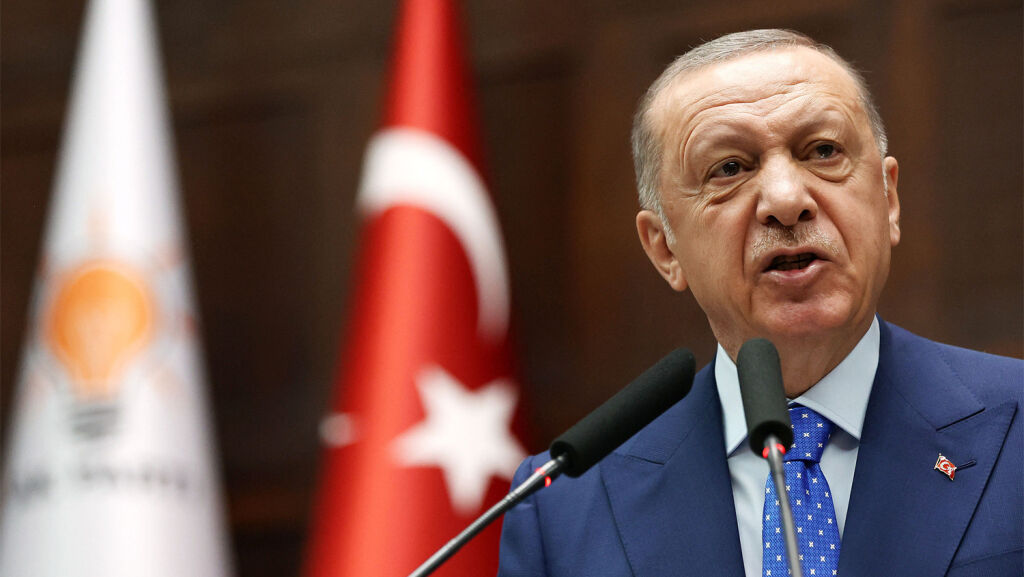 LLast month, Finland and Sweden announced their intention to join the North Atlantic Treaty Organization. Russia’s war in Ukraine frightened them enough to abandon neutrality. Major nato member states such as the United States and the United Kingdom offered their full support. Yet nearly a month later, Finland and Sweden are nowhere near joining.

The integration of two new Member States would obviously take time. It took over a year to North Macedonia, natos new member, to enter the alliance. But the demands of Finland and Sweden are blocked by a particularly thorny obstacle. And it’s a roadblock that doesn’t seem to be going away any time soon.

This roadblock is Turkey.

For a new country to enter nato, it needs the approval of the current 30 Member States. And Turkish President Recep Tayyip Erdoan has so far refused to endorse membership bids from Finland and Sweden. We are currently following the developments concerning Sweden and Finland, Erdoan saidbut we don’t feel positive about it.

What are the Ankara patterns?

One of Erdo’s main problems is Sweden’s alleged support for Kurdish terrorists. Turkey is waging a guerrilla war against the Kurdistan Workers’ Party (pkk). The pkk is a far-left organization recognized as a terrorist group by Turkey, the United States, the European Union (to which Sweden belongs) and other Western democracies. Sweden’s generous refugee policy enabled many Kurdish militia members to flee the Syrian civil war. Among these are members of the People’s Protection Forces (YPG), a Syrian pkk-affiliate who supported the West in the war against the Islamic State. The YPG claims he has ideological links with the pkk but no formal ties.

Part of the Swedish dilemma is that the current social democratic government does not have a majority in the Riksdag (Swedish parliament). He relies on several opposition parties and an independent to stay in power. The independent parliamentarian happens to be the former Kurdish guerrilla Amineh Kakabaveh. She threatens to cause problems for the government, such as rejecting the Social Democrats’ budget if Stockholm makes concessions to Ankara.

On the one hand, Swedish Prime Minister Magdalena Andersson needs Erdoan to give the Swedes the green light nato application. On the other hand, the longevity of his government depends on the graces of a Kurdish parliamentarian hostile to Turkey. For now, Andersson is siding with Kakabaveh. Andersson assured Kakabaveh that she would not compromise with Turkey over its nato offer, according to FinancialTimes. This was to ensure Kakabaveh’s support in the vote to dismiss Swedish Justice Minister Morgan Johansson.

It seems Erdoans is demanding to cut ties with the YPG will not be listened to.

Erdo’s other demands include severing ties with supporters of Fethullah Glen, an exiled Muslim preacher and political opponent blamed for Turkey’s failed 2016 coup. Glen currently lives in exile in the United States.

It could also be that Erdo’s true wishes have nothing to do with Sweden, but rather that he is waiting to be bought off with other trinkets of access to US weapons that he has been denied until now. present, for example.

Finland, on the other hand, is considered collateral damage in the negotiations. Erdoan focused his grievances more on Sweden. But both Stockholm and Helsinki nato candidacies are threatened until his demands are met.

Turkey is a unique country. It is partly in Europe and partly in Asia. Its Muslim heritage points to the east, but Istanbul’s history as one of the main cities of Christianity also points to the west of Turkey. For most of its modern history, Turkey has been a Western, secular, European democracy. In the 1950s, the Soviet Union was strong and directly bordered Turkey. Ankara was an obvious candidate for nato enlargement and joined in 1952.

It would be incorrect to claim that Turkey was not a contributing member of nato. It has the second largest active army of the alliances. But events like the feuds with Sweden and Finland show that Turkey’s allegiance to the West is limited. Even with a major European war in Turkey’s neighborhood, Ankara is unwilling to put aside its local ambitions to strengthen its alliance.

This is not the first time that Turkey has caused problems within nato. In 2019, Ankara had a run-in with the United States after buying a Russian missile system and was kicked out of a US F-35 fighter jet program. There is also the issue of US nuclear weapons in Turkey. Like other countries in Europe, the United States stores nuclear weapons in Turkey as a Cold War relic. These are officially under joint US-Turkish control. But how much control Washington actually has over these weapons is debatable.

For America, and nato in general, Turkey is an unreliable ally at best. At worst, it’s an impending betrayal.

The Trumpet bases its analysis of the news on Bible prophecy. And Bible prophecy has a lot to say about the turkeys’ relationship with America.

Psalm 83 describes an alliance of various peoples of the Middle East coming together to, as verse 4 says, cut [Israel] far from being a nation; so that the name of Israel will no longer be remembered. (The prophetic identity of Israel includes America; please request a free copy of The United States and Britain in prophecy, by Herbert W. Armstrong, for more.) Verse 5 specifically lists them as being confederated together.

Verses 6-8 show who belongs to the covenant: the tabernacles of Edom and the Ishmaelites; of Mab and the Hagarenes; Gebal, and Ammon, and Amalek; the Philistines with the inhabitants of Tyre; Assur also joined them.

Such an alliance has never been formed in history. This means that this psalm is prophetic. But the meaning is hidden unless one understands the modern descendants of these ancient people. Trumpet editor Gerald Flurrys free booklet The king of the south goes into the details of the modern identities of these peoples. For our purposes, let’s focus on one of the peoples mentioned: Edom.

The All the truth, our predecessor magazine, wrote the following in July 1957:

Esau, or Edom as he is also called, lived in southeast Palestine near Petra. Arab Bedouins now live there. So where did Esau’s children go?

Since the time of Nebuchadnezzar, who took them captive, they disappear for 1000 years of history. Then suddenly we find Amalek the name of a city of Turkestan in Central Asia (from Paul Hermans Seven parties and eight parties). The Egyptians called the Amalekites Love. In Turkestan is the river amu today! In biblical times, the Edomites inhabited Mount Seir (Genesis 32:3). In Turkestan is the river Syr Daryathe of Syr, or Seir.

The main Turkish tribe is the Ottoman. The prophecies referring to Edom or Esau mention Friend as the ruling tribe in these last days (Obdiah 9). The conclusion is inescapable. The Ottoman Turks are the sons of Theman. Only the vowels of the spelling have been modified during these last millennia. From Central Asia, the Turks, or Edomites, moved to Asia Minor. This is where the children of Esaus live today! Turkey controls the crossroads of nations the Dardanelles (Abdias 14).

As is clear, Esau, or Edom, is Turkey today!

Edom (Turkey) is part of the plot to cut America off from being a nation. The friction with nato today is a small harbinger of this Turkish double crossover to come.

It’s a relatively minor spat today. But Bible prophecy states that Turkey’s relationship with the West will take a much more dangerous turn in the near future. To learn more, please read our free reprint article Turkey: an act of revenge! Also request a free copy of The king of the south to learn what the Bible prophesies for the Middle East today.