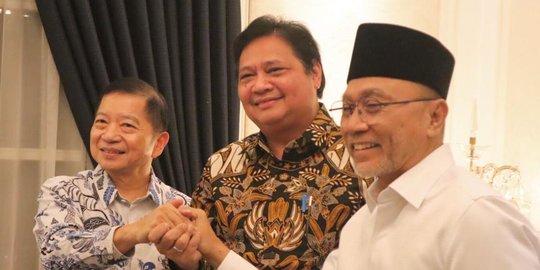 Merdeka.com – The National Mandate Party has officially joined the coalition Jokowi. This is after Zulkifli Hasan was appointed Minister of Commerce. PAN’s entry into the Cabinet began to be associated with President Joko Widodo’s influence in the United Indonesia Coalition. The KIB is a coalition formed by the Golkar Party, the PAN and the PPP.

With the arrival of Zulkifli Hasan in the cabinet, all the general chairmen of the KIB party occupied the seats of the Jokwoi cabinet. They are Airlangga Hartarto, Suharso Monoarfa and Zulkifli Hasan.

The President of Golkar, Airlangga Hartarto, is the Coordinating Minister of Economy. The leader of the PPP, Suharso Monoarfa, is the minister of the National Development Planning Agency. Everything is now directly under Jokowi’s command.

PAN’s entry into Jokowi’s cabinet as Jokowi’s code gave the green light for the formation of KIB. Jokowi would like to strengthen the composition of the United Indonesia Coalition (KIB) in the cabinet for 2024.

“The KIB cannot be separated from the ‘hands’ of the Palace,” said a merdeka.com source within the governing coalition upon confirmation.

According to source information, KIB is expected to provide tickets for Jokowi’s chosen presidential candidate. This signal was reinforced by Airlangga’s statement that it was open to bringing KIB executives out.

The total votes obtained by Golkar, PPP and PAN exceeded the presidential nomination threshold by 20%. Based on the 2019 election results of the KPU, Golkar won 85 seats with a percentage of 12.31%, the PAN won 44 seats or 6.84% and the PPP won 19 seats or 4.52%. The combined votes of the three parties reached 23.67%. This means that it is enough to carry out their own presidential candidate.

Merdeka.com contacted Minister of State Secretary Pratiko and Cabinet Secretary Pramono Anung to obtain this information. However, so far they have not returned our phone calls and texts.

Jokowi’s growing influence was endorsed by PPP vice-president Arsul Sani. He acknowledged that President Joko Widodo influenced the political landscape and made strides. Having three general presidents of the KIB in the cabinet will be an opportunity to get closer to Jokowi.

“Indeed, we cannot deny that, of course, the president will also influence our political landscape, that’s for sure,” Arsul told reporters.

Arsul said that the three general presidents of the government have access to government and state affairs. With this access, parties have the same opportunity to understand government issues to determine SMI steps. Including will benefit the presidential and vice-presidential candidates who will be carried by KIB.

If a general president is not in the cabinet, the understanding of the state will be remote.

KIB will also start adapting the vision and mission to Jokowi’s thinking. However, Arsul did not mention Jokowi’s influence in determining which presidential candidate KIB would carry.

“Adjusting means what is in the mind of the KIB parties on the government’s vision and mission in the future, yes, with input from the president, opinions, views of the current president,” Arsul said.

Political observer Ujang Komaruddin suspects Jokowi’s involvement in forming the KIB. Because, according to him, it is impossible for the president’s ministers to form a coalition without Jokowi’s knowledge and authorization. Jokowi is also facilitating political consolidation ahead of the 2024 presidential election with the existence of the KIB.

“It wants to emphasize that KIB is part of Jokowi’s formation,” he said.

“We need a certain cawapres candidate, we even need to find the presidential candidate’s boat,” Ujang said.

On the other hand, it is believed that the formation of the KIB axis will excite the other parties in the Jokowi coalition. Indeed, the emergence of the KIB creates a polarization within the coalition. As a result, the parties will be busy maneuvering to find friends.

Adi has a different point of view. Although it is recognized that Jokowi’s power in KIB is great, he feels that PAN, PPP and Golkar are not easy to step in as they have enough votes to promote their own champions.

“It means that even if KIB is associated with the political lifeboat of the president, for example, with the assumption that Ganjar will be taken away, it is not certain. If you look at Airlangga’s statement,” Adi said.

PAN Vice President Yandri Susanto also denied that Jokowi’s involvement in the KIB increased after Zulhas joined the cabinet. Yandri pointed out that the PAN had said it had supported Jokowi’s government since August 2021. Meanwhile, he said, the KIB was only formed a month ago.

“So it’s a year away from the PAN national working meeting, Jokowi joined Pak Jokowi while KIB was only a month ago,” Yandri said.

Even so, Yandri did not deny that KIB may contact Jokowi to discuss the 2024 presidential candidate. Jokowi’s input is considered important for KIB to formulate the best candidate for future leaders.

“The point is, the more we ask, the more we respond to aspirations, the better it is for national leadership,” he said.

Read also :
Chairman of the PAN as minister, Jokowi is seen as wanting to strengthen the KIB ahead of the 2024 general elections
Jokowi’s Blessing Signal for KIB
PPP: President Jokowi influences the political approaches of the KIB
PPP: the reshuffle strengthens the position of KIB, three Ketum are in the Cabinet
Suharso: In the near future there will be a party to join KIB

Kate Middleton stuns in a polka dot dress as she and Prince William lead the Royals at Ascot while Queen, 96, stays home