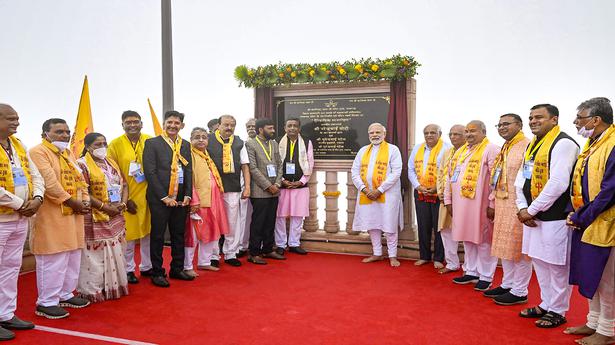 The temple is managed by a trust headed by the treasurer and leader of Gujarat BJP, Surendra Patel.

The temple is managed by a trust headed by the treasurer and leader of Gujarat BJP, Surendra Patel.

Claiming that India is now enjoying a cultural independence that began with Sardar Patel’s post-independence renovation of Somnath Temple, Prime Minister Modi unfurled a flag on Saturday after the inauguration of a renovated Mahakali temple that has apparently was destroyed by the 15th century ruler of Gujarat, Mahmud Begda.

For five centuries and 75 years of independence, there was no dhwaja on top of the Mahakali temple. Today, the flag is unfurled again over the temple. This flag is not only a symbol of our faith and spirituality, but it shows that centuries change, eras pass, but our faith remains eternal and strong, Modi told a small gathering on Pavagadh hill in central Gujarat.

The 11th century temple was remodeled with a new spire and flag atop after a dargah or shrine that stood atop the temple for nearly 500 years was moved with the consent of its guardians.

The temple is managed by a trust headed by the treasurer and leader of Gujarat BJP, Surendra Patel. The temple trust released an announcement in the local media on Saturday which said that after being destroyed by Mohmad Begda 500 years ago, the summit temple and Dhwaja will be restored today.

According to the details, the temple was destroyed by the 15th century ruler of Gujarat, Sultan Mahmud Begda (1458 to 1511), who set up his capital at Champaner near Pavagadh after defeating the Rajput rulers. Begda was the most prominent ruler of the Sultanate of Gujarat and had earned the title of Begda, after conquering two main forts of Gujarat: Junagadh and Pavagadh.

It is said that during the reign of Begdas; a shrine or Sadanshah Pir Dargah was built after the temple spire was destroyed. Now the shrine has been amicably moved, paving the way for the redevelopment of the temple with a spire and flag atop.

In his address, Mr. Modi, without mentioning the controversial history of the temples, said that the country is witnessing the restoration of India’s cultural and spiritual glory as a grand temple of Lord Rama is being built in Ayodhya while Kashi Vishwanath temple has already been built. The Prime Minister also touched on the redevelopment of Kedarnath in Uttarakhand.

Our centers of faith and spiritual glory in India are restored. The reconstruction of the Mahakali temple in Pavagadh is part of the same gaurav yatrasaid the Prime Minister in his address.

In fact, neither the state government nor the temple trust has made any statement regarding the relocation of the shrine to pave the way for the restoration of the ancient temple on the hills.

The Prime Minister, however, said that in the glorious tradition of Somnath, Pavagadh temple was redeveloped meaning that like Somnath located on the coast of Saurashtra region, which is said to have been plundered and demolished by Mahmud of Ghazni and restored after independence by Sardar Patel, Pavagadh temple has been restored now after 75 years of independence.

Champaner was briefly the capital of the Sultanate of Gujarat after Mahmud Begda won the hill fortress of Pavagadh. Today, Champaner Pavagadh Archaeological Park is a UNESCO World Heritage Site and home to some of the iconic monuments and architectural marvels.

The Archaeological Park is a treasure trove of monuments and palaces, gateways and arches, mosques, tombs and temples, residential complexes, water facilities such as stepweels; and chariots dating from the 8th to 14th centuries.

During his reign, Sultan Begda built a magnificent Jama Masjid at Champaner, which ranks among the finest architectural edifices in Gujarat. It is an imposing structure on a high plinth with a central dome, two 30-meter-high minarets, 172 pillars, seven mihrabs, and carved entrance doors with slender latticed windows called jalis.

Does Nick Kyrgios play at Wimbledon? Updates on the Australian tennis star’s status