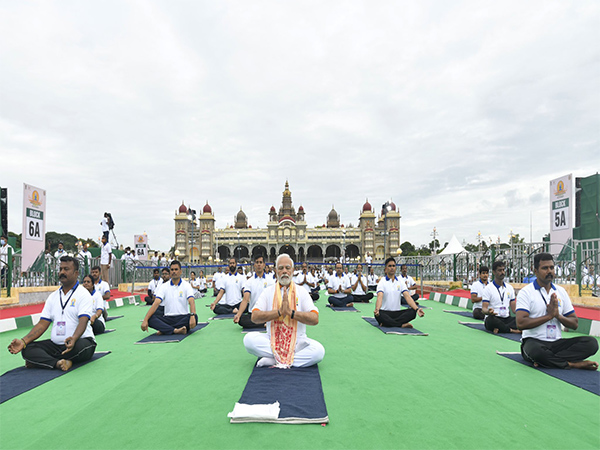 The Prime Minister remarked that India celebrates Yoga Day at a time when the country is celebrating its 75th anniversary of independence, “Amrit Mahotsav”. This widespread acceptance of Yoga Day is acceptance of that “Amrit spirit of India which has energized India’s freedom struggle”. Mass yoga demonstrations are held at 75 iconic locations across the country that have witnessed India’s glorious history and been the center of cultural energy.
“Experiencing group yoga at historic sites in India is like linking India’s past, India’s diversity and India’s expansion,” he explained. .

He also talked about the new Guardian Yoga Ring program, which is a collaborative exercise between 79 countries and United Nations organizations as well as Indian missions abroad to exemplify the unifying power of yoga that transcends national borders.

As the sun seemingly moves east to west across the world, mass yoga demonstrations in participating countries, viewed from any point on Earth, will appear to be taking place one after another, almost in tandem, thus emphasizing the concept of “one sun, one earth”. “These yoga practices are a wonderful inspiration for health, balance and cooperation,” he added.

On Tuesday, the Prime Minister practiced yoga at the main event of the eighth International Yoga Day in the heritage town of Mysuru in Karnataka.

More than 15,000 people took part in the yoga celebrations with the Prime Minister at the grounds of Mysore Palace.

The prime minister said the yogic energy, which has been nurtured for centuries by India’s spiritual centers like Mysuru, is now giving direction to global health. Today, yoga becomes a basis for global cooperation and gives humanity the belief in healthy living, he added.

“Yoga has now become a global festival. Yoga is not just for any individual, but for all of humanity. Therefore, this time the theme for International Yoga Day is – Yoga for the World. humanity,” Prime Minister Modi said. He thanked the United Nations and all countries for bringing this theme to the world level.

Governor of Karnataka Thaawarchand Gehlot, Chief Minister of Karnataka Basavaraj Bommai, Union Minister for Ayush Sarbananda Sonowal, officials from Ministry of Ayush and Government of Karnataka and other dignitaries practiced yoga during the event.

He said that yoga is not just for any individual but for all of humanity.

“No matter how stressed we are, a few minutes of meditation provides relaxation and increases our productivity. Therefore, we should not consider yoga as extra work. We must know yoga. We must live yoga. The Yoga is not just a part of life for us today, but is now becoming the way of life,” he said.

Prime Minister Modi stressed that the eternal journey of yoga will continue in the direction of an “eternal future”.

“We will also accelerate a healthy and peaceful world through yoga with the spirit of ‘Sarve Bhavantu Sukhinah, Sarve Santu Niramaya’,” he said.

The Prime Minister further said, “The yogic energy, which has been nurtured for centuries in India’s spiritual centers like Mysuru, is today giving direction to global health. Today, yoga is becoming a mutual basis for global cooperation. Today, yoga offers confidence in healthy living to mankind.”
This year, the theme of the celebration is “yoga for humanity”.

The Prime Minister’s yoga program in Mysuru is also part of the new “Guardian Yoga Ring” program, which is a collaborative exercise between 79 countries and United Nations organizations as well as Indian missions abroad to exemplify the unifying power yoga that crosses national borders.

As the sun seemingly moves east to west across the world, mass yoga demonstrations in participating countries, viewed from any point on Earth, will appear to be taking place one after another, almost in tandem, thus emphasizing the concept of “one sun, one earth”.

Keeping with the overall theme of 75 years of Indian Independence, the Ayush Ministry has also identified 75 venues where Union Ministers will participate in the celebration of Yoga Day.

This year, International Yoga Day 2022 was marked by many firsts, including the “Guardian ring”, a demonstration of yoga by Union cabinet ministers in 75 iconic locations in India and a special digital yoga exhibition and static at Mysuru Dussera Grounds, Mysuru.

The digital yoga exhibition showcased the latest technologies like Virtual Reality (VR) to project the history and wisdom of yoga. The static display consists of 146 stalls which have been taken over by yoga institutions, Ayush institutions under the supervision of the government of Karnataka and the government of India.

According to Ayush’s ministry, up to 25 million people are expected to take part in the 2022 International Yoga Day celebrations across the globe.

Earlier, Yog Guru Ramdev practiced yoga at Patanjali Yogpeeth in Haridwar. Many children and other people also attend the event.

It was during his address to the United Nations General Assembly on September 27, 2014 that Prime Minister Narendra Modi first floated the idea of ​​International Yoga Day.

The draft resolution adopted by India was supported by 177 nations. With the universal recognition and growing popularity of yoga, the United Nations declared June 21 as International Yoga Day on December 11, 2014.

The first International Yoga Day was celebrated on June 21, 2015.

A History of Men’s Makeup in 6 Fascinating Looks