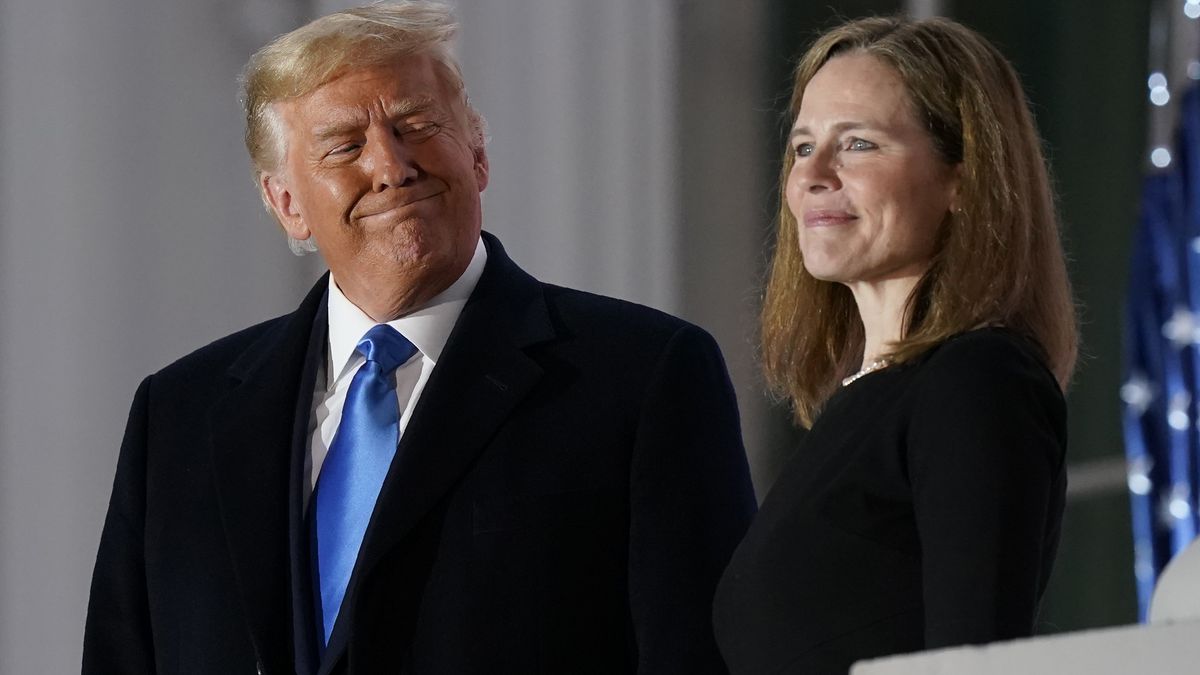 WASHINGTON (AP) President Joe Biden rarely mentions his predecessor by name. But as he spoke to a nation dealing with seismic change in women’s rights, he could not ignore the legacy of Donald Trump.

It was three judges appointed by a President Donald Trump who were at the heart of today’s decision to tip the scales of justice and eliminate a fundamental right of women in this country, Biden said Friday after the Conservative majority on the Supreme Court voted to overturn Roe v. Wade. , the landmark 1973 decision that provided constitutional protections to women seeking abortions.

The abortion decision marked the culmination in a week that cemented the former president’s continued impact in Washington more than a year and a half after leaving the White House.

A court that includes three Trump-appointed conservatives also decided to ease restrictions on gun ownership. And across the street at the Capitol, which was ravaged by a mob of Trump supporters in the final days of his presidency in 2021, new details have surfaced of his flagrant violations of Democratic norms. The Houses Jan. 6 committee used a public hearing last week to highlight the intense pressure Trump has exerted on senior Justice Department officials to void the 2020 election, as well as discussions of blanket pardons for cooperative members of Congress.

The developments were reminiscent of the clumsy political bargain that social conservatives embraced to achieve their greatest ambitions. In refusing to consider Barack Obama’s Supreme Court nominee in the final year of his presidency, then-Senate Majority Leader Mitch McConnell, R-Ky., assured that the next president would be able to leave his mark on the court. As Trump pledged to transform the Supreme Court’s ideological leanings – even providing a list of justices he would choose from among reluctant conservative Republicans and evangelical Christians rallied behind Trump, a thrice-married man who s was previously described as very pro-choice.

When he ran in 2016, he promised to appoint conservative and pro-life justices to federal courts, starting with the US Supreme Court. And he kept his word, said Ralph Reed, an evangelical leader and president of the Faith and Freedom Coalition, who has come under fire in some corners for his endorsement of Trump. Members of the religious community who felt it was worth taking a chance on Donald Trump in 2016 have been vindicated.

The GOP is now at a turning point in its relationship with a man who fundamentally transformed the party with his populist agenda, Make America Great Again and his fight against the establishment Republicans who controlled the party. There is growing debate within the party over whether Trump’s resonance is beginning to fade as he lays the groundwork for a third presidential election in 2024.

Other leading Republicans, including former Vice President Mike Pence and former Trump Secretary of State Mike Pompeo, are taking increasingly bold steps for their own White House bids. And many Trump supporters are eagerly embracing Florida Governor Ron DeSantis as Trump’s natural successor as they look to the future.

Well, deliver the latest news and information you need every weekday morning.

Pence, Pompeo and DeSantis are among those who have made it clear that a Trump candidacy will not influence their own decisions about whether to run. If they run, they will all be vying for support from the same conservatives who fueled Trump’s rise.

Trump himself seems somewhat uncertain about how to handle the political fallout from the past week, particularly the abortion decision. He privately expressed concerns to his aides that the decision could energize Democrats ahead of the November election, The New York Times first reported.

Indeed, in a Fox News interview after the abortion advisory was released, Trump said that ultimately it’s something that will work for everyone.

Asked about his own role in the final decision, Trump replied that it was God who made the decision.

Trump grew more emboldened as Friday unfolded, raising funds on the decision and releasing a statement in which he took full credit for what he called the biggest WIN for LIFE in a year. generation.

He said that this decision and other decisions that have been announced recently were only made possible because I delivered everything as promised, including the appointment and confirmation of three highly respected and strong Constitutionalists to the Court. Supreme of the United States. It was my great honor to do so!

At a rally Saturday night, Trump took another lap of honor to cheers from the crowd.

While Democrats hope the decision will galvanize its voters ahead of November’s midterm elections, Michael Caputo, a former Trump campaign and White House adviser, argued that the decision would be beneficial for future political prospects. of Trump, helping to cement his standing with conservative voters if he runs again.

President Trump took his share of the credit for the Trump courts’ decision, as he should, Caputo said. This is further confirmation of his transformational presidency. Suburban Republican angst is a progressive myth; true suburban Republicans know their rhetoric is performative: this ruling simply shifts the abortion issue back to the states where it has always belonged.

Meanwhile, the Jan. 6 committee and related investigations, including a special grand jury in Fulton County, Georgia, examining whether Trump and others unlawfully interfered in the 2020 election, continue to loom.

As the committee held a series of public hearings, few Republicans have emerged to defend Trump’s actions, which have increasingly drawn comparisons to President Richard Nixon’s actions during the Watergate scandal 50 years ago. year.

Last week, the committee showed how a defeated Trump tried to use the Justice Department for his own political ends, the same way Nixon fired his top brass in the Saturday night massacre before he resigned.

John Dean, who served as Nixon’s White House attorney and testified against Nixon in scandal hearings, said watching the three Trump-era Justice Department officials recount how Trump had them pushed to investigate baseless allegations and threaten mass resignations had brought him back to conversations he had had with Nixon.

I retreated and remembered my March 21 cancer during the presidency conversation with Nixon where I kept pushing and compounding the issues. And he had clearly made his decision, he said. Nothing I could say seemed to pass.

Find out how an abortion ban could change the lives of women in Florida.

Abortion drugs are legal in Florida. But for how much longer?

Will Florida Republicans Ban Abortion? Here’s what we know.

COMMIT: Alabama Football Makes the 6A Mr. Football on from Mississippi for 2023