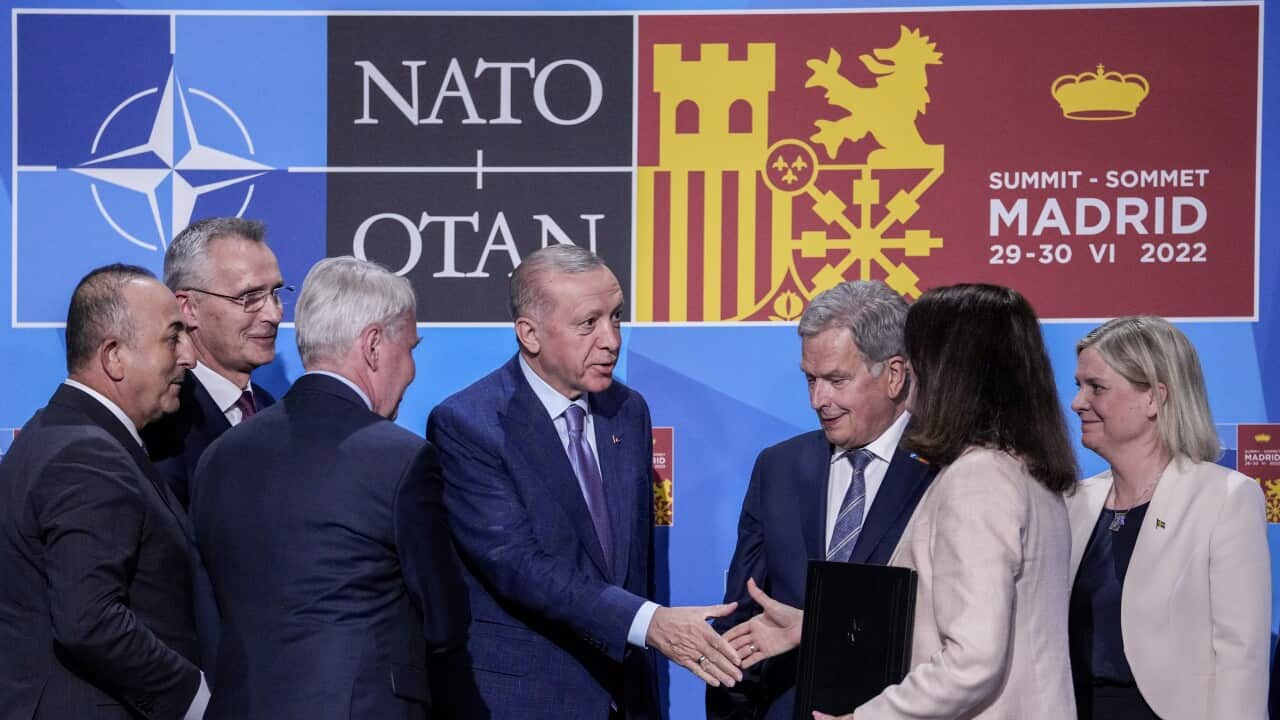 Turkish President Recep Tayyip Erdogan has lifted his opposition to Sweden and Finland joining NATO following close talks with the leaders of the two Nordic countries in Madrid.
Mr Erdogan had stubbornly refused to give the green light to the candidacies of the Nordic couple – submitted in response to Russia’s war against Ukraine – despite calls from his NATO allies to pave the way for their entry.

But on Tuesday night, the president’s office said it had agreed to support their efforts to join, saying Ankara had “got what it wanted”.

“Turkey has made significant progress in the fight against terrorist organizations,” the office said ahead of a NATO summit in Madrid.

Swedish Prime Minister Magdalena Andersson hailed a “very good deal” with Turkey to support NATO memberships, saying the move would strengthen the alliance.
“Taking the next step towards full NATO membership is of course important for Sweden and Finland. But it is also a very important step for NATO, because our countries will be security providers. within NATO,” said Ms Andersson.

Ms Andersson rejected claims that she conceded too much to Mr Erdogan in order to convince him to drop his membership veto in Stockholm.

“I think it’s a deal I can fully support,” she said after lengthy talks in Madrid with Erdogan and his Swedish counterpart.
Ms Andersson said she was able to brief the Turkish leader on changes to Sweden’s terrorism legislation which are due to come into force next month.

“And of course we will continue our fight against terrorism and as members of NATO we will also do so by cooperating more closely with Turkey,” the Swedish prime minister said.

Australian Prime Minister Anthony Albanese has declared Australia’s support for Ukraine, saying Russian President Vladimir Putin’s “unlawful war of aggression” must end.
The civilian death toll continues to rise in Ukraine, with missile strikes in Kyiv and Kremenchuk prompting war crimes charges. The Russian government continues to claim that it does not target civilians with its military strikes.

Calling the two missile strikes on a Kremenchuk shopping center on Monday “abominable”, Mr Albanese said leaders attending the NATO summit in Madrid would consider further collective action.
“That’s one of the reasons I’m here at NATO…the world is watching what’s happening and collectively condemning it.”

NATO Secretary General Jens Stoltenberg has already announced a more than sevenfold increase in the number of troops placed on high alert to more than 300,000.

Mr Stoltenberg called the move “the greatest overhaul of our collective defense and deterrence since the Cold War”.

It comes as Britain’s new army chief has invoked the fight against Nazi Germany in his call for increased mobilization by NATO countries to deal with the threat posed by Russia.
“This is our moment of 1937,” Patrick Sanders told an audience at the Royal United Services Institute (RUSI) military think tank.

“We are not at war. We must act quickly so as not to be dragged into a war by failure to contain territorial expansion.”

He urged leaders at the NATO summit to act to stop Russian aggression before it spreads beyond Ukraine, posing “an even greater threat to European security after Ukraine than it was before”.
“The Russian invasion reminded us of that age-old maxim that if you want to avoid conflict, you better be ready to fight,” he said.

Supporting the position of heavily arming Ukraine to respond to Russia, he said the British military would mobilize over the next few years “to help prevent war in Europe by being ready to fight and win at alongside our NATO allies”.

Australia plans to reopen its embassy in Kyiv

Mr Albanese said he wanted to expand Australia’s diplomatic presence in Ukraine by reopening the Australian Embassy in Kyiv after staff were evacuated in early February ahead of Mr Putin’s invasion.

A temporary office has been set up in Lviv with officials also working from Poland to help Australians fleeing the fighting.

In addition, he said he would consider options for a continued “on the ground” presence in Ukraine in the coming weeks.
“This is one of the issues that has been looked at over the past few days and weeks. And we will continue to do so,” Mr Albanese said.

He said he was still considering an invitation from Ukrainian President Volodymyr Zelenskyy to visit Kyiv.

The way is clear to resume trade negotiations with the EU

Later this week, he is due to travel to Paris at the invitation of French President Emmanuel Macron.

He said the abandoned submarine deal with the French naval group and the earlier stance on climate change had hampered trade talks with the EU.

“It was clear there were two hurdles…one was Australia’s relationship with France and the rift that had happened of late given France’s leading role in Europe,” he said. he declares.
“The second was Australia’s position on climate change, hence the perception by Europe and even the world, that Australia was a drag on global action.
“Australia just wasn’t seen as being fair dinkum about climate change action.”
Mr Albanese said he hoped to see an “acceleration” underway over the next few months, with a number of EU trade ministers due to travel to Canberra for talks.

“Go work on your craft, weirdo”