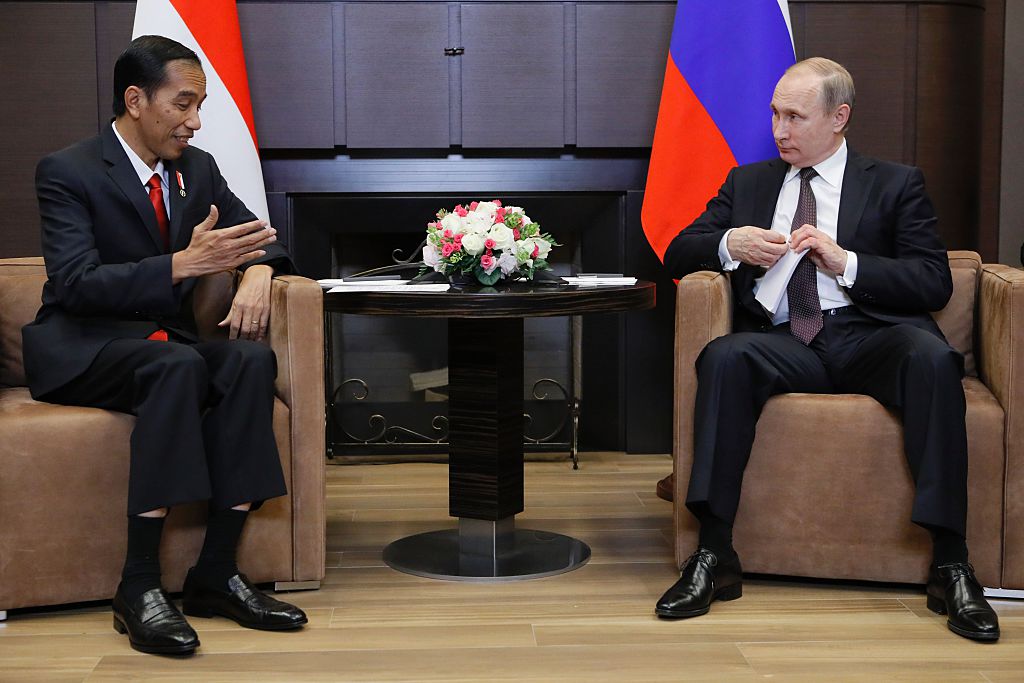 Embarking on a peace mission in Russia and Ukraine after attending the G7 summit in Germany, Indonesian President Joko Widodo will follow closely and with, at best, no more chance of ending the war of Vladimir Putin than those who have tried to do so. far.

A generous interpretation of the mission would define it as an example of the independent and active foreign policy dear to Indonesia. Jakarta never tired of repeating the independent or non-aligned part of this phrase from the moment the Russian troops began their brutal rampage.

It was in this self-proclaimed spirit of impartiality that Jakarta framed its initial formal response to the invasion, which deliberately avoided naming the invader and called on both sides to seek a peaceful solution through diplomacy, as if the two sides were somehow equally determined to war. It was also inherent in the abstention of Indonesians (like India, Brazil and 55 other states) in a UN vote to suspend Russia from the Human Rights Council, contrary to a majority of more than 90 member states that ensured Moscow’s ejection from the body.

Visiting the two warring capitals, however, could be said to correspond to the active part of the doctrine, as enunciated by one of the founders of modern Indonesia, Mohammad Hatta. The country’s first vice-president, Hatta, said that the foreign policy of the early republics was built with the aim of strengthening and maintaining peace, and to this end, Indonesia will work vigorously through sustained efforts if possible. by the majority of the members of the United Nations.

Widodo himself seemed to invoke the spirit (if not the name) of Hatta in explaining the purpose of his mission before leaving for Europe. I am going to Ukraine, he said, with the aim of inviting the President of Ukraine, President [Volodymyr] Zelensky, to open up opportunities for dialogue within the framework of peace.

He intended to achieve the same goal during his trip to Moscow. He would replicate his overture to Zelensky by also inviting Putin to open a dialogue with his Ukrainian counterpart and conclude a truce as soon as possible and end the war.

Widodo was obviously just as determined to remind the G7 nations of the need for peace. We will encourage and invite the G7 countries to work together to negotiate peace in Ukraine, he said, and also to find an urgent solution to deal with the food and energy crisis that is engulfing the world.

A generous soul might also think that Widodo believes his mission has a chance of succeeding and give him credit for trying. And many Indonesians must have generous souls, judging by media commentary.

By praising Widodo for the initiative, a notable Indonesian foreign policy commentator has, for example, argued that rather than seek to end the conflict, he should press for a ceasefire, since Indonesia lacked the resources and presence in the region to broker a resolution. Widodos’ intervention would help save face for Russia and give Ukraine a chance to avoid another humanitarian tragedy.

More critical observers, however, would see it all as a chimerical gift at best, as rubbish at worst.

Zelensky is probably among them, however courteous his welcome. A leader who has understandably focused on receiving tangible support for his country’s defense rather than platitudes about peace, Zelensky probably struggles to see the point of visiting his Indonesian counterparts, at least as far as the interests of Ukraine are concerned.

Widodo represents, after all, a country that resisted the imposition of sanctions against the Ukrainian attacker and whose public comments, as reported by the Ukrainian Embassy in Jakarta, have tended to swallow the Russian lie that the main cause of the war was the alleged provocation of Ukraine and NATO. And Widodos’ line that he would urge his two interlocutors to seek dialogue would likely strike a man struggling to ward off hundreds of thousands of invaders bent on destroying his country’s independence as a maddeningly false equivalence. And he’s right.

The kindest assessment of Widodos’ visit to the Kremlin is that it’s naïve and misguided if he really thinks he can even broker a ceasefire, let alone dialogue. However impartial Widodo may be in his approach, he actually serves Russia’s interests far more than those of Ukraine. Putin will not pay notice to Widodos appeal. Instead, he will exploit the visit for his own propaganda purposes. Expect photos of the two beaming presidents shaking hands.

A more compelling explanation of Widodos’ mission than the pursuit of peace is Indonesia and self-interest. Widodos’ aspiration to host a successful G20, and thus showcase post-Covid Indonesia and Bali, is one element of this.

Comments from German Chancellor Olaf Scholz and President of the European Commission Ursula von der Leyen at the G7 suggest that a European boycott of the G20 summit in Bali in response to Putin’s participation now seems less likely than before. Scholz insisted, for example, that Germany did not want to torpedo the G20.

But Widodo would like to remove any risk by consolidating the original compromise touted by US President Joe Biden and now offered by Widodo himself to have Zelensky attend the summit as a special guest. Presumably, this re-invitation will be the first of Widodos’ talking points at the Kyiv meeting.

Widodos’ main focus in Moscow, however, is likely to be an end to Russia’s effective blockade of Ukraine’s grain exports, which he cast in an unaligned mold as a measure that would help alleviate the hardships that many in developing countries are experiencing due to war.

No one would benefit more than their own country. Indonesia is the largest wheat importer in the world (by dollar value) and 25% of its imports came from Ukraine in 2021. Ukraine was Indonesia leading wheat supplier in 2020.

The grain is used to make noodles, which have become a popular and relatively inexpensive staple food for many millions of Indonesians. But shortages of wheat and wheat flour have hurt consumers and producers alike, drastically reducing the production of wheat-based foodstuffs and cause price inflation. The Widodos administration faced widespread protests over a similar price spike in world cooking oil prices resulting from war-related shortages of the commodity, prompting a short-lived export ban on the oil. of Indonesian palm and, recently, the dismissal of the Indonesian Minister of Trade.

The longer the war drags on and the resulting disruptions to Ukraine’s wheat and sunflower oil exports persist, the greater the risk of soaring food prices, which have always presaged political unrest in the archipelago. , is high.

Street protests against inflated food prices would probably be the last thing Widodo would want as he anxiously awaits the arrival of his G20 guests in Bali. But by going both to the capital of the source of these imports and to the lair of the one blocking them, he can at least tell his citizens that he has done everything in his power to alleviate their burden.

For some, therefore, Widodos’ mission to Moscow may well evoke memories of Hatta’s idealism as he forged an admirable new identity for a nation and people hitherto victims of Western colonialism during the tensions of the cold War.

But for others, it’s at least as much noodles.