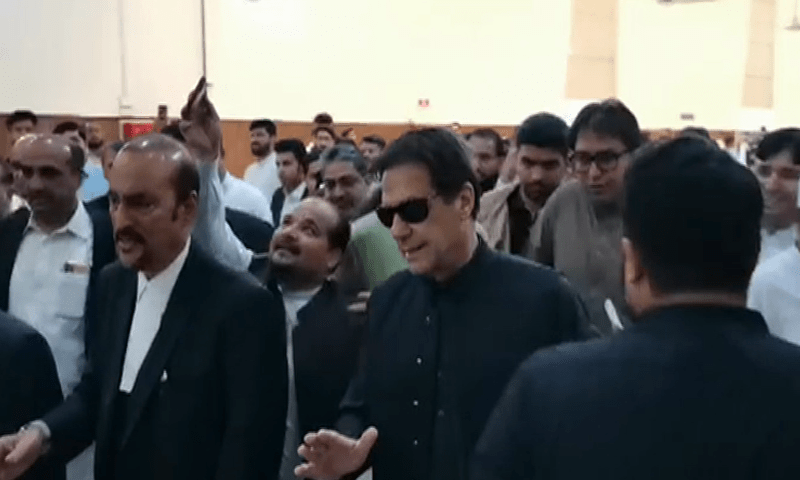 An Islamabad District and Sessions Court on Thursday extended PTI Chairman Imran Khan’s bail until July 30 in 11 cases involving allegations of violence and damage to public property during the ‘Azadi March’ celebrations. “May 25.

The ex-PM had applied for bail before arrest in FIRs registered against him at Aabpara, I-9, Kohsar, Karachi Company, Golra, Tarnol and Federal Capital Secretariat Police Stations before Judge Kamran Basharat Mufti District and Sessions (West) Search.

To this, the judge said it was important for Imran to appear in court.

He added that it was mandatory for him to appear in case 425 registered at the Kohsar police station, in which the former prime minister was charged with treason.

“A new bond must be issued in this FIR and I will only pass the orders when the accused appears in court,” the judge stressed.

To this, Imran’s lawyer assured the judge that his client would appear at the next hearing which was later set for July 30.

On May 26, a First Information Report (FIR) was filed at 1:50 a.m. at Kohsar Police Station upon complaint by Sub-Inspector (SI) Asif Raza under Sections 109 (Incitement), 148 (Armed Riot of a deadly weapon), 149 (unlawful assembly), 186 (obstructing public service), 188 (disobedience), 353 (assaulting an official), 427 (causing damage) and 435 (mischief by fire or explosive substance in intent to cause harm) of the Pakistan Penal Code.

SI Raza in the FIR said he was on duty with other police personnel at the China Chowk on Jinnah Avenue when at 11 p.m. 100 to 150 people carrying PTI flags marched suddenly directed to Express Chowk. He said the police tried to arrest the PTI supporters due to the imposition of Section 144 in Islamabad, but they did not listen and instead threw stones at the officers and set fire to buildings. trees.

Raza said 36 people, who were acting “at the behest of Imran and other PTI leaders”, were “subdued”.

Meanwhile, the second FIR was recorded at 03:20 on the complaint of SI Ghulam Sarwar under the same sections as the previous FIR. Sarwar claimed that he and other police officers were on duty at Express Chowk when at 12:30 a.m., 100 to 150 PTI protesters allegedly equipped with flammable rods and materials “chanted slogans, incited people, and set trees and subway station” near Geo Chowk, while smashing the windows of the Geo News office.

SI Sarwar alleged that when the police tried to disperse the crowd, the PTI workers resorted to throwing stones and also damaged a government bus. He added that 39 people were subsequently arrested.

Meanwhile, on May 28, a report by Dawn revealed that another 11 cases had been registered against PTI leaders, including Imran, and other PTI activists under different sections of the PPC by Loi Bher, the police of the Secretariat, Aabapra Police, Golra Police, Bhara Kahu Police, Tarnol Police and Koral Police among others.

Imran Khan’s march for true freedom “haqeeqi azadi” was preceded by the authorities’ invocation of Article 144, a measure used to curb gatherings. Maritime containers have been set up on the main roads to block their way.

Undeterred by the movements, the marchers, who tried to force the containers into Islamabad, were met with tear gas as police tried to disperse them. The police also charged them with batons.

Television images showed smoke rising from the ground and fires in green belts adjacent to major roads in Islamabad. The government claimed that PTI supporters started the fires while the PTI camp claimed that the fires were the result of police shelling. Neither claim could be independently verified.