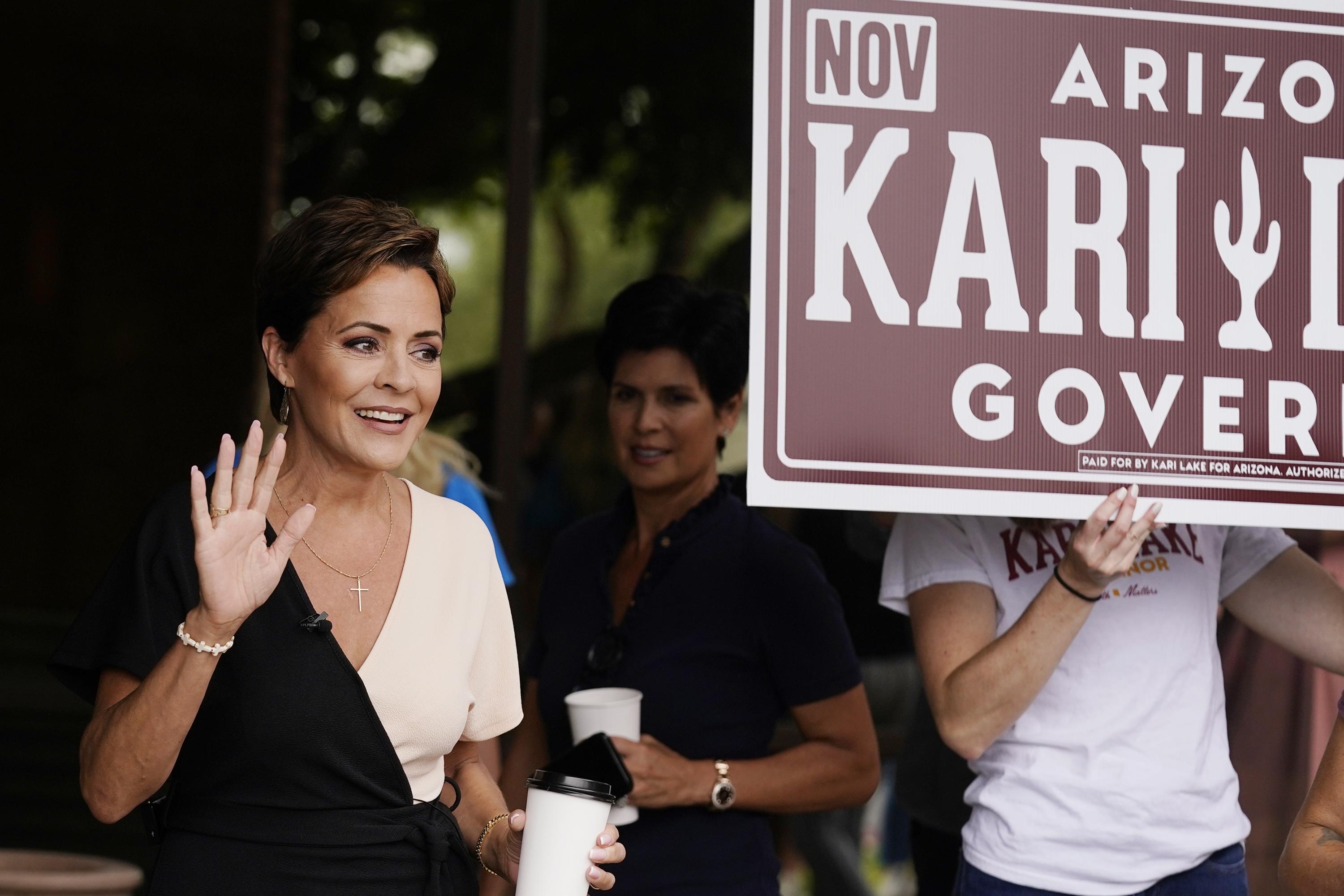 PHOENIX (AP) Kari Lake, a former news anchor who quit her journalism career and was embraced by Donald Trump and his staunch supporters, won the Republican primary for governor in Arizona on Thursday.

Lakes’ victory was a blow to the GOP establishment, which has lined up behind lawyer and businesswoman Karrin Taylor Robson in an effort to push their party past the chaotic era of Trump. Lake said she would not certify President Joe Bidens’ victory in 2020 and placed false allegations of voter fraud at the center of her campaign.

Arizonans who have been overlooked by the establishment have just caused a political earthquake, Lake said in a statement after the race was called.

Republicans are now entering the general election sprint with a slate of candidates closely allied with Trump who deny that Biden was legitimately elected president. Lake will face Democratic Secretary of State Katie Hobbs in the November election.

This gubernatorial race is not about Democrats or Republicans. It’s a choice between sanity and chaos, Hobbs said Thursday night in a statement on the Lakes victory.

Early election results showing only mail-in ballots received before Election Day gave Robson a solid lead, but that was reduced as votes from polling places were added to the tally. The Lakes victory became clear Thursday when Maricopa County released the results of thousands of mail-in ballots cast at the polls Tuesday.

Arizona voters have spoken, Robson said in a conceding statement to Lake Thursday night. I accept the results, I trust the process and the people who administer it.

In a midterm primary season with mixed results for Trump’s favorite candidates, the former president came out on top in Arizona, a state that was central to his effort to overturn the presidential election in 2020 and cast doubt on Bidens’ victory. In addition to Lake, Trump’s picks for the U.S. Senate, Secretary of State, Attorney General, U.S. House and state legislature have all won their GOP primaries.

If they win in November, Trump’s allies will dominate the election administration in a crucial battleground state as he eyes another White House bid in 2024. The results also show Trump remains a powerful figure of the GOP as longtime stalwarts of the party. are becoming increasingly bold in their efforts to regain control ahead of the next presidential campaign.

Robson, who is married to one of Arizona’s wealthiest men, has largely self-funded her campaign. She called the 2020 election unfair, but refrained from calling it fraudulent and urged the GOP to look to the future.

Lake now faces the daunting task of uniting the Republican Party after a deadly primary. On Wednesday, as Lake declared victory prematurely, she tried to reach out to Robson and others she fiercely criticized as RINOs, or Republicans in name only, who don’t align themselves with Trump on key questions.

Frankly, this party needs her to come together, and I welcome her, Lake said of Robson. And I hope she comes for that.

Robson said she has spent her life supporting Republicans, and hopefully our Republican candidates will be successful in November.

Like Trump, Lake courts controversy and confrontation. She berates reporters and dodges questions. She burned masks during the COVID-19 outbreak in the summer of 2021 and attacked Republicans like Ducey who allowed restrictions on businesses, although as a news anchor she encouraged people to follow public health advice.

Lake spent the days leading up to her own election claiming there were signs of fraud, but she refused to provide any evidence. With her victory secured, she said voters should believe her victory is legitimate.

We beat fraud, Lake said. She pointed to problems in Pinal County, which was running out of ballots in some precincts and needed to print more, but she and her attorney, Tim La Sota, refused to provide evidence to support her allegations of fraud.

She said she has no plans to stop talking about voter fraud even if she were to broaden her appeal beyond the loyalists she propelled in her main victory.

Federal and state election officials and Trump’s own attorney general said there was no credible evidence the 2020 election was tainted. Trump’s fraud allegations have also been flatly dismissed by the courts, including by the judges he has appointed. A manual recount conducted by Trump supporters in Maricopa County, Arizona’s largest, found no evidence of a stolen election and concluded that Bidens’ margin of victory was greater than the official tally.

Hobbs, Lakes’ opponent in November, sued the candidate for her opposition to abortion rights and gun control and a proposal she floated to install cameras in every classroom to keep tabs on teachers.

Republicans, heading into November as a divided party in Arizona, must appeal to independent voters who decide the close races, said Chuck Coughlin, a longtime Republican strategist who left the party during the Trump era.

I see it as a challenge Republicans are going to have: How do they relate to unaffiliated voters? said Coughlin.

Do you use Google Chrome? Get this critical update that patches 27 flaws