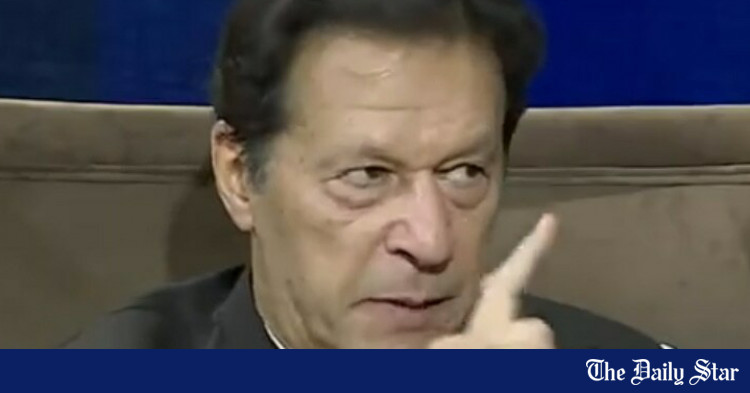 PTI chairman Imran Khan on Sunday told the military to stick to its stated stance of being “neutral”.

He also announced that his party’s long march to Islamabad for the country’s “battle for true freedom” would begin on May 25.

For all the latest news, follow the Daily Star’s Google News channel.

Addressing a press conference after his party’s central committee meeting in Peshawar, the former prime minister said the main demands of the march to the capital were the immediate dissolution of the National Assembly and a date for the next general election.

Regarding the military establishment, he said, “I also tell my army that you said you were neutral, so stay neutral.” However, he said he wanted to invite everyone to the march, including the families of public servants, military personnel and veterans.

Imran lashed out at the government’s economic management, saying the rupiah and the stock market were in rapid declines, which would lead to more inflation.

“They don’t have a plan or a roadmap. They can’t make decisions. They’re afraid to make decisions and they don’t want to burden themselves,” he said.

The PTI leader’s announcement came after the party’s central committee held a meeting in the provincial capital earlier in the day.

“Today we held our main committee meeting and made [important] decisions,” Imran, flanked by the who’s who of the PTI leadership, said at the start of his press conference. [question] was when to start the long walk, and we decided.

“I want to give a little insight into how we got here. There was a foreign plot against Pakistan by the United States. In this regime change they used the most corrupt locals, who were willing to be part of any plot to save their corruption.

“This conspiracy broke out eight months ago and I was alerted to it in June, and after August I fully understood what was going on. We did our best so that this conspiracy could be called off, but unfortunately we couldn’t stop him.”

The PTI President explained in detail his conspiracy allegations as well as the purpose of his march before announcing the date.

“The 25th [of May] I will meet you in Islamabad on Srinagar highway,” Imran said addressing his supporters and party workers. “You have to get there at 3 p.m. I invite all women because I have seen your anger. I had never seen this before.

“I want people of all [walks of life] to come because it is Jihad and not politics. I have decided and told my whole team that we have to be ready to sacrifice our lives.”

Imran said the march would turn into a sit-in and continue until his demands were accepted. “We will never accept them in any situation. No matter how long we have to stay in Islamabad, we will stay there.”

He said the march would have two main demands: the dissolution of assemblies and a date for elections.

The former prime minister called for fair and transparent elections, adding that if the nation were to bring the current government back to power, it would accept it. “But no country outside [be allowed to] impose them on us,” he added.

Imran told his followers to prepare in advance for factors such as “communication, transportation and fuel”, predicting that the government would use various obstacles to impede the march.

He stressed that the party has always remained peaceful in its protests, adding that the same will apply to the upcoming march as he called on women, children and families to participate in “Pakistan’s battle for true freedom”.

“The central committee will also come up with a plan on how to handle the expected arrests of PTI leaders and roadblocks to prevent them from marching on Islamabad,” he said.

Since his ousting as prime minister on April 10, Imran has held a series of large public rallies across the country, calling his ousting a foreign plot and urging the public to prepare for a march to the capital to put pressure on the authorities. authorities to accept his demand for immediate elections in the country.