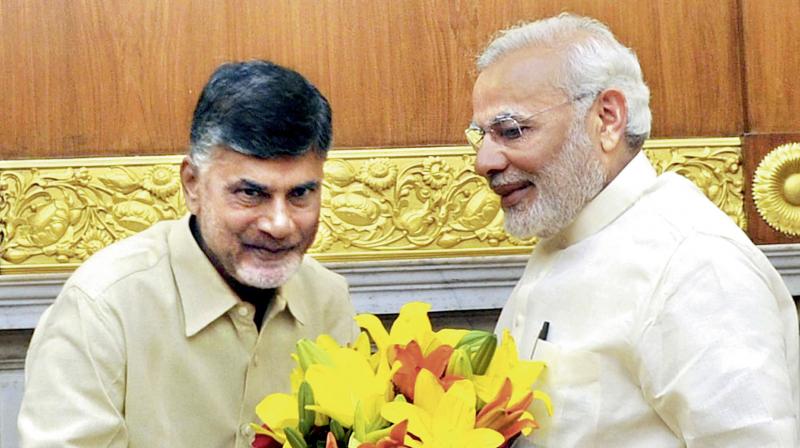 VIJAYAWADA: Telugu Desam leaders are delighted with the bonhomie between Telugu Desam leader N. Chandrababu Naidu and Prime Minister Narendra Modi after a four-year hiatus when the former CM met Modi while attending the meeting of the national committee of Azadi Ka Amrut Mahotsav in New Delhi on Saturday.

Naidu and Modi spoke to each other for five minutes privately. TD leaders hope their warm exchange will lead to the restoration of political ties between the BJP and TD.

However, CM Jagan Mohan Reddy skipped the meeting as he was due to attend two weddings.

While attending the national committee meeting of Azadi Ka Amrut Mahotsav, the former chief minister met with various leaders. After the meeting was over, Naidu asked PM Modi for a few minutes. The duo then talked to each other for five minutes side by side.

By the way, Telugu Desam suffered badly in the 2019 General Elections for Assembly and Lok Sabha after he severed his ties with the BJP and fought the elections on his own. Moreover, during the campaign trail in these elections, TD leaders including Naidu and movie star Nandamuri Balakrishna went out of their way to criticize the BJP as well as Modi. Naidu even participated in a dharna in Delhi against Modi. This ended up totally damaging the relationship between the two parties.

Sources said Naidu was trying to revive his political alliance with the BJP and Jana Sena with the upcoming elections in mind. Jana Sena founder K. Pawan Kalyan has already expressed interest in the alliance between the three parties. But there was no green signal from the BJP heads of state.

He pointed out to the Prime Minister that the PA’s financial situation is bad, there is an increase in corruption and the law and order situation in the state is deteriorating. The alliance between the two parties under the given circumstances will be beneficial to both.

Party leaders are happy that Naidu successfully met Prime Minister Modi. They hope that in the coming days, the political ties between the BJP and the BJP will be restored, to the benefit of both parties.