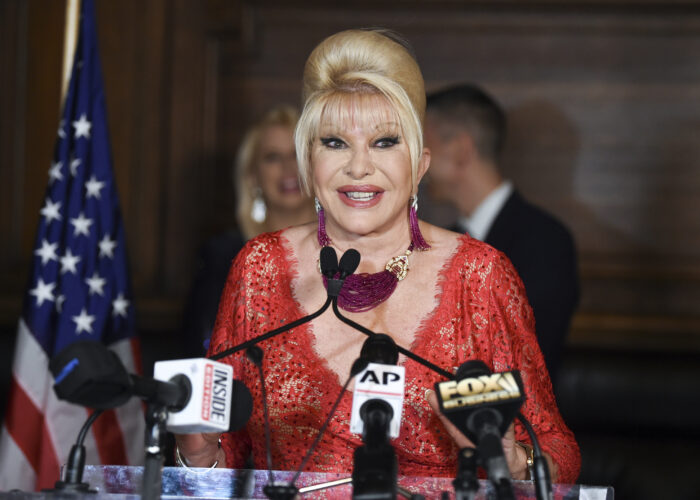 When ProPublica first reported that Ivana Trump’s burial at Trump National Golf Club in Bedminster, NJ, might be a tax benefit for her ex-husband, I was shocked that the former president could mix up the business with something as sacrosanct as funeral rites.

I was surprised, however, that 73-year-old Ivana, who died on July 14 after falling down the stairs in her home, chose to spend eternity in the Trump family grounds behind the first hole of the course. Ivana and Donald Trump had a particularly acrimonious divorce in 1992 after his affair with Marla Maples, who became his second wife. And though Ivana publicly supported Trump’s bid for president in 2016, one wonders if it was really her wish to spend it with a man she once accused of sexually assaulting her during their marriage ( an accusation which she later retracted).

I was hoping to conjure the spirit of Ivana for an interview about all this, but my Ouija board is out of order. So I could only imagine what the shed had to say about his final resting place…

They really spared no expense for the meticulous landscaping of Ivana Trump’s grave.

Costco flowers thrown in the dirt was a good idea, huh? pic.twitter.com/WDQ1n1grmg

Once, you know, I embodied an era of excess in New York. My jewelry was bigger, my limos longer, and my hairstyle taller than even my husband’s buildings. When he divorced, my brand became about surviving betrayal and glamorous self-sufficiency. I even had the most memorable line from the movie The First Wives Club:

Ladies, we need to be strong and independent. And remember: don’t get mad, get it all.

Now? It seems like I could spend forever watching people’s butts play at my ex-husband’s country club in New Jersey!

I may be dead, but where’s the waiter with my drink?

I don’t claim to have been St. Ivana. I took advantage of Donald’s questionable business practices. I lived a lavish life while we were married, and took some of his money (and the Plaza Hotel) when we divorced. And OK, I may have even claimed on TV after Donald became president in 2016 that technically, as Trump’s first wife, I was the real first lady.

I guess you could also argue that I spawned three of the most egregious examples of nepotism this side of Tori Spelling, but did I deserve that? I had told Ivanka, Don Jr. and, uh, Hannibal, I think, that I wanted to be cremated and have my ashes spread where I was happiest in life, in Dennis Basso’s furry chest. . Instead, I went from a view of the park to a view of grumbling men sweating in polo shirts. I do not rest in peace.

What I have seen in Bedminster so far is not pretty. There was Rudy Giuliani’s hair dye slowly melting down her neck until it burned a hole in the grass. I heard Tiffany calling Marla to warn her not to come near the stairs for a while. I saw Don Jr.’s fiancée, Kimberly Guilfoyle, swing her 4 iron wildly as she shouted at the ball that the best was yet to come!

I watched Melania sink into the lawn in her Louboutins, and Jared Kushner slowly turn around and smile at a photographer like Damien did in the final scene of The Omen. Donald even came over to let me know that I was a good deduction over the line.

Am I surprised that my final resting place is a likely tax haven for him? Go on. You should talk to Roy Cohn, his first mentor, if you want a surprise. He still can’t get over being abandoned by Donald as he died of AIDS after all the business tricks and maneuvers he taught him. There’s a reason Roy said Donald had ice water running through his veins.

I better say goodbye for now, someone else. Wait until you say Donald and the kids are going to be buried here too? Waiter!

Imagine dying alone and then being buried on the course of your second husband’s golf club. I’m not an Ivana Trump fan but man.