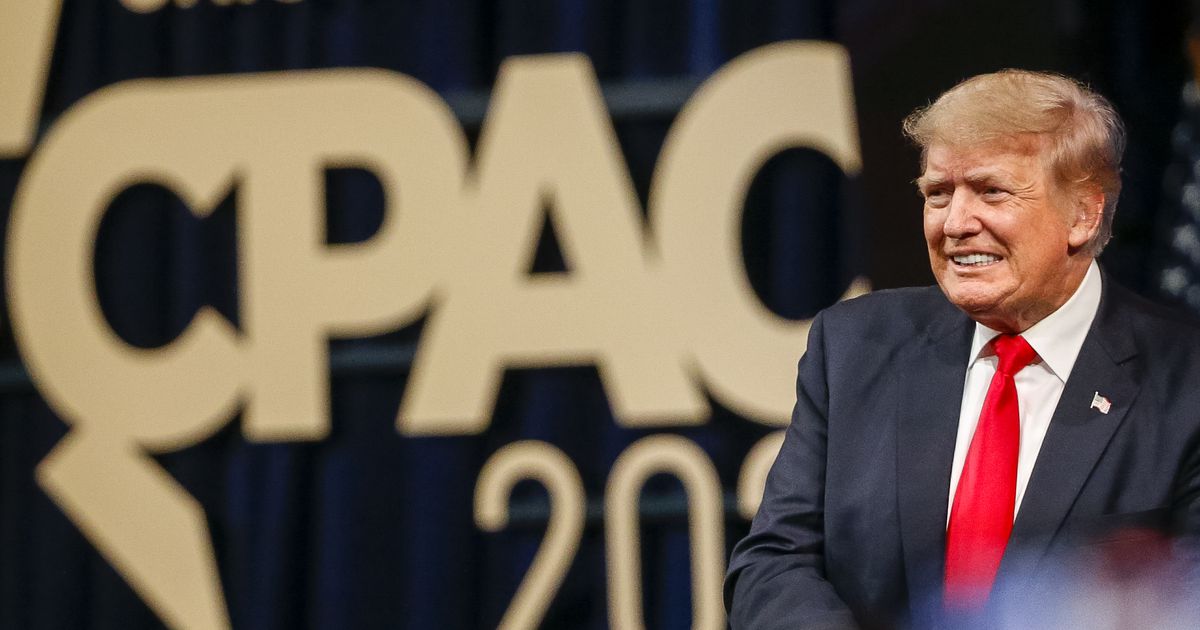 WASHINGTON Donald Trump brought his bleak view of Joe Bidens’ presidency to Dallas on Saturday night, warning that American civilization would crumble unless he returned to power and regurgitating his lies about the 2020 election.

The election was rigged and stolen, and now our country is being systematically destroyed. And everyone knows it… I ran twice and won twice, he told the Conservative Political Action Conference. America is on the edge of the abyss. And our movement is the only force on earth that can save him.

We must seize this opportunity to deal with socialists and fascists on the radical left, Trump said, rallying campaigners for the November election.

Persecution and grievances were recurring themes at the three-day Hilton Anatole conference, where speakers echoed Trump’s refuted claims that he had in fact won in 2020. Trump and others denounced the House inquiry on January 6.

Look what they do to President Trump. They understand they can’t beat him at the polls. They can’t beat his energy. They can’t beat his vision, former Trump strategist Steve Bannon told CPAC on Friday, two weeks after he was convicted on two counts of contempt of Congress for defying a subpoena related to the attack on the Capitol. American. They’re trying to put him in jail to make sure he can’t run again and 2024 and be the rightful president he should be right now.

Trump has been a rock star at CPAC for years.

He easily won a poll of attendees on Saturday, edging out Florida Governor Ron DeSantis 69-24 as the top pick for president in 2024. Sen. Ted Cruz was a distant third at 2%.

I said I better win that damn straw poll It’s an honor, Trump said, noting that he also got a 99% approval rating. When was the last time someone got 99% approval?

Nationally, just under half of Republicans named Trump their top pick in a recent New York Times/Siena College poll. And nearly one in five believe their actions after losing the election threatened American democracy. At CPAC, 91% of attendees said they would support Trump if he sought the Republican nomination.

Almost all of the progress we’ve made has come directly or indirectly from Donald Trump, conservative media host Glenn Beck said, warming up the crowd for Trump.

High on Becks’ list: the Supreme Court decision overturning Roe v. Wade and ending half a century of constitutional protection for the right to abortion. Trump installed three of the justices on the nine-member tribunal, cementing a shift to the right that would last a generation and endearing himself to conservatives.

Trump took the stage at the Hilton Anatole to the beat of Lee Greenwoods Proud to be an American, watching the ballroom at attention until the song was over.

A video was released just before he spotlighted a four-minute distillation of his case against Biden.

America, he says, has become a joke. And he said: We are a nation that allowed Russia to devastate a country, Ukraine, killing hundreds of thousands of people, and it will only get worse.

Fortunately for Ukraine, this greatly exaggerates the toll. The United Nations has confirmed the deaths of 5,327 civilians in Ukraine. Western intelligence agencies claim that Russia lost up to 20,000 soldiers and Ukraine slightly less.

Trump lavished his attention on Rep. Ronny Jackson, R-Amarillo, teasing that Jackson enjoyed being a White House physician even more than serving in Congress because he enjoyed looking at my body. He said I was the healthiest president that ever lived.

Trump blasted Pelosi for her visit to Taiwan earlier this week, saying she provoked China unnecessarily.

I have been impeached twice. She failed twice. The woman brings chaos, Trump said, claiming that by going to Taiwan, Pelosi played into their hands. Now they have an excuse to do what they do.

In Congress, Republicans and Democrats have praised Pelosi for refusing to let China dictate where U.S. officials can travel.

Trump has hit out at Biden for failings in the economy, border security and foreign policy, not always with the facts on his side, like when he taunted Biden for allowing gas prices to soar. arrow.

$1.87 a gallon, I got it down to… A friend of mine from California called me this morning. He just paid $8.55, Trump predicted. Hed quoted $8.25 the day before at a rally in Wisconsin.

Data from the federal Energy Information Administration shows the average is $4.13 per gallon nationally and $5.47 in California.

Prices soared after Russia invaded Ukraine in February, but have fallen 20% since the peak in late May. The low point cited by Trump came during the Covid-19 pandemic, when the economy had come to a standstill.

The latest average in Texas is $3.65, down nearly a dollar in two months.

Trump was in Dallas in July 2021, the last time the American Conservative Union held CPAC there. He feasted on four-year-old carols and told big stories about a rigged election.

No proof? There is so much evidence, he insisted then.

He also used the forum to downplay the violence on Capitol Hill on Jan. 6, when a mob of his supporters tried to block Congress from certifying Bidens’ victory.

He complained that some Patriots remained in jail months later, glossing over the fact that some supporters had called for the deaths of Vice President Mike Pence and Speaker Nancy Pelosi that day.

The Jan. 6 House hearings revealed that senior Pences staffers and security details feared for their lives, as well as the vice presidents.

Trump’s July 2021 list of grievances included his attorney general. Bill Barr, he complained, had refused to echo his claims about voter fraud or instruct the Justice Department to embark on a fishing expedition for evidence.

Barr has since testified under oath before the House committee on Jan. 6 that Trump’s fabrications in fact had no basis and recounted his refusal to follow through.

He used his influence to punish congressional Republicans who voted to impeach him in the Jan. 6 attack and to target state officials who refused to help reverse his defeat.

On Friday, for example, he fell in Wisconsin for a gubernatorial candidate against State Assembly Speaker Robin Vos. Biden won the state by more than 20,000 votes, and Vos resisted pressure from Trump to somehow reverse that result.