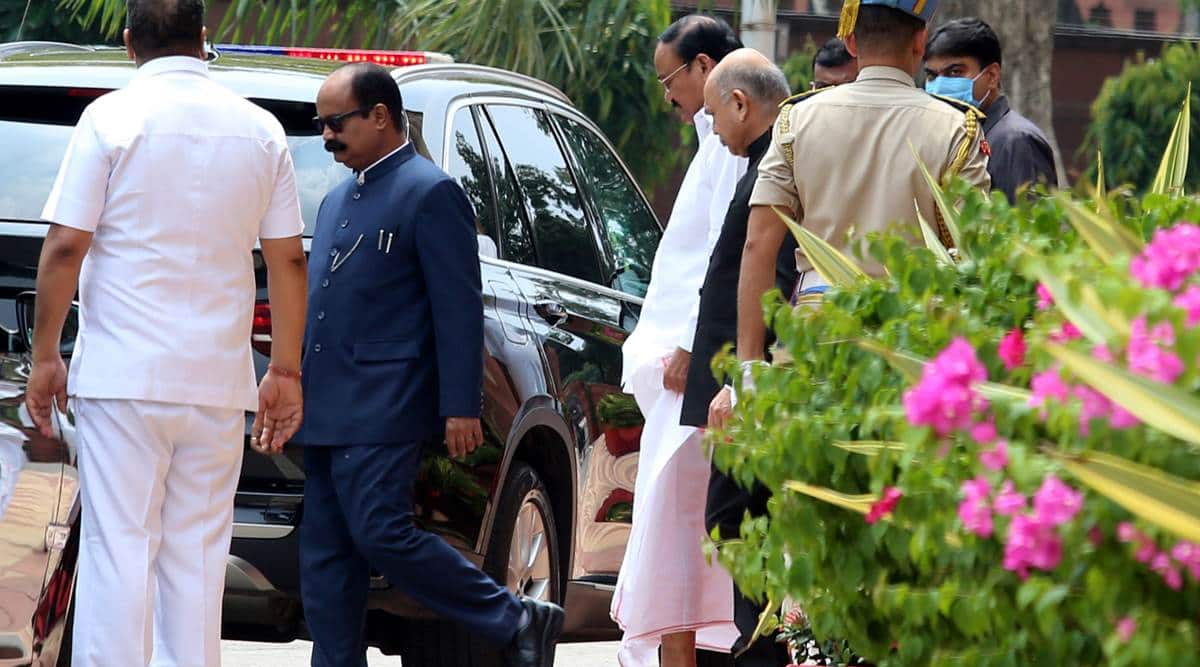 On Monday, Prime Minister Narendra Modi bid farewell to Vice President M Venkaiah Naidu at the Rajya Sabha, commending him for his witty words and encouraging parliamentarians to speak in their mother tongues and promote democratic values ​​during his very productive five-year tenure.

Naidu ends his five-year term as vice president on August 10.

Underlining Naidus’ penchant for words, your style of expression is as impeccable as it is unique, Modi said, adding that Naidus’ political background has reaffirmed his belief in the country’s linguistic diversity. “Your one-liners are also wit-liners and win-liners… There’s nothing more to say after that. Your every word is heard, preferred, revered and never opposed,” Modi said in his speech.

When there was a confrontation in the Chamber, we always heard you let the government propose, the opposition oppose, parliament dispose!, he said.

Under your leadership and discipline, the productivity of this House has reached new heights. During your tenure, Rajya Sabha’s productivity increased by 70%. Member attendance in the Chamber has also increased, the Prime Minister said, adding: There is both depth and substance in what Ms. Venkaiah Naidu Ji is saying; there is also warmth and wisdom in what he says.

Your one-liners are wit-liners. They are also winners. This means that nothing more needs to be said after these lines. Your every word is heard, preferred and revered and never countered: PM Narendra Modi, to Rajya Sabha, to the outgoing President and Vice President of Rajya Sabha pic.twitter.com/kWK7dgwXjY

Modi said this year’s Independence Day will be celebrated with the President, Vice President, Lok Sabha Chairman and Prime Minister born in independent India. “And each one of them comes from very humble backgrounds,” he said.

After the Prime Minister’s speech, Opposition Leader Mallikarjuna Kharge thanked Naidu for facilitating a discussion in 2012 when he was then Chairman of the Standing Committee on Article 371J of the Constitution which contains special provisions for the Hyderabad-Karnataka region. You have enabled MPs to speak in the 22 languages ​​of the Eighth Schedule of the Constitution and have given many MPs the opportunity to speak in their mother tongue. You have also encouraged and motivated MPs from non-Hindi regions to speak in Hindi, Kharge added.

TMC member Derek OBrien recalled how Naidu as a child lost his mother in an accident. I’m sure it will make a good story for your autobiography that you have to write, he said, adding, Sir, of all the happy things we remember is the good food you served us and the super host that you are. Not only you, but, I think, equal credit should go to Ms. Naidu.

DMK leader Tiruchi Siva praised the vice president for changing the colonial language of the House.

BJD leader Sasmit Patra thanked Naidu for encouraging young MPs in the House. Jairam Ramesh of the Congress said that there were two distinguished Indians from Nellore district in Andhra Pradesh who held the position of Vice President and President of Rajya Sabha…Dr. Sarvepalli Radhakrishnan and Muppavarapu Venkaiah Naidu…There is five years, when you took over, you started your innings characteristically by saying: If you cooperate, I can operate. Today, after five years of cooperation and operation, it is time to part ways, Ramesh said, adding that it was an emotional moment.

TMC Jawahar Sircar said that Naidu, under whom he served as a bureaucrat, recalled how Naidu gave him a gracious farewell from the bureaucracy. I am not comfortable with disruptive politics. I understand and support the need to protest. Protest is an essential ingredient of democracy… I have been blessed to have fair ministers like you, Mr Jaitley and Mr Javadekar and in the presidency, Sircar said.

RJDs Manoj Jha said Naidus your time is up [as Rajya Sabha Chair] haunted him even in the Delhi University classroom, as I checked the clock every three minutes expecting to hear the words.

CPM Bikash Ranjan Bhattacharya recalled the day he took the oath: On that day I took the oath in my mother tongue, Bengali…I think what impressed everyone was your concept of plurality.

A farewell message on behalf of the members of Rajya Sabha was presented to Naidu by Harivansh. In the message, the members of the Upper House said: As an immaculate wordsmith, you (Naidu) often added a touch of humor when tensions rose by weaving words together in a rhyming but meaningful way. Your oratorical talent mixed with instant wit and humor makes you one of the finest orators we have seen in our parliamentary system in recent times. “Sir, we are indebted to you for skillfully directing the operation of the House during the unprecedented Covid pandemic. Your concerns to ensure our personal health and safety during the difficult time while making the House functional will be remembered for times to come,” it read.

What, no proof? This does not stop Pakistani Imran Khan

Will technological innovation be the answer to our health problems?