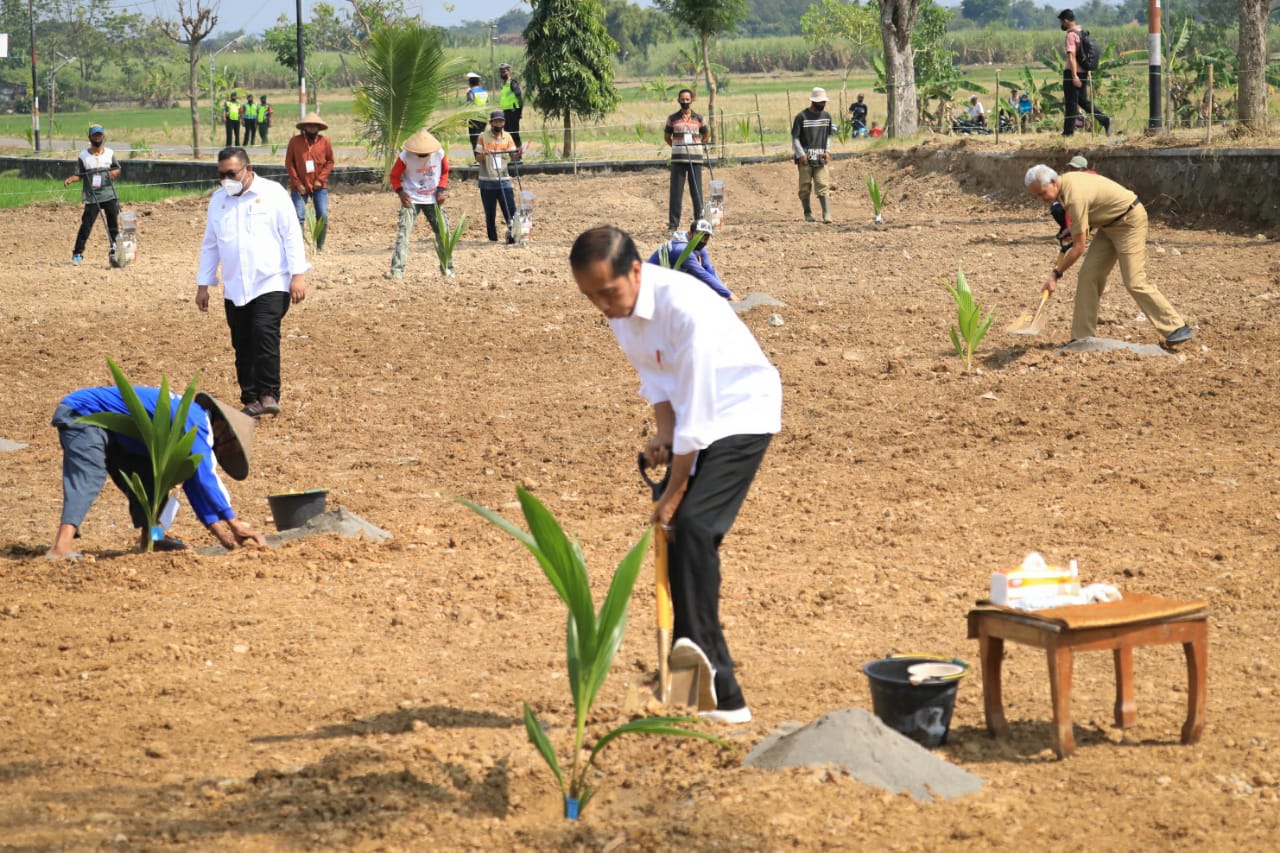 Around 09:20 WIB, the delegation of the Head of State arrived on the scene. Jokowi did not go straight to the point of the event, but first greeted the inhabitants of the village of Giriroto. Practically, the atmosphere turned rowdy, as locals jostled to greet the president directly.

Not far from President Jokowi, Governor Ganjar Pranowo also greeted locals who greeted him one by one. Ganjar accompanied Jokowi who distributed t-shirts to local residents.

During the event, dozens of farmers stood on the prepared land. In front of them are the President’s aide and the seeds of early maturing coconuts that have been planted. When the president had a dialogue with the farmers, Ganjar served the farmers who requested a photo with him.

Earlier, Mr. Ganjar asked who planted this. “I said yes sir, those are coconut seeds,” Ida said, practicing her conversation with Ganjar.

Ida said there were a thousand early maturing coconut seedlings planted at the event. He likes to receive visits and talk to Jokowi and Ganjar.

Here are a thousand coconut seeds, happy to have to help. Hopefully the economy will improve, Ida said.

Sari Widadyo felt the same. Feelings of pleasure and happiness in meeting President Jokowi and Governor Ganjar Pranowo, increased with the help of seeds provided.

The feeling is very happyvisited everybody is happy“Also, if there is help like this, people here are happier,” he said.

The 56-year-old farmer also received a message from Ganjar regarding President Jokowi’s assistance. According to Widadyo, Ganjar indicated that later the farmers could enjoy the harvests.

Of Niku “I hope that the income problem of this plantation can be used by the surrounding residents, and the results can contribute to the economy and progress of this village,” he said.

Another farmer, Nur Haryanti, was also happy. He had been waiting for this moment for a long time. Can directly meet and greet President Jokowi and Governor Ganjar Pranowo.

Nur continues to express her feelings about meeting Jokowi and Ganjar. Until the end of the event, Nur felt incredulous and trembling because she could take pictures with Ganjar.

Nur said the number of seeds provided was several thousand and of different types. From early coconut, corn, chilli, tomatoes to vegetable crops.

“I hope the farmers here can take advantage of what the government has given them and become more prosperous with this kind of help,” the 37-year-old said.

We hope it will be a new part of the development of the industry here, and the support of the Regent is good, the scenery will be beautiful later. “There’s a reservoir there, now it’s been successful for two years, you know,” Ganjar said.

President Jokowi said 46,000 early maturing coconut seedlings were distributed and planted in Boyolali Regency. In addition, seed assistance was also provided in Karanganyar, up to 44,000 seeds and 110,000 seeds in Sukoharjo.

It just started from here, later in the provinces where coconut can be good, we will plant it. The goal is around 1 million mature coconuts. But not just coconut. Previously, there were also corn and chili seeds, Jokowi said.

This method, he added, should be a solution to food security in Indonesia. Because right now, there is a food crisis and 300 million people in the world are starving.

“In several countries, it is estimated that if there is no solution, 800 million people will suffer from food shortages,” the president said.

Jokowi thinks Indonesia is capable of coping with the food crisis. Especially if the community can optimize the existence of unproductive land.

As for the pepper, it is a question for the households of the village of being able to cultivate it. In polybag or in the yard, so that there is no shortage of chillies or our prices have increased significantly, he said. (Central Java Public Relations) *ul

Issey Miyake a conceptual fashion designer for the greatest number